Help me pick a brush. Only from the lists given. Boar or badger, or, recommend one of each.

I've read a number of threads on brushes, and have pared down my lists. I only want a brush I can order from Top of the Chain, so other considerations are not on the table. I'm open to boar or synthetic. I'm looking for low-midrange price. I know nothing about knots. From what people have said, I think I'd say I'm looking for soft/very little scritch, and some backbone, but something mid-range, definitely not floppy. I've used a lower end boar in the past that I liked okay, and currently have a silver tip badger that has a stubby handle and large bulb brush, that I like quite a bit. I've posted two pics, one with the boars, and one with the synths. 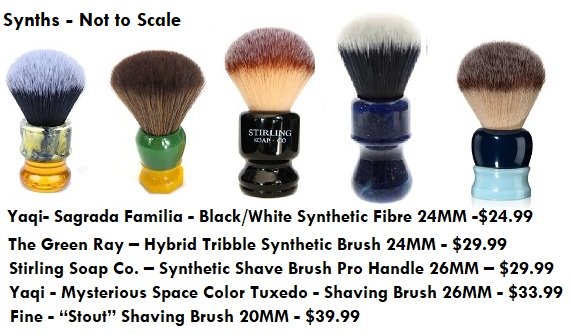 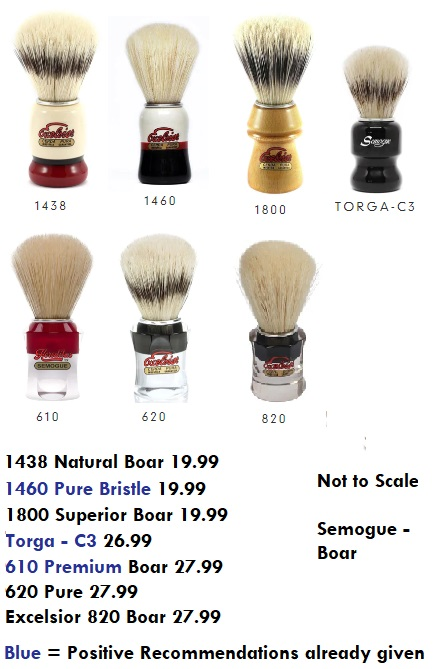 Well, our other female shaver on here(yeah plural) has the 620 in red I believe. I have the 610. Hers would be softer, she thinks it's the softest thing ever. She doesn't have badgers, but I do and I have another boar similar to it. It very well MIGHT be as soft as some badger, or it might at least be as soft as Simpson Best which isn't a bad place to be. By 610 might be a bit pokey, especially at first, but once it's wet it's not noticeable. The 620 might eventually become a mop if it starts out that soft, can't say for sure. The Torga is a bit more of a premium offering, but I think the knot is the same. The ones that have handles that look bit are big and can feel bottom heavy. The 820 has a fatter handle, the 6s have a slim waist that doesn't slip out of your hand. I better leave it at that, there are a couple people that I can think of that will likely be in shortly to add their two pence.

I've never used a synthetic from Sterling, but, loved their badgers. From the Lists I can only comment on the 1800 and Torga, both of which I like. I would take one of those three from the choices given.

Didn't you say "Boar or badger" - did not see any choice for badger.

I have tried badger, boar and synthetic. Personally I think modern synthetic brushes are so good, and so convenient, that I'll never buy anything else. Just pick a handle you like. There's no need to spend a lot of money either.

From your list I had the Fine Stout and it is a great brush. One my favorite brushes. I did replace it with a Chubby 2 synthetic.
From your boar list I really like the 1800 Semogue. My favorite boar by far.
I think you would be very happy with both of those brushes.

The Semogue Torga is a great brush, suggest you get it in C5 though, not C3.

I selected synthetic brushes on Top of the Chain... then sorted them low to high in price. There are quite a few (18, if I can count... the jury is still out on that one) that are just under $30 from which to choose.... People seem to like the Simpsons T1... that's there in price...the T2 is $9 more.

Too many of the boar brushes are sold out at the moment... so the selection is sparse, as you already know.
Last edited: Apr 23, 2022

I would recommend the Semogue 620. Once it is broken in, it is very nice.

Abz88 said:
The Semogue Torga is a great brush, suggest you get it in C5 though, not C3.
Click to expand...

I'd also consider a Zenith boar. In my opinion the unbleached Zenith boars (see Your Shaving in Europe) are, once broken in, very excellent brushes.

I have a Yaqi brush (24mm) and really like it. I did have a Stirling synth and didn't care for it - too flingy.
B

Any of those will do fine. Draw straws and pick one. Any one.

I'd also consider a Zenith boar. In my opinion the unbleached Zenith boars (see Your Shaving in Europe) are, once broken in, very excellent brushes.

I've got the 610 and it's one of my favorite brushes.I was so happy with it i used it exclusivley for about 6 months after i got it my other brushes never got a look in.I face lather and to me it feels like silvertip quality tips with good backbone and a gentle scub.It got better and better the more i used it.Great little brush IMO.
S

I can stand by anything from yaqi/wetshavingco/oumo. They have great service, great products and pretty much unbeatable prices in the synth space. I haven't used the specific one in the picture, but the timberwolf knot gets plenty of praise around here.

Desrgrl..... Were you able to come to any conclusions and make your purchase? I don't think I was helpful but a lot of the people who responded have experience with brushes on your short list.....

Semogue 610 boar has become my favorite brush. Now pretty well broken-in, it’s a great balance of scritch and softness, and produces great lather from both creams and soaps.

Rudy Vey said:
Didn't you say "Boar or badger" - did not see any choice for badger.
Click to expand...

"boar or synthetic". I currently own a LiJun Silvertip badger, it's still in a pretty good condition, its seven years old, and has started to shed a little bit. I've used a basic boar in the past that worked well enough. I have no experience with synthetic.

I thought by getting a lower/mid priced boar/synth, I'd have some exposure to them, and a back up brush...and when the time comes, I might have a better idea if I want to go with a more expensive one. I may very well just drop the money for another good badger (Mine was somewhere around $100), but it was nice to dip my toes back into either trying boar again, or introducing myself to synth.

Happy Jack said:
I have tried badger, boar and synthetic. Personally I think modern synthetic brushes are so good, and so convenient, that I'll never buy anything else. Just pick a handle you like. There's no need to spend a lot of money either.
Click to expand...

Out of curiousity, are there any synths out of the ones I listed that you've had personal experience with?
You must log in or register to reply here.

Brush Review - happy with what I've been given.

A
Looking for advice for 3rd brush purchase! Boar vs synthetic?
2