I have this razor with me for past couple of days. Can any body help regarding make/model of it. It has no marking except number 7 on basepl plate. 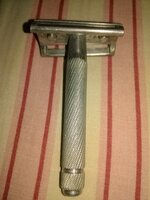 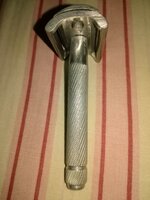 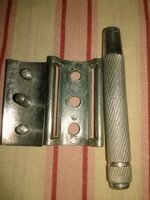 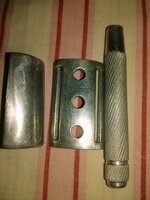 DDR-era Golf. I have the same in my collection.
F

Moderator
Interesting razor, thanks for sharing it with us.

Golf was a brand by Louis Perlman, who was located in Solingen and Leipzig. After WW2, the Leipzigbranch continued as Golf. Possible that it later became part of Erfa/Brillant, as I've seen them share parts, but that is, for now, speculation. As with all DDR goods, the older they are, the better the quality. This is somewhere in between: not bad, not good.
Doesn't shave half bad. Pics won't add much: mine is exactly the same.
You must log in or register to reply here.
Share:
Facebook Twitter Reddit Pinterest Tumblr WhatsApp Email Link
Top Bottom