Brief background, I have my straight and since the Xmas I received it a few years back, it's been my only razor. I've taken it to my scalp several times, sometimes to better results than others. Nicks don't bother me and I accept that it will just take time to get the angle right on the back and sides of my head, but I need a backup to finish the job when the edge has gotten a little too tired or I just don't have the time to go slow with the Dovo. One day I'm sure I'll add another straight to the collection to make regular head shaving easier but for now I think a DE fills my need better and still gets me away from the damn clippers.

Budget is a bit of a factor, I'm not looking for the cheapest razor out there but I am looking for good value. Long life, minimal maintenance, good performance and a reasonable price, not too aggressive (though I doubt any would be as aggressive as when I've gotten a bit too steep with the straight razor).

I've been strongly considering the Henson medium. As I hear it the medium is still pretty mild and easy to keep the right angle, the price is at the higher end of what I'd like to spend.

I'd love to hear some other suggestions if anyone has some opinions they'd like to share.
N

If you shave daily and/or have sensitive skin (like me) the Henson Mild is a great option.
The Winning razor is sort of a stainless steel version of the Henson with more blade feel, yet staying mild. You can grab that for $50 from wet shaving club.
The RazoRock Game Changer is also a great option.
S

Game Changer .68 is the best DE razor that I have used in shaving my head.

Henson medium is my go-to DE for shaving the dome. The Leaf is even better -- excellent efficiency in both BBS shave and time. The pivoting head follows the curves better, and the blades you select are of higher quality than cartridges.
H

I appreciate all the feedback guys, looks like I've got a good short list going now.
N

Leaf razor didn't work well for me.
The blades seemed to be finicky a lil bit to set perfectly straight. And the head seemed way too flimsy.

This same question was just asked a couple of days ago, might find some useful advice in that thread.

One of the many nice aspects of B&B is the variety of hardware used by its members. Being a beard and head shaver, I am under the impression beard shaves and head shaves differ somewhat. Most advice seems to be about beard shaving, and I learn a lot from those threads. Since I am currently a DE...

Ah ya I read through that one, my thinking was there were some slight differences in our questions but I probably should've posted mine in that one, new to forums so not great with the protocol yet.
I went with the al13 medium in the end, the boys aren't too far from where I live and I like their philosophy. Can't wait for the first shave.

My Buddy always uses his Gamechanger 84 for the head. The biggest benefit are the covered blade tabs.

I use a Henson mild as well as a Leaf razor on my head. Both do an excellent job although lately I've been reaching for the Henson more often than the Leaf. Since you normally shave with a straight I would imagine the Henson medium would be fine.

Contributor
Have a look at slants. One of the best and also one of the least expensive is the FOCS -- Fatip Open Comb Slant. There's an SB version as well if you would rather. Also the two current Merkur slants (37C short handle; 39C long handle) are both good mid-range slants and do well at head shaving.

I use all de razors in turn to shave my head, including designs that are considered aggressive or gentle.
The time spent is almost the same.
Now that you are familiar with using straight, I think you can shave your hair well with any de razor.

The Henson AL 13 medium is a superb razor

Contributor
Henson medium is a good noggin razor. My favorite (although not budget) is the Timeless .95. But if you really want to go budget and get a great dome shave, the Silver Star 3 pc razor is outstanding. You can usually pick them up under $20 USD. It's easy to maneuver, is mild enough not to bite and efficient enough to get that smooth feel I enjoy. I'm stealing someone else's image, but this is identical to mine: 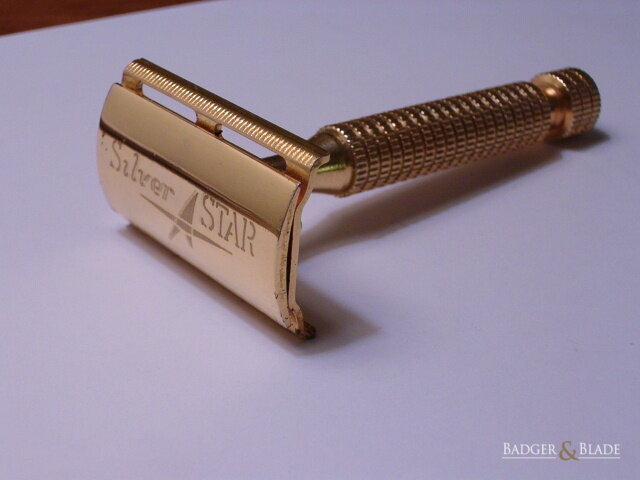 The wealth of knowledge in this forum is very impressive, I appreciate everyone's input a lot.
Because comb was mentioned, and since it's something I've had trouble getting real specifics on with Google searches, could someone break down the actual difference between closed and open comb? I'm assuming they're the "teeth" on the edges of some razors and exist to raise and distribute the hairs but as far as using that to discern how one razor may perform compared to another according to the type of comb is beyond me.

Day one with the Henson medium yesterday, decided to scrap the beard and get a little practice with it on my face before my scalp, new to me soap that apparently I wasn't loading sufficiently in a likewise new scuttle. After two passes I was pretty pleased, surprised at how little feedback of any kind there is on the razor, felt reasonably idiot proof to boot.

Today day two, got the razorock scuttle warming with the Henson and brush and the razorock green blooming, quick shower, 45s loading the brush, 90s whipping a lather, a little proraso eucalyptus preshave the worked top down 2 passes head, neck and face. On top I treated each zone independently as far as direction of passes, face was WTG, XTG. Hot rinse, cold rinse, proraso aftershave.
Everything above the collar bone except my eyebrows in 30 mins including working the soap. Lather still had a touch of warmth on the final pass. I think this is the new routine I needed and that Henson does a pretty good job at giving a good shave quickly.
You must log in or register to reply here.

Of Blades And Razors

The Sixth and Final Razor

Friday at 11:52 PM
Themadshaver18
T
L
Help guestimating a Wolfman plate based on my current razors