Have i found the perfect razor?

tehnothing said:
There are some very pretty vintage razors. I have PIFed, donated, or sold off many. There are a few rare ones though that I lust after, and, they tend to be very expensive now of days unless you can find one in the wild.
Click to expand...

Some of my favorite pretty vintage razors are the old brass Gem/E-R razors. They polish up extremely well with Flitz and elbow grease.

If they're in great mechanical shape they can look very funky and yet be easily polished to a beautiful state. 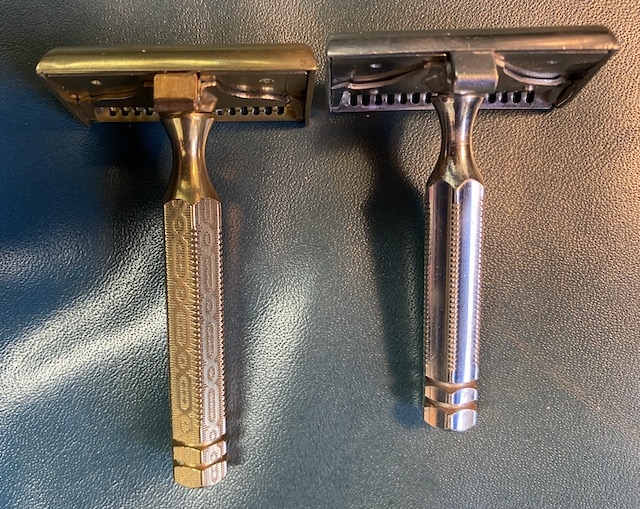 These are not the ones I'm thinking of. I have other posts in the same time frame, and lots of other information on these razors, so explore the next few posts if interested in old brass razors, GEM and E-R mostly.

Remember to click on small photos. If they're thumbnails they will enlarge.

I have other posts in the same time frame, and lots of other information on these razors, so explore the next few posts if interested in old brass razors, GEM and E-R mostly.

Remember to click on small photos. If they're thumbnails they will enlarge.

That Micromatic in the center is gorgeous.

tehnothing said:
That Micromatic in the center is gorgeous.
Click to expand...

Indeed. Boy, did I get lucky there or what. Since you're interested.

I tried the suggestion to cork the Feather blade, and yeah it worked super well. Perfection now.
I did find the perfect razor. I think it worth 10x the price of the Vander Hagen for sure. No post purchase regret and no real acquisition disorder for razors and I doubt I will find one that can do better ever.

I will try more blades though.

Contributor
I pulled up the sharpness testing to see about what a corked Feather would be and see what other blades would be similar on the first shave since you are only going to use them once.

The Permasharp would be a good candidate, but it may sharpen up too much. Price is high for single use.
The Nacet would have the same warning, but the price is good.
The BIC similar story, similar price.
Personna Plat, either Israeli or German, would be my choice based on sharpness and price. They won't make as big of a jump in sharpness as the above and if you shop around, you should be able to get them 16 cents.

From there, everything else starts out duller due to the coating or just is duller due to the blade design. I wouldn't cork any of the above due to the risk of them sharpening up too much and would advise caution with most others. But do try corking ones that feel like they aren't cutting, to remove the coating, before giving up on them.

kingfisher said:
The little crossbar that could potentially damage the blade if the razor is fully closed is a deal breaker for me. I salivated over the razor through the entire creative process but am not interested in it until they fix that problem. I choose Western-style shavettes over kamisori-style razors because I like to close the razor, protecting both the blade's cutting edge and people's fingers.
Maybe if they make a version 2 that addresses this issue, it will become the world's best replaceable-blade straight, but for now, it is still playing second fiddle no matter how well it shaves.
JMO, YMMV, and all that.

I now return you to your regularly scheduled thread.
Click to expand...

They fixed it. They are now shipped out with a rubber insert to prevent blade damage. People who already have an Essence can contact Manuel to get a free insert.

Babou said:
The day I have a wife she will become a subject of science for me, I should observe his activities and keep a journal. Maybe women shave better than men, maybe they have a lot to teach us about shaving

Let the ' science' begin my fellow €-lander and get married Asap !..

Have 12 razors and have tried ( so far) about 12-15 types of de and single edge blades . Hard to beat a Feather ASD2 with their own blade, though. Absolutely synergistic! Feather razor WITHOUT their blade just doesn’t have the magic, though, for me.

Jeffb28451 said:
Have 12 razors and have tried ( so far) about 12-15 types of de and single edge blades . Hard to beat a Feather ASD2 with their own blade, though. Absolutely synergistic! Feather razor WITHOUT their blade just doesn’t have the magic, though, for me.
Click to expand...

My wallet did NOT need to hear this. Hopefully @Oliviamaynard won't read this and gloat!

FarmerTan said:
My wallet did NOT need to hear this. Hopefully @Oliviamaynard won't read this and gloat!
Click to expand...

I love my razor!

Oliviamaynard said:
I love my razor!
Click to expand...

Good for me that I'm cheap! I'll just use an old Tech from around my birthday and pretend it's expensive!

FarmerTan said:
Good for me that I'm cheap! I'll just use an old Tech from around my birthday and pretend it's expensive!
Click to expand...

I just love the feeling of stainless steel

Oliviamaynard said:
I just love the feeling of stainless steel
Click to expand...

I only have Stainless Steel handles, I believe. Those are definitely a different "feel" than old tarnished brass.

Some day I'll end up with a stainless steel razor head, I suppose. Old brass smells kinda like an old penny when it gets wet.

Yes, I am a guy that goes around smelling spare change...... probably how I developed my immunity to Covid!

syljal said:
The feather AS-D2 is my daily driver and i adore it. For myself you dont have to search for another one, you have a gem in your possession
Click to expand...

Oliviamaynard said:
Yeah I think I found the perfect one.
Click to expand...

I use this most days. For me with my light beard it's as perfect as perfect can be - weight, feel, grip, etc.


Oliviamaynard said:
TBH the Feather is kinda just still too sharp on the first shave. I got some irritation. It did go away pretty fast after I got out of shower, but to me what I really want is perfect on first and maybe second then toss the blade and start new every shave.
Click to expand...

You might try Lord Super Chrome, Rainbow, Astra SP, Gillette Silver Blue and Wilkinson Sword Black in addition to those suggested above. All of these work well for me. I find most of them are in varying degrees less sharp than Feather but overall smooth. Of course as always, YMMV.

I've tried Timor and these don't seem to work well in the Feather. It's a strange blade that we don't hear much about.

ivan_101 said:
Don't pay attention to them telling you to buy another razor (and another and another). Just enjoy. Trying new blades and soaps can be enough fun.
Click to expand...

Atlantic59 said:
If you have used a 1950s post-war brass Gillette Tech, the ASD2 is very similar in shave feel to that. The Feather is made with high precision using nicer materials, of course. The Feather has a longer handle, also.
Click to expand...

FarmerTan said:
Good for me that I'm cheap! I'll just use an old Tech from around my birthday and pretend it's expensive!
Click to expand...

It IS expensive if you would have invested the $1.99 in IBM, then Microsoft, then Amazon, then Bitcoin, then Tesla…. You’d be a gajillionaire if you invested that money. Instead you bought a stupid razor!
You must log in or register to reply here.

An easier way to get the funk out of boars? I may have found one.
2

R
Down the rabbithole of blade coatings...