Guess what the highest rated shave soap on Amazon is? Go ahead. Guess. 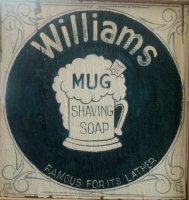 Not really. Vintage Williams is an excellent shave soap and doesn't take a back seat to anything.

JCinPA said:
I'm LMAO right now. I am sure many folks here won't see the average Amazon rating as anything definitive, and I'm not saying it is, BUT ... the top dawg is (drum roll, please)

And right on their heels ...


The reason I find this so funny is that when I joined the forum here about ten years ago, I was switching from the multi-bladed monstrosities to traditional DE safety razors. But I had been using Williams in a mug with a brush since I started shaving in high school in the 1970's. When I joined here and folks learned I was using Williams shave soap, many were not just horrified, but almost sounded offended.

A few years later after I was shamed out of my Williams in favor of 'better' soaps and creams, lo and behold, there springs up a Williams shave soap brotherhood. lol. And they were doing what I had learned to do and did pretty much all through my ten years in the Air Force, which was to drop the soap in a mug, drop a cheap brush on top of that, fill it with water and let it soak while I showered. In fact, when I started using the multi-blade cartridges I just shaved in the shower. I got awesome slick lather. I never knew I was doing it wrong until I showed up here!

I just ordered a 3-pack of Williams to get reacquainted with it because I have not used it in ten years, but the love around here for it makes me chuckle more than a little bit. I had one of their 1976 Centennial pewter shaving mugs I got in college with the top off a Williams box and something less than $5, IIRC, but I lost it in one of my many Air Force moves. Just on a lark, because I suspect I'll enjoy the Williams when it arrives, I found one of those old mugs on the 'bay, and it's on its way, as well.

My original shaving kit consisted of the Schick Adjustable injector razor (numbered dial), an Ever Ready shave brush I got at the local drug store, Williams shave soap, and an old coffee mug. My granddad taught me how to shave, my father was an electric razor guy his whole life. Eventually I went the Barbasol, then Gillette Foamy way for a bit, finally discovering Pinaud's canned shave cream when I discoverd Clubman A/S and used that through college. I went from the Schick injector to the Gillette Trac II when it first came out, and then down the slippery slope of all their subsequent cartridges. But when I joined the Air Force, I had some neck irritation and decided to go back to the Williams and used it for decades until I joined B&B and was told it was double-plus uncool.

Once I joined here I started with the EJ DE89 (several) and went through a bunch of vintage razors, finally settling on the Merkur 34C HD for the last 5 years or so. But I decided to try Williams again, and also grabbed an old Schick adjustable off the 'bay just for fun. Figured I'll revisit my roots. When I get my Williams and pewter mug, I'll grab an old brush I've been meaning to restore and have a "John's Hih School Shave" thread.
Click to expand...

Your history is much like mine but I mostly use Arko now since I like to face lather. Williams and Arko have a similar scent and are equally cheap but I find Arko has a more stable lather.

If you want to see lather, use it in the shower sometime!

Williams aficionados are an interesting lot. It’s important to remember that the modern Williams is not the same soap that was used by our fathers and grandfathers, and it is not the same company either. The box graphics are pretty close though.

I remember a post, somewhere in the abyss that is the B&B soap forum, when someone asked the current company when Williams was reformulated. They answered in effect, ‘it’s never been reformulated’. And they’re correct, they haven’t reformulated during their ownership of the brand. They don’t know, and probably don’t care what came before.

Contributor
Although I’ve been wet shaving for a few years ago, I had never tried Williams before. This thread got me curious, and I picked up a puck on Amazon for ~$2.00. I tried it out today.

I really wanted to like it—such a rich history. It was some of the weakest lather I’ve ever made. I know that some here love it and say you need to use it every day. I’m just not willing to invest the time to figure it out. If I wanted to use a super cheap soap I would just go with Arko, frankly, which outperforms it considerably, IMO.

Ambassador
ARKO! outperforms Williams for me merely by being in my house. Williams supposedly arriving today.

wibbleandstrop23 said:
That’s how I learned to shave. Mug, cheap boar, Palmolive stick instead of Williams stuck in the bottom of the mug and filled with water. The lather was fantastic.
Click to expand...

Same with me, except back in the day you could get Colgate shaving soap in a puck. It was great stuff.

dabrock said:
Amazon reviews? The same place were you see a ton of reviews that say "FIVE STARS! My husband just ordered this and he can't wait to use it!" That Amazon?

Not saying a lot of people don't find Williams a good shaving soap, but a lot don't and Amazon reviews are just not something you should rely on for any product.
Click to expand...

As one of Amazon's more frequent reviewers, I can confirm that the majority have the discernment of a grapefruit. Possibly including me.

Expensive shaving soaps are a bit different than bargain ones. Sometimes a reformulated shaving soap is not the same as in the past.

If it had a better scent I'd use Williams. I didn't have an issue with the performance, the scent was just plain for my liking.

Ruva said:
If it had a better scent I'd use Williams. I didn't have an issue with the performance, the scent was just plain for my liking.
Click to expand...

luvmysuper said:
It kind of "grows on you".
Like Tabac.

On a side note, I understand why some people think it smells like Ivory, because they are both rather mildly scented, but really, it doesn't smell much like Ivory.

Used it this morning and the lather was excellent. My pucks have barely any scent. It just smells like light soap at this point.

Contributor
Ambassador
Well, I decided to use all the equipment I used when I learned to shave in High School, minus the Thayer's this was my starter gear. Not original, found on the 'bay.

And as I've mentioned earlier, I don't think Williams is great stuff, it's a middling performer, but it works. I was just amused by being told I could not possibly be using it when I first joined the forum. Soaked the new puck in the mug over night. Left the brush original, because it's not too different than what I remember shaving with in high school. Was a great shave. Link to it in Shave of the day here

Thomas Crown goes to Italy... Simpson Trafalgar T3 Proraso Red Gillette Brazilian Goodwill Feather (2) The Proraso Red makes me feel as if I’m about to enter Antico Caffè Greco, in Rome, for an espresso and a cornetto, before going to office. The fact that Proraso is from Florence and I’m in...

Anyhoo, sorry for the ugly mug. My face, not the pewter mug. Lather was fine, you lather on the puck the whole shave, don't take it to another bowl. Fun shave today. Pic of my gear if you don't want to hit the link. 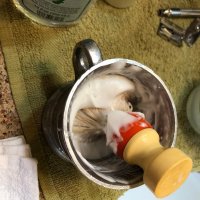 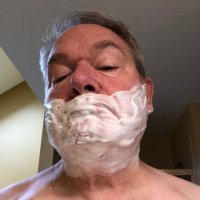 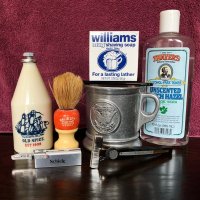 Contributor
Ambassador
I must add that there is one great reason for many of us with hoards of different soaps to own/use Williams Mug Soap.… it almost never goes bad.

I have had the same puck of Williams in a steel mug for likely 15 years and it still performs as it did when new. I.e. just ok.
You must log in or register to reply here.

Tips sought for Men Only Shaving Soap No.3