I admit that it was a bit cheating in the title, but I am very happy to find this limited number of coins, although many people already own it in B&B. 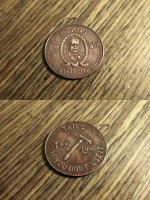 On the heads side, there is Mr. Gillette’s portrait + "you win / if you use Gillette safety razor"; the tails side is a single ring pattern + written "you lose / if you dont use it", and there is a tiny foundry name "THE" on the bottom edge. WHITEHEAD & HOAG CO.」.
.
There is not much information about the coin. Some online sellers claim that it was issued around 1930, while some can only estimate a wider range of manufacturing ages.
.
However, I personally guess that it was a product between 1905 and 1908, based on the following.
1. Age of positive logo:
(1) The coin is still the standard word "Gillette" used alone before 1908, which is different from the diamond-shaped "Diamond and Arrow" logo used in 1908.
.
2. The razor pattern on the back:
(1) The "Gillette single ring" on the back was manufactured around 1905~1929.
(2) In 1914, the new "bulldog handle" was launched. It was not reasonable for the relatively high-cost advertising coin to promote the old razor, so it is more likely to be a pre-1914 publicity.
.
3. Mr. Gillette's political stance and financial reasons:
(1) Mr. Gillette once invited Teddy Roosevelt to participate in his socialist ideals and was rejected, and Teddy Roosevelt's reign was from 1901 to 1909.
(2) The evidence in support of the previous point is another version of the coin. The text on it is the same as that of the foundry, except that the front and back patterns are replaced with the "elephant head/tail" pattern representing the Republican Party and the words GOP.
.
Considering the above points interactively, the possibility is the greatest between 1905 and 1908, the issuance period is short, and the output is naturally less; also due to the unpopularity, there will be no troubles of counterfeit currency and speculation.
.
Fortunately, its condition is quite complete, but it can be seen that the former owner has played with it for a long time, so there is some dirty rust caused by hand sweat/dirt. Although it is more valuable to retain the original color of antiques, I really don't like the dirty rust feeling. I carefully removed the thick and floating rust, so that it can re-oxidize to a more uniform color in the future.


Take half a wooden clothespin to make a coin display stand. 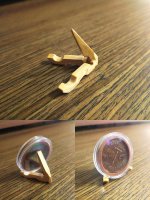 Thank you gentlemen for reading.

That is awesome !!! would love to find one of those for the collection !

sliwolf said:
That is awesome !!! would love to find one of those for the collection !
Click to expand...

I am also very fascinated by it, and when I find it I almost jumped up.

I am honored to see that the Gillette head on the blade package has been made into an engraving, as well as the fine lines of the single ring handle. What's more interesting is the history it reveals.

Thanks for sharing it.

Contributor
Cool, I have never seen one before.

Moderator
Nice token. Nice display stand. Nice all round. Thanks for sharing it with us.

Thank you for your kindness. I dare not fully guarantee the correctness of these histories, because the relevant information is really scarce, there are only a few forum discussions and some "for sale" eBay pages.

It seems that this is not a popular item for the razor hobby and coin collection, so I can only piece together clues by myself.


cryhavoc said:
Cool, I have never seen one before.
Click to expand...

I didn't know it until this year, and I have been hoping to find one.


ajkel64 said:
Nice token. Nice display stand. Nice all round. Thanks for sharing it with us.
Click to expand...

Hope my bride will not find that a clothespin is missing.
You must log in or register to reply here.