inhave heard many things about whether or not good dollar razors from the blades from is carbon steel or not.

Also what about the grim dollar.


And finally i have heard they have a host of problems when taking the to get sharpened.

What should I look out for

The Cutthroat said:
inhave heard many things about whether or not good dollar razors from the blades from is carbon steel or not.

Also what about the grim dollar.


And finally i have heard they have a host of problems when taking the to get sharpened.

What should I look out for
Click to expand...

GD is fine steel, depends on model how finishing quality is.

grim dollar looks like a higher end GD model in finish from the pics at CS. the scales are interesting. i’m sure it works fine.

i have seen this model with other names for a bit cheaper iirc recently.

the GDs at the low end can suffer from big shoulders, uneven grind, warp. All can be addressed with some work. not the prettiest unless you mod it to look good after, if you care to.
B

Gds are good steel inexpensive razors. They're inexpensive. Did I say they're cheap? Lol. The scales are very flimsy but functional. I shave with them very often and have never broken a set of scales. The blades themselves are beefy and heavy which means you can hone the snot.out of them and.they wont.wear.out anytime soon. Another alternative is the zy razor. Same steel and.maker but with no heavy shoulder and the stabilizer is removed. They also have an edge on them as well .So honing these would be easier than the GD. These can be found on eBay and Amazon for $10 or so. I think for someone trying to see if a straight is for them you can't go wrong as well as for practice honing. You wouldn't want to spend $150 or so on a fancy one to practice. You will make mistakes honing. Everyone does. Make them on these. Carbon steel rusts. Whether it's a $5 one or a $500 one. So care is needed which you will learn. If you decide you love it then by all means get something that looks better in a sotd post. Lol. They shave as well as they're honed like any other razor.

I've picked up three GD 66's at like $5 each and spent a few hours getting the best one to be a surprisingly good razor. I think I've ground and honed away about 1/5 of the steel to lose the stabilizer and correct wonky geometry, LOL. That done it shaves really well.

If you buy one, recognize it'll take some work. If you dig that kind of thing, it can be satisfying. If not, expect some frustration.

I bought a GD 1996 last year and, once I spent some time honing it up, it gives great shaves. There’s no stabilizers to be concerned with and the blade is a nice width. I think I paid $13 for it. Honing a GD might be too much for a beginner SR shaver.

I got an infection from my gold dollar. It abraded me in it’s initial “shave ready” shave, and in spite of what I thought was sanitizing it, I wound up with a mess on my cheek that took weeks to clear up. I later reworked it and it shaves nice now.

That, and their theft and use of Portland Razor Co.’s production photos for their own promotional material has kind of turned me off on them.
T

So does this mean they are carbon steel or stainless

Scarry Knight said:
I got an infection from my gold dollar. It abraded me in it’s initial “shave ready” shave, and in spite of what I thought was sanitizing it, I wound up with a mess on my cheek that took weeks to clear up. I later reworked it and it shaves nice now.

That, and their theft and use of Portland Razor Co.’s production photos for their own promotional material has kind of turned me off on them.
Click to expand...

Do tell us more. I have heard nothing of this.

Me, I don't care for straight out of the box Gold Dollars. To me, the shave is very meh, even if I hone it myself. What I like them for is as nearly raw material for modification. You can turn that 19 degree plow horse into a 16 degree thoroughbred, if you work at it.

The razors below are all Gold Dollar #66 razors. 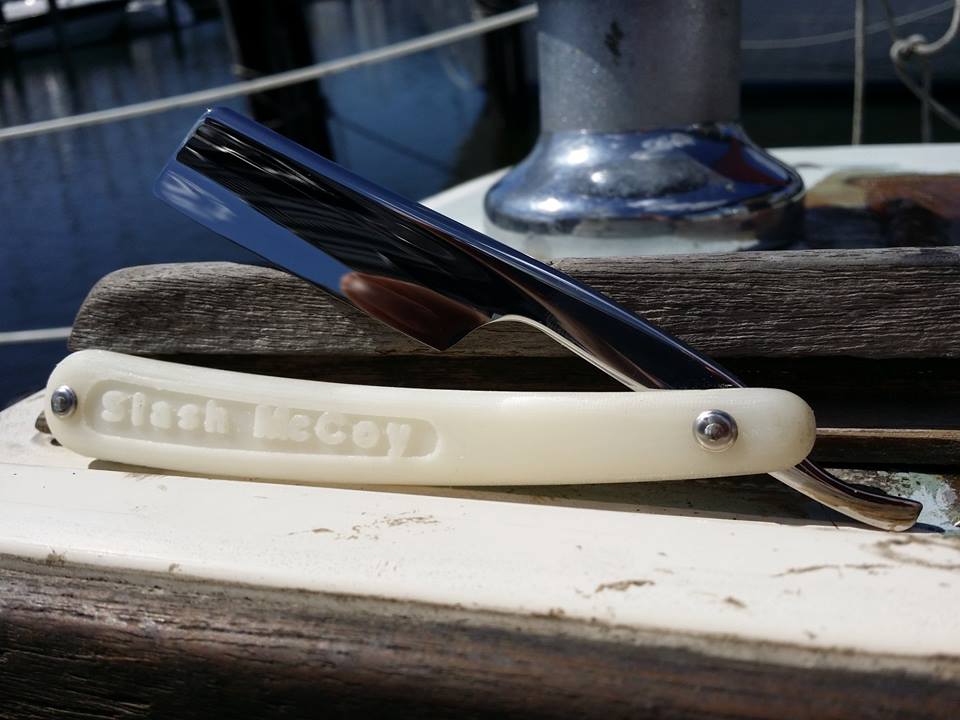 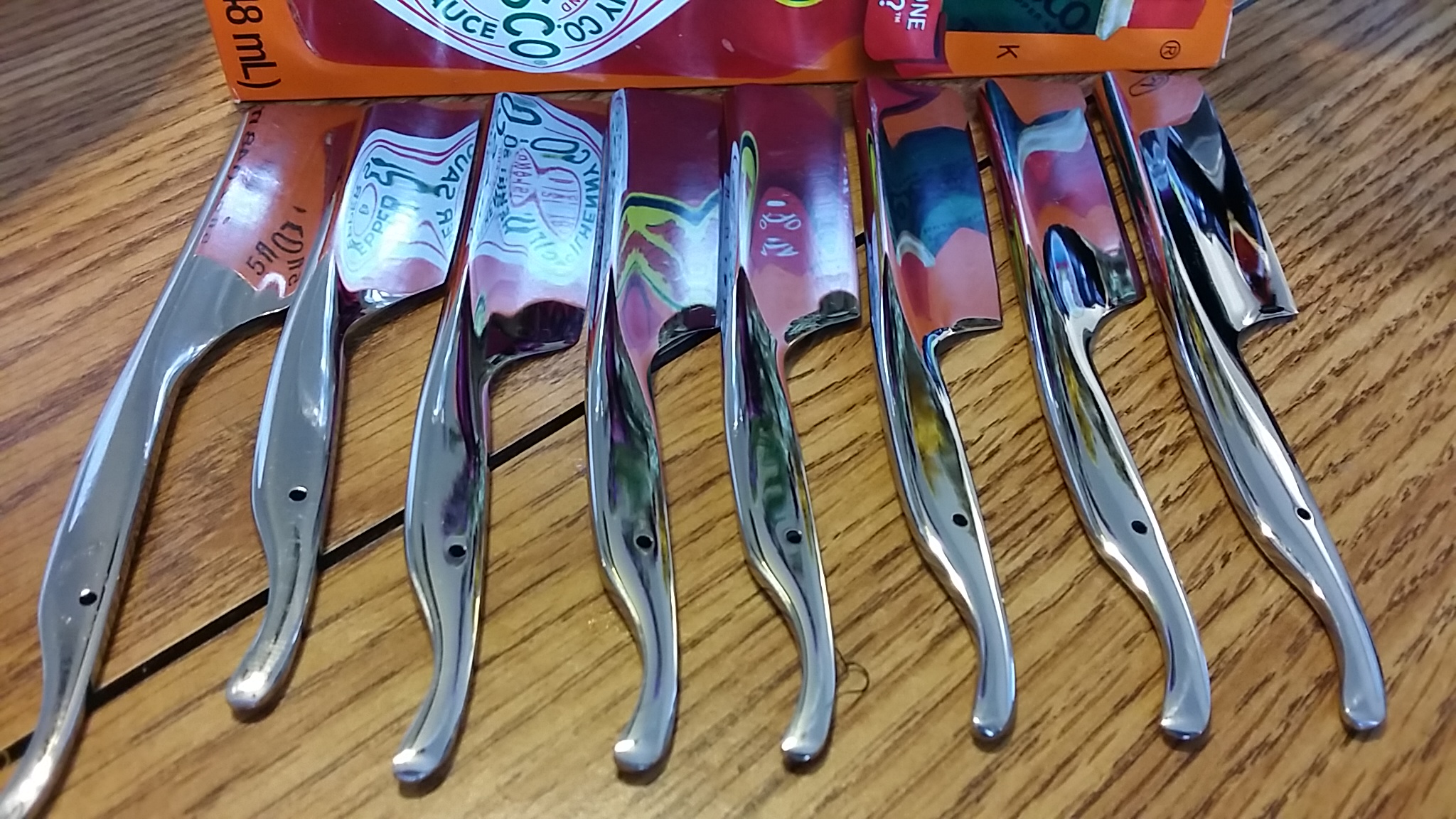 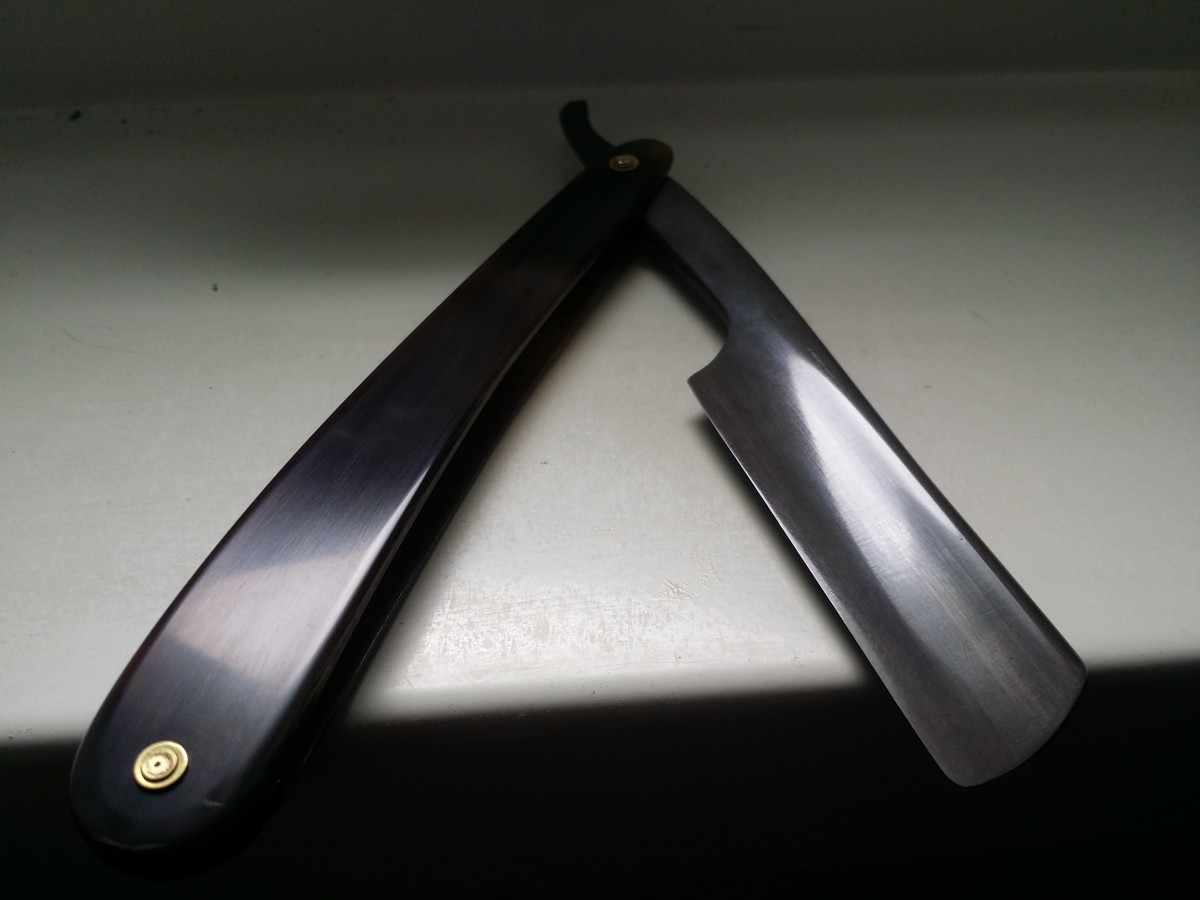 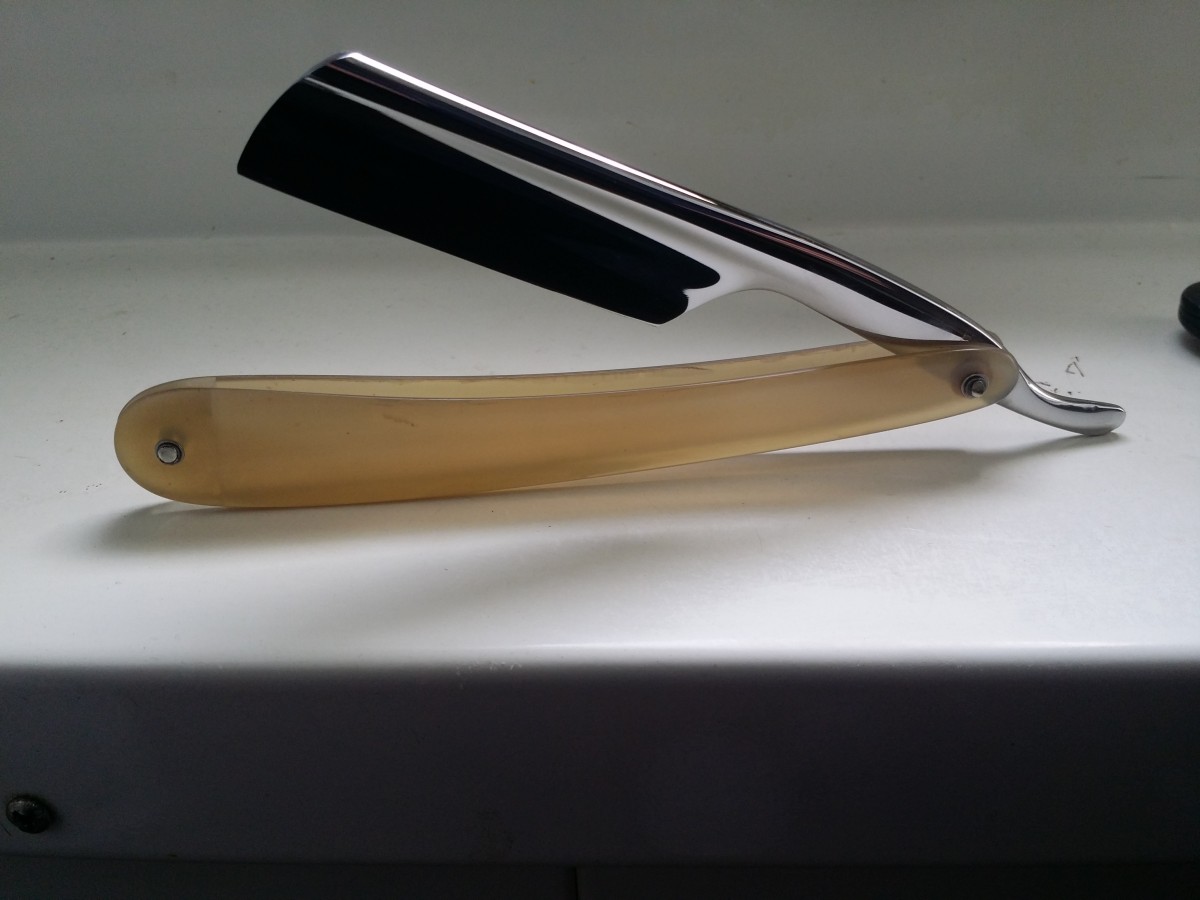 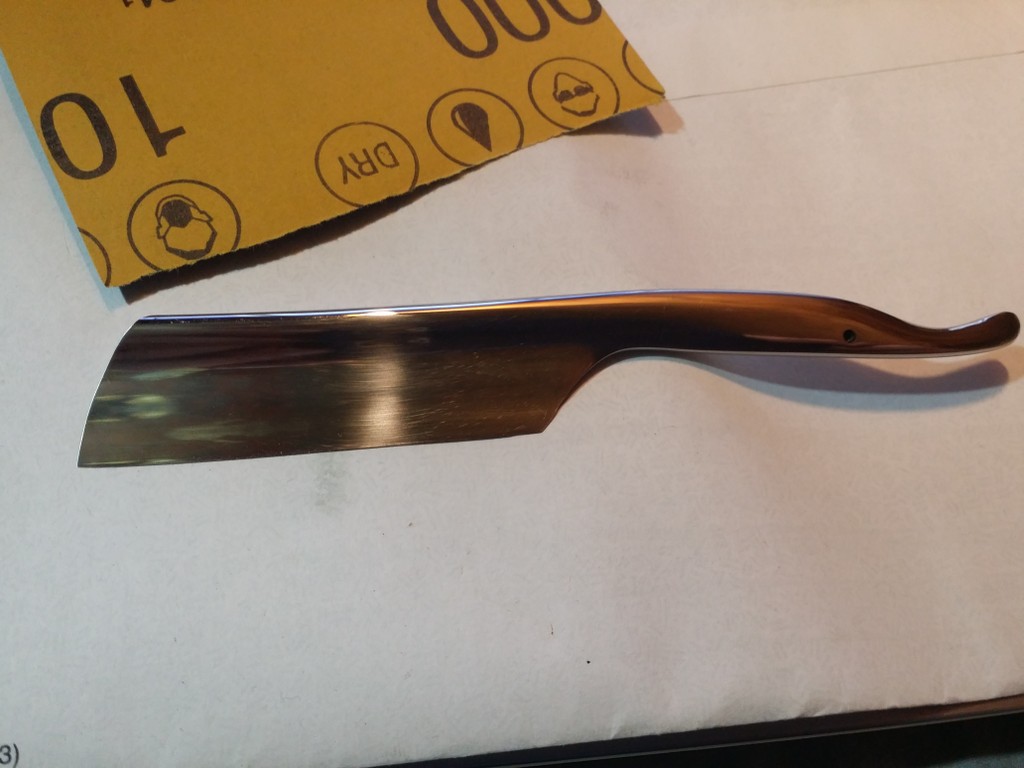 Glad to share @Slash McCoy.
I wasn't sure of the full details, having been awhile since reading of it. Not wanting to spread any misinformation, or gossip about it, I will link to the blog pertaining to it that is published by PRCo., assuming it will be okay according to rules here. I hope not to commit an infraction. I understand if it is not appropriate and needs to be pulled. I looked to see, and it is permissible by Portland Razor Co. to share it with others (per the p.s. at the bottom of the blog post).

Your razor work there is very nice, and you are an inspiration, among the many others here. Your comment on edge angle is not wasted on me. It broadens my modification plans. Thanks for sharing it with me here as a new member.

I know their stuff can be refined if desired and am not naturally prejudiced because it is from China, or Gold Dollar per say. I have a bent toward things from the region of my ancestors instead, and gravitate toward desiring other brands. I have improved the edge of my Gold Dollar, and look to re-shod it in the near future, and I almost bought another recently. My intent is not to create a campaign to dissuade others from buying GD. It's more about favoring local producers, and others who conduct business more appropriately and legitimately with honesty and integrity.

modded by the user/owner

I learned to shave and to hone with a 1996 but generally prefer a lighter blade with a more acute edge. I’ve kept a GD66 to play with different edges - 8k, 12k, cnat, etc as I prefer not lessening the edges on my other blades.

The Cutthroat said:
I don't think my gold dollars ever looked like that did u grind off the gold dollar logo

also where is the serration on the tang because my tang is serrated
Click to expand...

Yes I ground off a LOT of steel. The tang must be thinned or else it will be thicker than the spine, and the razor will never be truly shoulderless.
You mean the Jimps. Yes they are gone. Superfluous. Unneccessary potential incubators for rust. Also they do not fit in with my ideal of the most eye pleasing razor. Keep in mind that I very much believe that form follows function and the GOAL is not a beautiful razor, but rather, a wickedly efficient one. However there is no reason not to pretty it up as long as it is not at the expense of function. I prefer a sleek flowing liquid metal look and the crudely cut jimps of a stock GD are not that.
R

Gold Dollar razors have decent steel. It is generally the workmanship that is lacking. In general, the higher the number razor, the better the workmanship and the more expensive the razor. Those who want a piece of steel to fashion their own razor often purchase the GD66, which is inexpensive, but offers plenty of steel to modify. Those with skill like Slash McCoy can produce a wonderful razor.

The low numbered razors are carbon steel. I have GD208 and GD300 razors. The higher numbers are stainless steel. I have GD 400 and GD 800 razors. The workmanship on the SS razors is a little better than the carbon steel razors. However, once the heal is modified so the blade is flat on the hones, both the carbon and SS razors will take a nice edge. The steel is not very hard so they hone easily. However, the edge does not hold up as long as a harder blade. The harder blades, like Thiers Issard Carbonsong C135 steel, hold up well, but are harder to hone. It is a trade-off.
You must log in or register to reply here.