THall said:
Love my pre-war Tech with a Kai blade. Easy daily BBS for daily shaving. Getting a brass one had nothing to do with Zamac. I only decided on the pre-war because I had heard from a trusted source that they were more slightly more efficient than other years.

Zamac on a vintage Gillette is not the same type as you would find on a modern razor. Don’t fear the Z word on vintage Gillettes and other vintage razors more than 30 years old. I’ve seen plenty of vintage razors (Gillettes, Merkur etc) on auction that look like they’ve been missing plating for decades and even those haven’t corroded like my EJ did after just 4 years.

There are different grades of Zamac. These types span decades. Interesting reading online if you ever have the time.


Sent from my EML-L09 using Tapatalk

Oh, and the English Flat Bottom Tech (fat handle) is my favourite Tech

Sent from my EML-L09 using Tapatalk


Sent from my EML-L09 using Tapatalk
Click to expand...

Newer if you mean the 70s, I agree. One I have I am positive about the year due to NOS blades and razor is 1941 from the code on the blade. That is brass. The Zamac ones came out in the 60s I believe.

I’m with you, I’m in my mid 40s and it hard for me to call anything from the 70s vintage also.

The answer to the original question is yes.

They are indeed da bomb.

Yes they are bomb, different versions shave slightly different I have nearly every kind of tech, so many people say they are too mild but my beard is thick & fast growing & I love techs, sometimes it's nice to have mild comfortable shave, when I have 1 or 2 days growth I can't use a aggressive razor because my hair grows so close to the skin & with an aggressive razor It's painful to shave, this is where the tech comes in.

sharpstar90 said:
I think they're rather unimpressive. I would far rather shave with one than a cartridge razor, but I think just about any other vintage Gillette is better than a Tech. They're quite mild, and mild razors make me wanna press down. Mild razors are more "dangerous" for me, either due to pressing down or needing an excessive number of passes to get a smooth shave.
Click to expand...

My sentiments as well. A Tech is well-made, a good if one is running late, and just want a quick shave. But if a real BBS is the goal, the Tech is not the tool.

aldomarino said:
...But if a real BBS is the goal, the Tech is not the tool.
Click to expand...

I humbly disagree. It may take an ATG pass, but it is easily achieved once the shaver learns how to find the "sweet spot" on the Tech angle.

Bogeyman said:
I humbly disagree. It may take an ATG pass, but it is easily achieved once the shaver learns how to find the "sweet spot" on the Tech angle.
Click to expand...

It also depends on the blade. The 2nd closest shave I've ever gotten (based on how long it took for the BBS to deteriorate to DFS) was a late 1940s BET loaded with a Feather. It's not difficult to get to BBS with a Tech.

AshleyC said:
I've acquired three Techs over the last couple of weeks just looking around locally. One was $15, the other two about half that. I've shaved twice with these Techs, using a Persona blade. Mild, sure. You have to use the right angle, but I've not had a bleeding nick or irritated skin so far with one.

I think it is certainly a "three pass" razor though. Straight down, across the grain, then against the grain.

I considered going in for a Schick Injector, but I just didn't see any savings on blades there. About $7 per pack of 7 or so. It would be a novelty.
Click to expand...

So I know that this is a super late reply byr if you do get a schick you can order injector blades of 20 with the key from ted pella for $5.15 USD

Benzadmiral said:
I enjoy shaving with my Tech enormously. It's from the postwar period, fat-handled, in gold, and I find it a mild shaver and very effective when paired with the sharp Feather blade.
Click to expand...

Yes Admiral, that’s my experience too.
I have a Fat Handle Tech and am trying the Rapira Platinum Lux with good success.
The razor shaves well with different blades.

It's easy enough to use one or two shims under the blade with the pre-war Tech. This improves the rigidity factor and widens the effective shaving angle. It's worth trying if you haven't yet done so.

Make the shims by removing just the edge portion of older blades you are throwing away. You can use scissors for this. Don't use real good scissors, though, cutting thin steel is hard on scissors.

I've been looking at ball end techs on Ebay mostly the ones in red boxes. I'm sure you've seen them. Two questions:
1. Do they shave similar to my 1967 Super Speed?
2. Would you spend $50 for one never used that cost under $1 when new?

Contributor
I can't speak for anyone else, but for me:

1. Yes, both are smooth and pretty efficient.
2. No, there are too many BETs out there that look almost unused for way less than $50. The original cost is irrelevant, but I'm after the experience, not the trophy.

I poured over these forums for months. After my search there was only one razor that almost universally gets the nod. I came to the conclusion that I only need that 1 razor and a backup.

As a result I only use Gillette Techs. Timeless quality that can be had by nearly everyone at a very reasonable price. 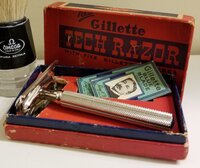 I’ve never got along with Techs, just too mild for me. I do however love the Star razor which is the same but with a bit more aggression.
O

I’m the same, I have a travel tech, an aluminium post-war tech and a fat handle tech and none of them shave well for me. Could be because I have thick hair. However the Gillette slim adjustable was my best discovery - I never need another razor! 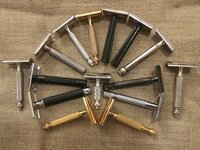 I get great shaves from all my Techs & Tech clones, using a wide variety of blades. My accumulation of Techs has grown since this phioto was taken.

ShaverAZ said:
View attachment 1077594
I get great shaves from all my Techs & Tech clones, using a wide variety of blades. My accumulation of Techs has grown since this phioto was taken.
Click to expand...

What are your top blades to all those Tech & Tech clones

HarryAU570 said:
What are your top blades to all those Tech & Tech clones
Click to expand...

Dear BBers,
I think I am a semi-fan of Pre-war Tech.
It always performs great with much smoothness.
I can always shave easy when using Tech.
Hybrid Tech seems to be a dream for many wet-shavers.
Is Hybrid Tech more efficient than Pre-war Tech?
In Tech clones, is there any razors which is more efficient than Pre-war (triangular slot) one?
Thanks for your inputs.
You must log in or register to reply here.
Share:
Facebook Twitter Reddit Pinterest Tumblr WhatsApp Email Link
Top Bottom