As some of you know, I’m not a fan of the Mach 3. My theory is that the placement of the pivot, at the base instead of the middle, makes for poorer shaves. I consistently get better shaves from my Sensor Excel than from my Mach 3. Still, my theory was just an assumption. I had conducted no tests to see if it were so.

The Sensor 3 disposable compares well with the Mach 3. Both have three blades, a skin stretcher at the bottom, and a lubrication strip at the top. The color of the Sensor 3 strip is orange, making me think of some cartridges made overseas. The handle also gave me that impression Sure enough, these were made in Brazil. The blades looked like the ones in the Sensor/Sensor Excel cartridge. The pivot is on the sides in the middle, just like the Sensor. Other than the pivot point, the Sensor 3 disposable is practically the same as the Mach 3. I think we can safely attribute any difference in performance to the difference in pivot point. Little to no difference means the location of the pivot point doesn’t matter..

My face prep was the same as a “quick shave” with the Mach 3: Wash my face with hot water; apply regular Barbasol shaving cream, then shave. I noticed a difference with the very first stroke. The Sensor 3 disposable gave me a much better shave than the Mach 3. This held true for the remainder of the shave. I had a closer shave compared to the Mach 3, with less irritation. I continued to use the same razor for six days, and each shave was better than the Mach 3.

This has to be due to the different pivot point. Placing the pivot at the middle of the sides automatically places all three blades perpendicular to the face and evenly distributes pressure. A base mount gives the cartridge a tendency to tilt like a gate hinge, with the bottom blade closer to the face than the top one, and uneven pressure between blades.

That base mount pivot point is why I think I don’t get as good a shave from the Mach 3 as from the Sensor Excel. That doesn’t mean you can’t shave with the thing, just that it doesn’t shave as well as it would with a center pivot point.

Surely Gillette knows this. Gillette had a better solution with the Sensor 3, and could have fiddled with the handles if they wanted to phase it out, just as they did when they moved from the Atra to the Sensor. Nor do I see how it could have made for lower manufacturing costs.

I wonder what a Fusion would be like with a center mount. But, given my results with the Sensor 3 disposable, there wouldn’t be a compelling reason to try more blades. Would not be surprised if that’s why they moved away from center pivots in the first place.

I have found exactly the same thing.
I had been using M3's after Gillette made Sensor twin carts unavailable.
A few years ago, they relaunched Sensor 3's , (the blue 3 version, made in Poland, or more recently, Vietnam ) as Vector 3's.
I find that the pivot point of the Sensor equalizes pressure over all blades, giving a closer, smoother, & more comfortable shave.

The first blade of the M3 tends to dig in, so I automatically reduce pressure to compensate. Remaining two blades dont seem to do a thing, unless I bend the handle of the M3 against the spring to try & bring more pressure on the remaining blades.

I much prefer Sensor systems to M3's.

Nice comparison, thank you for doing it. In my opinion a badly made pivot makes the razor worse, than it would be, if it had none at all. I myself prefer the Trac II over the Atra because of this. The Sensor Excel was the second razor i have ever used, after reading your comparison, i feel tempted to use on again, see how much i like it after all this time.

The Blue 3 and Sensor 3 disposables are both available in the UK. I haven't found any real difference between them and the Mach3. Mach3 is still my go to cart. Although the Quattro is getting a look in after being ignored for 15 years.

This is how these comparisons go... I prefer Mach 3 for the same reason—location of pivot point.

The image of the back of the Sensor 3 simple looks like the handle has tabs that prevent the cartridge from pivoting .
Its quite possible that if it can be put on a regular sensor handle, it will pivot. 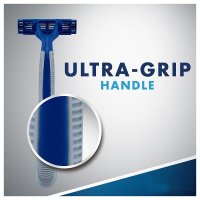 Sensor 3 is a much superior shave to the Mach 3 IMHO. The spring system in the Mach 3 dictates how much pressure you can put on the blades. That should be my decision not the razors. Sensor 3 simple has become impossible to find locally, but thanks anyway. Girl at the Dollar General says there wasn't much demand so they dropped it since it was the same price as the sensor 3 pivot.
I might try some Personna easy fit 3 on the Mach. Anyone know where the fulcrum point on that cart is? If it's middle I give them a try. I don't know why I bother the DE is great and the Trac is also when I'm in a time crunch

It’s not a Sensor3 but it’s low end cousin the Vector3 that I just shaved with here in Devon: 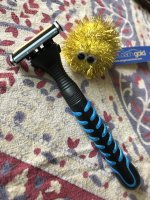 It may be cheap and relatively light but ergonomically the Vector3 handle is fantastic and the shave seems equally as good and maybe slightly closer than the Mach 3.
It’s a winner!
You must log in or register to reply here.
Share:
Facebook Twitter Reddit Pinterest Tumblr WhatsApp Email Link
Top Bottom