Okay, I know there are threads all over the place about this, and I did do some research first. Still, I'm not exactly sure about the year of this machine, so some clarification from any Gillette experts out there would be appreciated. 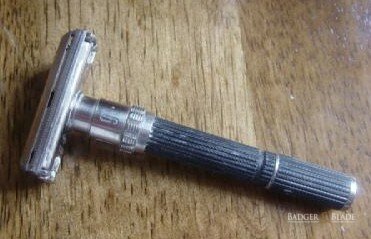 Now, the code on the bottom says R-2. Now it is possible that the "R" refers to 1971 as this model was in production at that time. But as far as I know, they made this razor right up to 1998 when DE production ended. Now the chart HERE indicates that 1993 was coded "N" and 1998 was coded "T" but there is no reference for the years in between, i.e. 1994-1997 inlcusive. Now, this razor looks pretty new, is it possible that it could look that good from 1971, or is possible that was made during the 1994-1997 period where an "R" code was re-used? If so, how can I tell the difference between these two models made more than 20 years apart?

Am I over analyzing? I just think this whole thing is pretty fascinating.

If you can help me out, I would truly appreciate it.

With The Grain said:
the "super adjustable" started in 69, by all accounts yours is a 71. what referrence do you have that says these were made up until and through most of the 90's?
Click to expand...

Hmm... good point. I originally was looking at the site with the link that I included in my original post, and that table seems to be pretty good about mentioning when production started and stopped for various models, and the Super Adjustable is never mentioned as ending, except when DE production ended in 1998. So I simply assumed that it was made until then. However, I have found another link to a site HERE where he states the Super Adjustable in production from "1968-1972?" so he clearly is uncertain as to whether or not that is the actual end date.

Now, he also mentioned that they made a "long handle" and a "short handle" of the super adjustable. Any truth to this and, if so, how to tell them apart unless you actually have one of both? I have seen "black & gold" models of the Super Adjustable, and also one with black portions on the bottom and of the blade holder, and (I think) black silo doors as well. He mentioned they also made a grey version, but I have not seen this one.

So, is there any such thing as a definitive guide to these models, including photos, specs, etc? Can they be identified any other way, i.e. by patent numbers, date codes, other secret codes, or combinations of these?

Is there actually a Gillette history book that tells a more complete story? You would think that would be a cool thing. Maybe I'll write to them and ask if they want one written, just for posterity - maybe samples will be included for the author

Again, any assistance in identifying the various models of Super Adjustable would be much appreciated.

With The Grain said:
the answer is yes to pretty much all your questions, there was a shorter handled, black handle adjustable, they're visibly different length wise when viewed side by side, seperated it might be tougher if you havent seen both before. it was my belief the super adjustable didnt make it out of the 70's but i could be wrong.
Click to expand...

In a really ironic twist, last night I recieved my second Gillette Super Adjustable because I won two e-bay auctions for what I thought were the same thing. However, one is a short handle and one is a long handle, and there is a huge difference.

And, from what I've found, they were only arounnd for a few years, so I have one R2 (1971) and one P2 (1972). The 1971 is the long handle and, I think, a much nicer razor, really nicely balanced even with the long handle. I think because the handles on these are so slim that the extra length gives it the weight it needs to counter-balance the head, especially with the extra weight of the adjust dial.

Still have to clean them both up, then I think I might trade off the short handle.

Thanks for your help.

....
You must log in or register to reply here.

1947 - a year of 3 strange and magnificent rhodium Gillettes

Gillette Super Adjustable shaves differently for each side