Gift from a Friends Parents

I have posted several times on this site about my best friend who died from Pancreatic Cancer a little over a year ago. He traveled extensively for his job and we got together when we could if he was in town but did not really communicate other than an occasional text. I would get pictures from places he went or dishes he ate the made him think of my wife and I. He was one of three on my friends that we went to school together K-12 and have remained friends and still all live within 5 miles of each other so at least once a year when Eric was in town we would get together and eat, drink and reminisce. When he became aware he had pancan he called me as my father passed away from pancan 10 years ago and he knew what a diagnosis meant. Because of his treatments and surgeries he was no longer traveling with his company and was either home or in the hospital so I made sue that I visited as often as I could. During one of these visits somehow the topic of razors came up and much to our surprise we learned each of us used DE, SE and Str8 razors with soap and brushes. This was not that unusual as we had always had similar interests in many things. The last 18 months of his life was a roller-coaster of surgery, sickness, chemo, radiation, and pain interspersed with periods in which he felt human and we always took advantage to gather with him and enjoy one another's company. About a year and a half ago he passed away (luckily just prior to COVID so we were able to have a nice crowded memorial service for him just as he had told us he wanted) and then COVID became part of our world and made getting together difficult but I made sure to check in on his parents to make sure they were ok. Then last week on got a text from his mom saying she thought Eric had mentioned one of us also collected shaving stuff and she thought it was me he mentioned. I told her it is me and she asked if I would like to have Eric's shaving collection. I said I would be honored but wanted to make no one else in the family wanted any of it. His dad kept Eric's favorite straight razor and they told me it would make them very happy if I would come get the rest. Last Saturday afternoon I went and spent the afternoon catching up with them and left with two totes of razors , brushes soaps aftershaves and I am not sure what else (lol). I started going through some of the stuff and will post pictures as I discover treasures....... It was so special to use one of my newly acquired razors today. I a now guaranteed to have good thoughts of my friend everyday when I look at my shave den. 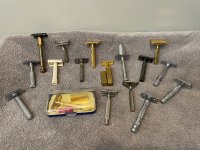 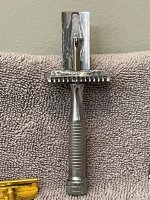 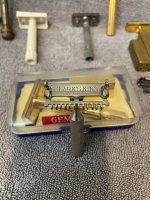 Contributor
Life-long friendships are beautiful and special. Those memories will be with you forever.

Some lovely razors and even nicer memories of your friend when you use them. That is a real treasure you have received.

Beautiful story of honoring your friend in life and his passing. Sorry for your loss. Thank you for sharing.

Contributor
These are the kind of stories that draw the sketch lines of our humanity. Loss is a difficult part of life, not so much for the departed but for those of us who remain. Wonderful story, and wonderful bunch of hardware to remember his friendship by. Thanks for posting your story and the colloection.

What a great story. You can honor your friend's memory every time you use one of his razors. I got three razors from my wife's cousin and think of him when I use them.

Also, pancreatic cancer is a horrible disease. My wife's best friend died a year ago from it, and now her sister has it as well.

I'm sure it is a bitter sweet gift. You will have the memories every time you use one.

Ambassador
It appears Eric was indeed one of us...

What a beautiful story. Thank you for sharing it.

Moderator
Contributor
No telling if he was a B&B member. I’d like to thank he was.

Thank you for sharing that part of your world. Your friend Eric was completely one of us, perhaps with better self control than many. We can really understand the pleasure he took in that wide and well chosen collection. It is wonderful that you can continue to reflect his character when you enjoy it.

I read the origin of Chief 'HA'. Just have to say, ha ha, most of us could not tell that tale so well. Thank you again.

Here is more of what I was gifted... 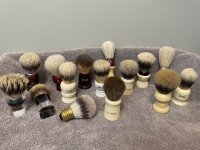 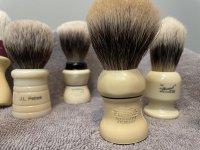 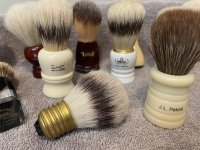 Love the bulb knot idea ! What a heartwarming story. Sorry for the loss of your friend and glad his equipment found a deserving home to remember him when using it.

WONDERFUL STORY!! Thanks for sharing.

You can remember your life-long friend every time you use that kit!!

Sorry to hear about your loss. As others have said, your friend was definitely a kindred spirit to many of us on this forum.
You must log in or register to reply here.

J
Another man in the hole

Today i was generous.