I have tough old whiskers. I like the following SE razors (chronological order):

santamariasteve said:
I have tough old whiskers. I like the following SE razors (chronological order):

Looks like down the road I will have purchase a Gem 1912 model, it is very popular. Thanks for the information every one.

Just won a bid on _bay for a GEM group of 3 razors, they seemed in good shape and hardly used.
I bought a push button gold gem and a feather weight along with a G-bar for about $13 US each with shipping.
The G-bar is a nice looking razor and a mild shaver that is perfect for my beard type.
Great information for generations that come along,Thanks folks from a GEM Greenhorn.

If tha G-Bar is in good shape, you’ll find it to be an excellent razor. It’s one of my favorites!

I only have two GEMS, so I picked G-Bar and Featherweight

. Of the two, I like the G-Bar best because of the weight. Comparing the two, I had a near instant affinity with the G-Bar. At the second stroke we felt like old friends. The Featherweight took me a weeks worth of shave to get it to stop biting at me. It's smooth, but it feels like I still need to be on my toes every shave.

I have used six GEM razors. I initially obtained a lot of 5 from the BST that consisted of a MMCP, GEM Jr, Contour 2, MM Bullet Tip, and Heavy Flat Top (aka G bar). This Gem Jr had a bakelite handle that twisted on and off. I sold all of these over the winter, as I didn't really find myself I repurchased a Gem Jr with a ln attached metal handle as I wanted to make certain I truly didn't like Gems, and the Jr was the one I liked best. I'm still not certain what I think about them. Using at the design angle doesn't seem to work as well for me, and a neutral angle is also not a good idea. I might need to try a fairly steep angle. The blades aren't quite as good for me as the AC razor blades, so I'm sure that's part of the issue. Most gents that use them have a very different experience from mine. My vote would be 1912 or Gem Jr but on mobile so can't see the poll. If you find that you don't enjoy the ones that you bought, give them some time and come back later. That has helped a few of my razors significantly. Happy shaving!

Accutec still exists as the corporate successor to ASR and still makes the Bump Fighter razor - as well as med prep razors and a full range of blades out of the same Virginia plant. Point taken however.


Spang said:
. For me, the 1912's combination of comfort and efficiency have perhaps been equaled but never really surpassed in the ensuing decades since its demise. The Gillette DE juggernaut eventually drove ASR out of business, .
Click to expand...

My favorite is the Ever-Ready 1914. Great razor.

I feel that I get superior shaves out of my Gems and Ever Ready razors than any DE. They’re smoother and closer shaves every time.

Jim99 said:
I feel that I get superior shaves out of my Gems and Ever Ready razors than any DE. They’re smoother and closer shaves every time.
Click to expand...

Interesting that a lot of folks mention that same comment and more than likely it's the very shallow angle for shaving and the superior blade design with the spine on the one end to give the blade more rigidity. Rigidity of a blade is important and there are a lot of folks who will explain and some interesting photo's that express their points of view.
The new modern GEM SE blade is .009 thousands thick, over twice the thickness of a standard DE blade(DE-.003-.004 thousands thickness).The GEM TTO Micro Matic models have sufficient clamping to make the razor excellent when handling. It could of been the demise of the GEM razor A.S.C Mfg when other MFG's Gillette, Schick also Personna went plastic and retailers found shavers flocking to cartridge and GEM did not follow? It's hard to find DE blades were I live and the big stores in the city are charging (15.00 Canadian for 10 blades or $12.00 US), they will eventually wipe out the DE blade product for good thanks to Marketing tatics.

My view is that back in the day, and still true today, most younger shavers wanted the latest and greatest technology. Not that it’s necessarily better, but because it’s new.

Gillette continued to roll out one new model after another, while there was little innovation at companies like Gem and Schick. If something already works well is simple to use and durable, must we change it for the sake of change?

My recollection is when Gillette came out with the Trac II, the advertising was all over the place and I couldn’t wait to try it. Like many other young people, I was hooked and gave up my electric razor for good. There was no other shave system we would consider and I certainly would not use something that I considered “old fashioned” and “inferior”.

It wasn’t until 4 years ago that I made the switch back. Those of us on this forum are the exceptions to the rule.

Anyway, lack of marketing, not churning out new razor models and perception by the consumer was the downfall of Gem.

Gems are excellent razors and have been overlooked for years. It’s good to see them gaining in popularity even if it’s from wet shaving fanatics like us. They truly are that good!

You know how Gem blades could improve and get a better foot hold if it came out with a new blade that will still go in the old razor models but has a round hole in the center so better design of clamping can be used and remove the spine and make a second edge(Just thinking loud). Blackland Sabre razor with it's rectangle stud top cap threaded center clamping bolt is good but a totally round one is better for strength for new razor designs in the future. I do not think its a big deal for Personna to change a small rectangle centre shape to a round one but they have to keep prices the same and come out with a superior or a good clamping razor design than others with single edge. GEM blade generation 2 new improved with maybe a few different coatings and they would have some success possibly.
Feather AC made a significant foothold in razor SE blades by doing exactly that with Schick injector blades by making them longer and maybe better clamping for their new line of Straight razor design for barber shops world wide. Schick injector is perfect for width and has been challenged by a rival thinking outside the box and has made a descent blade, Schick has their blade line and also the new Schick Proline b-20 & p30 which is just as good or better than AC IMO from feed back reading from happy customers. Gem had great engineering and patents for great future designs but management maybe never followed through(out costs for tooling up) and shelved the future of once a great company.

Gem was thinking into the future and I came across this rare photo of one of their proto types that must of got thumbs down for not working. It was a adjustable by lifting the blade up from the other photo's I looked at.

Ron R said:
Gem was thinking into the future and I came across this rare photo of one of their proto types that must of got thumbs down for not working. It was a adjustable by lifting the blade up from the other photo's I looked at.
View attachment 926988
Click to expand...

That one was up on eBay a few years back. I bid on it, but lost out in the end. I really didn’t know the history and authenticity of the razor at that time.

The seller used to be active on several shave forums and informed me it was, in fact, a prototype. That was after I lost out on it. He said he used it a few times and that it was a good razor. I believe Gem made a number of these adjustable prototypes and gave them to the executives and workers to try out. Whatever the reason, it never got past the prototype stage.

Jealous of the OC Dammy!

Jim99 said:
I get my best shaves from my Gem Damaskeene open comb.
Click to expand...

shave/brush said:
My favorite is the Ever-Ready 1914. Great razor.
Click to expand...

I love the shave that my ER1914 gives and she can really sing .
My second Favorite is a 1912 Gem DeLuxe Open Comb . 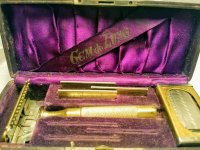 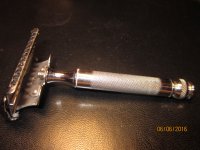 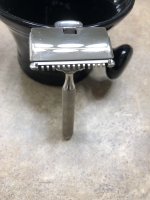 polishaver said:
Jealous of the OC Dammy!
Click to expand...

It’s even better than it looks. Mmmmmmm....

Doing some research into Gems and came across this information from another form that would maybe interest some ASR Gem owners.

If you are more into reading than looking at a chart, here goes;

Something new I learned was the 2 bumps that are on most but not all Micromatic razors were for the double edge blade that was introduced. They were added to take some of the aggression off the blade because the spine was removed(Micomatic double edge blade)they were going to challenge Gillette double edge it seems to me with their double edge blade. ASR GEM probably found blade sales dropped off when introduced is my guess because you needed less of them over the year in a limited market?. 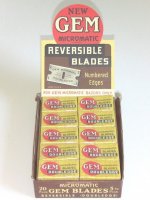 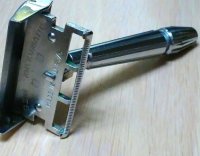