Billy T. said:
How about a part 3? I am ready to take our relationship to the next level
Click to expand...

Why thank you, kind sir! I'm not sure we need a Part 3. What started this was I misunderstood poor @ylekot in another thread and kind of snapped at him at first. Then I realized he was really trying to do this lather thing and just not getting it. That a) made me feel bad, and b) made me realilze that a lot of experienced shavers here who have used tons of wildly different product were likely confusing the heck out of newer, aspiring lather maestros. Not that we are not well-intentioned, we just get to into this and toss so many techniques around we can overwhelm newer latherers.

So, seeing as how the whole process is about getting to the right hydration level for any given product I just wanted to give newer latherers a track to run on that would be foolproof. Get enough product, and start far enough below the proper hydration level and creep up to it, there is no product anyone cannot master. My experience with B&M was a tough case, and took longer than usual to figure out, but it still worked. I believe between parts 1 and 2, I accomplished the mission I set for myself.

However, @Billy T. let me encourage you to pick a soap and go for it! This exercise was certainly fun for me! Why don't you give it a shot? I bet you'll have a lot of fun, too! And thank you again.

P.S. In fact, I can't think of what I'd put in part 3. From these two threads all there is to do is get super familiar with a product. B&M took me maybe a dozen shaves, Sterlings took me about 3, but if you like a product, you should be lathering it like a bauss as you get familiar with it. It's familiarity and practice, I have no more tricks in my clue bag.

JCinPA said:
Um. Cool! What was your conclusion?
Click to expand...

Sorry about that! Exhaustive scientific is my thing, make it real world is lacking. Let's see...

Probably #1 is it's water tolerance, as that is an advertised feature and it lives up to it. Yes, wide hydration window. As mentioned the lather makes it obvious when it's in the range, so keep pushing. Budget friendly for new shavers as it takes very little soap on the brush. Slickness feels promising considering the excellent residual slickness and amount of water it takes. I am definitely going to shave with it, but I took it too far for testing!

One other tangential was my idea to use the Wee Scot for testing. Even without careful measurements and a scale, The Wee makes an excellent brush for test lather. For one, obviously, less soap waisted. Two, it forces careful technique. Simpsons does not condone swirling the brush and I don't doubt it could be damaged with excess pressure!

Contributor
Ambassador
Outstanding! Thank you for this.

This is why I love being a part of this forum, conversations like these.

This is also why I think we confuse new shavers because they have to be asking themselves, "WHAT are these two lunatics talking about?!"

But I agree. Carry on, and please report your findings, sir! lol

For the noobs, don't worry about this, just follow the process I laid out. Two old heads here playing with a finicky lather here, nothing to see, move along, move along! lol

@APBinNCA what I want to know is when you hit the sweet spot, is this a great soap, or what? I think too many give up on it too early because it is so different. I admit I was getting impatient with it. But when I got it to where it needed to be ... angels sang

Wiki Team
I lathered Barrister and Mann Spice soap today using the @JCinPA method. What a fabulous shave! Even with a generic dollar store blade it was great with only one small weeper on the chin. Followed up with B&M Spice Splash and it's the best shave I have EVER had! The process works!!!

Contributor
Ambassador
Nice job @ylekot ! It took me about a week to get it to where I started to like it, another 3-4 days to really dial it in. It’s not an easy soap to learn, IMO, but this process does help! As you get more familiar with B&M I think you’ll come to love it. How did you like the Spice? I understand it is an homage to Old Spice, but not a clone. Your thoughts?

JCinPA said:
Nice job @ylekot ! It took me about a week to get it to where I started to like it, another 3-4 days to really dial it in. It’s not an easy soap to learn, IMO, but this process does help! As you get more familiar with B&M I think you’ll come to love it. How did you like the Spice? I understand it is an homage to Old Spice, but not a clone. Your thoughts?
Click to expand...

I absolutely love it, and my wife does as well. I ordered samples of the soap and aftershave from Maggard's. Now I need to buy the full sized stuff. I got a better lather from the Spice than I do with Arko. It is slick and works great. The scent is reminiscent of Old Spice but more.....distinguished?.....Deeper?.....I can't find the word I want but it is to my and my wife's nose an excellent scent. Superior to current OS offerings and I can't comment on the old Shulton stuff..... my olfactory memory is not that good. But this stuff is GREAT!

JCinPA said:
But I agree. Carry on, and please report your findings, sir! lol
Click to expand...

Alright, first I want to apologize for hijacking your thread. I should have made a separate post. Now that it's done, let me explain the reasoning behind my first post testing to the breaking point. Then I will get into the shave.

The reasoning behind the ratios was actually to come up with something with real world usability. 1.1g of soap times 50 is 2oz of water. What I had in my head all along was to figure out an amount of water that could be roughly measured into a cup and use for building the lather. This way, both experienced and new shavers could dial in up to this amount without breaking the lather. As I will get into next, my recommendation is one ounce of water and a well squeezed brush. 1.1g is simply a fully loaded brush. Drizzle and build.

This is where I admit things didn't go according to plan. First, this soap does NOT work with low ph water. I would actually use tap water. Consider this a warning for others that think they want to used distilled, don't. Second, possibly as a consequence of the above, my ratios went out the window. There was no way that I was getting 2oz of water into this lather.

To test the shave, I brought out The Bullet Tip. It is polished and known for it's suction thereby putting the slickness to the test! The soap is as slick as I had hoped because it did't allow the razor to skip while stuck to my face. That is a pass for the most important test. The residual slickness is there, but not as well as I had hoped. I can make strokes without re lathering, but re wetting an area does not produce the slickness I expected. The stability is definitely very good as it isn't drying in to a chalky mess before I can shave that area. That is a real problem with this vacuum effect razor. Post shave is fine, I would say neutral.

Did angels sing? Unfortunately, no. My previous lather that I ruined was better, I will have to go back to tap water. Was it a good shave? Yes! This was worth my time, but I have new DG soaps coming next week...

Check out B&M's website, I believe they have a points program. Also, try out the bath soap. He is in the process of switching his non Reserve soaps to a new base so if you decide to try something different later, you will have the latest base to choose a scent from.

Contributor
Ambassador
You didn’t hijack anything! This is about the process and folks’ experience with it. I will say I think you’re working too hard. @ylekot and I are loving it. And he nailed it quicker than I did!

JCinPA said:
And he nailed it quicker than I did!

Probably only because I had no idea what I was doing and had no preconceived notions about how it would go! Just followed the process and it worked and worked well.

Wiki Team
Here is today's Barrister's Reserve Spice. @JCinPA 's process works folks! I tried to swirl it all fancy but I am not that coordinated.

Contributor
Ambassador
No, that's because it is a "low-structure" lather. It just won't pile up like, say, Tabac could, it's a function of the soap recipe. But I bet that shaved nicely!

JCinPA said:
No, that's because it is a "low-structure" lather. It just won't pile up like, say, Tabac could, it's a function of the soap recipe. But I bet that shaved nicely!
Click to expand...

It shaved wonderfully! It is very slick but rinses off clean. It is working very well for me.

using similar procedure, getting great lather today from MdC sample-on-parchment paper!
the blank areas are previously-used shaves; unused shaves are in bottom right corner, probably enough for 2 or 3 uses!
shown on brush and bowl is the lather that was left-over after two-pass shave! 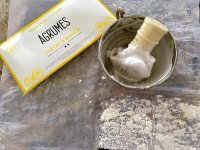 Contributor
Thanks for all those contributions and especially to John. I love lathering. I find it a time when I am at my most reflective. There have been a coupe of soap that I could not get on with over the years. The answer for me is just don’t use those soaps. There are many great soaps at all different points out there. We are spoiled for choice now days.

It is great hearing people’s experiences. Happy Shaves to all.

Contributor
Ambassador
I thought I would post this young man's video (no idea who he is, was looking for a video on the Fat) simply because I think it's brilliant. Exemplifies the process perfectly. Lot's of product. Start fairly dry (the brush, blooming the soap is OK), add water s.l.o.w.l.y, and take your time, don't be hasty.

Thanks for taking the time to do this
You must log in or register to reply here.

The Fat! And about damned time, too! Thanks to Edinburgh!
2

How do you use your dual comb razor?