I am starting my first project with a nice dubl duck, but it has nicks at the toe. See photo below. I need to remove about 1 to 1.5 mm before I can set the bevel. I think that would take forever with a 1k. I also have an 800 and a 220 . I'm thinking I need the 220 to remove that much material. That's what my experience with knives tells me - unless razors are so thin that I can do it with a 1k. Any advice would be appreciated.

I’d attempt a high toe roll on the 800 instead of trying to remove all that metal all along the edge for now. And then let it gradually catch up.

It's worth a shot. I did not think an 800 would be abrasive enough. Also, I don't mind removing along the entire edge, as I need to practice (learn) the "X" stroke. Either way, I'll start with the 800, thanks.

Contributor
1k could get those out without too much trouble. Hollow razors grind a lot faster than most knives. Coarser stones of course would do it faster. Just be careful.

For visible nicks, I often use a broken-in, fine polka-dotted DMT, sticking with up-and-down strokes to minimize micro-chipping, taping the spine before removing it for the rest of the honing sequence.
Last edited: Saturday at 7:48 PM

As for the question of rolling up on the toe, I applaud your initial thought to keep the edge straight. It is sometimes hard to find a razor without an upturned toe even when the edge was originally straight all the way out to a square point. Once you round it up, it takes an AWFUL long time for it to stop being round. Rounding the toe is something you can do in 10 minutes but something you can't undo through normal use and honing in 10 years.

However, there are very good arguments for rounding up the toe in this case. Because the damage is confined to the last tiny bit of the edge, it can be done in such a way that only a very small amount of toe would need to be savagely mutilated, and TBH the very tippy toe doesn't really have to shave, and in fact some users prefer or are better off with a very muted toe or a rounded one. Your choice and not to be blamed either way. And rounding up the toe, instead of honing it straight until the damage is fixed, would save you from losing a lot of blade width. There's that, too. Pretty convincing reasons, I'd say.

I really like straight edges and nice square toes and heels. But for me, the temptation to just round up the toe would be pretty strong for this particular razor. Then again, have you shaved with the razor? Here's another thing. Believe it or not, not every nick or chip will traumatize your face if uncorrected. So, what I would start out with is just honing the razor as if the chips were not there, pull up your big boy drawers, and have a shave. See if it matters even one little bit. You may not have to make any decision at all, though if you intend to sell it then you will want to do one or the other and sad to say the most efficient way to make it sale ready and squeeze every nickel out of it would be to carefully round up the toe. Don't use a full rolling x stroke. You don't want to turn a straight edge into a smiley any more than you would want to turn a big smile into a straightedge.

Oh okay yeah the 600 paper would be okay to start, but hone a bit kitchen knife on it first to knock down the prouder abrasive particles before you put razor to it. A fresh piece of sandpaper can be chippy. If you started with say 1k sandpaper it would not be such an issue. Generally, figure where a certain grit stone would be used, jump up a grit higher if you use sandpaper, and put about 50 laps on it with a big stainless chef knife or similar.

I never drop below 1k, in fact it’s my coarsest stone.

Thanks to all. I'm making progress and I owe it to the helpers on this forum. Slash, I appreciate your insights. Last night was my very first honing attempt and it went well. The session reminded me of an origami session I had with my very young nieces a while back. We were doing a very complicated fold that required five individual folded components. What amazed me was not how well they folded; but when my niece said, "This is very calming". That's how I felt about honing last night. It was very calming, maybe even meditative - if that is a word. I hardly realized it was 1 AM and time to quit. I made lots of mistakes; like picking up the spine instead of rotating on the spine. But eventually I was able to follow the water/slurry and keep it evenly above the edge. I used the "X" stroke. I went from the paper to an 800 King stone and the two nicks are gone. But the chip at the very tip is a beast. There is very little of it left now and I should complete it today. I have kept the line and there is no smile. But whoever had it last must have tried to take out the nicks. The spine is just a bit worn at the toe, making for a slightly steeper bevel there, but just VERY slightly. This must have been a 6/8 blade, but now it will be an 11/16 so I have not lost too much steel. And I want to keep a square toe for outlining my beard.

So what happened is this - I stumbled slightly and fell into this very deep rabbit hole - deeper and deeper and faster and faster. I had already ordered balsa and paste for the method but that won't end the steep slide. Keith J had a jnat starter set for sale but it sold. Guess I'll wait for him to put up another.

One thing that someone who’s just coming into this can focus on is just keeping the razor going once it’s shaving well. It sounds simple and easy but even this takes some dedication.

lightfoot said:
One thing that someone who’s just coming into this can focus on is just keeping the razor going once it’s shaving well. It sounds simple and easy but even this takes some dedication.
Click to expand...

Here is a progress photo. 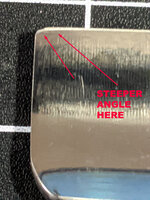 Well, I finally got the chipped toe on the Dubl Duck repaired. I managed to keep a square shape. I've put that one away for honing as I am waiting for two of my Naniwa stones to come in. In the meantime, I have one more chipped blade to repair. It is a very nice W&B bow razor with clean scales. But it has two nicks, just like the Dubl Duck. See photo. And who are these people that are nicking these nice razors?