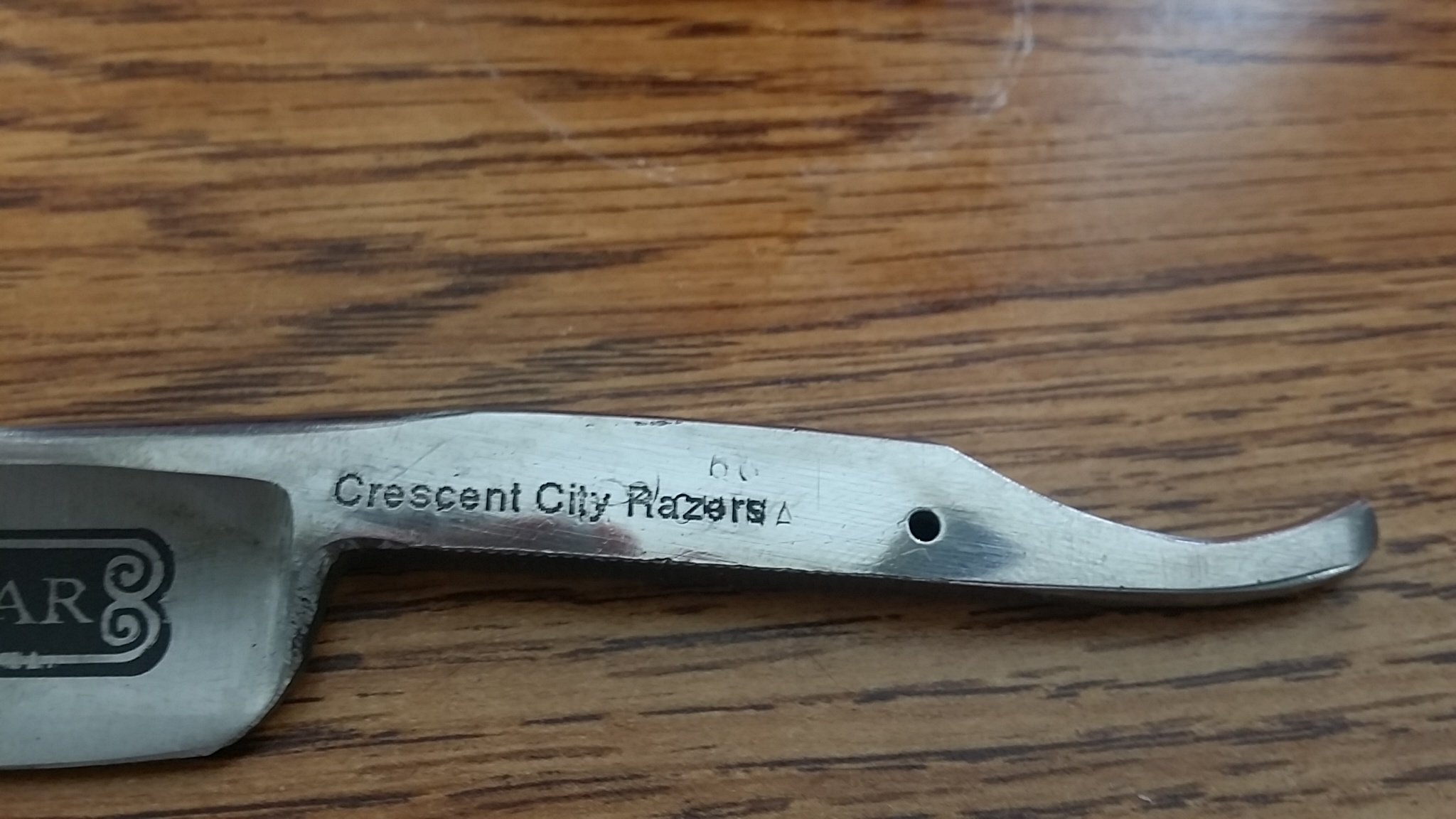 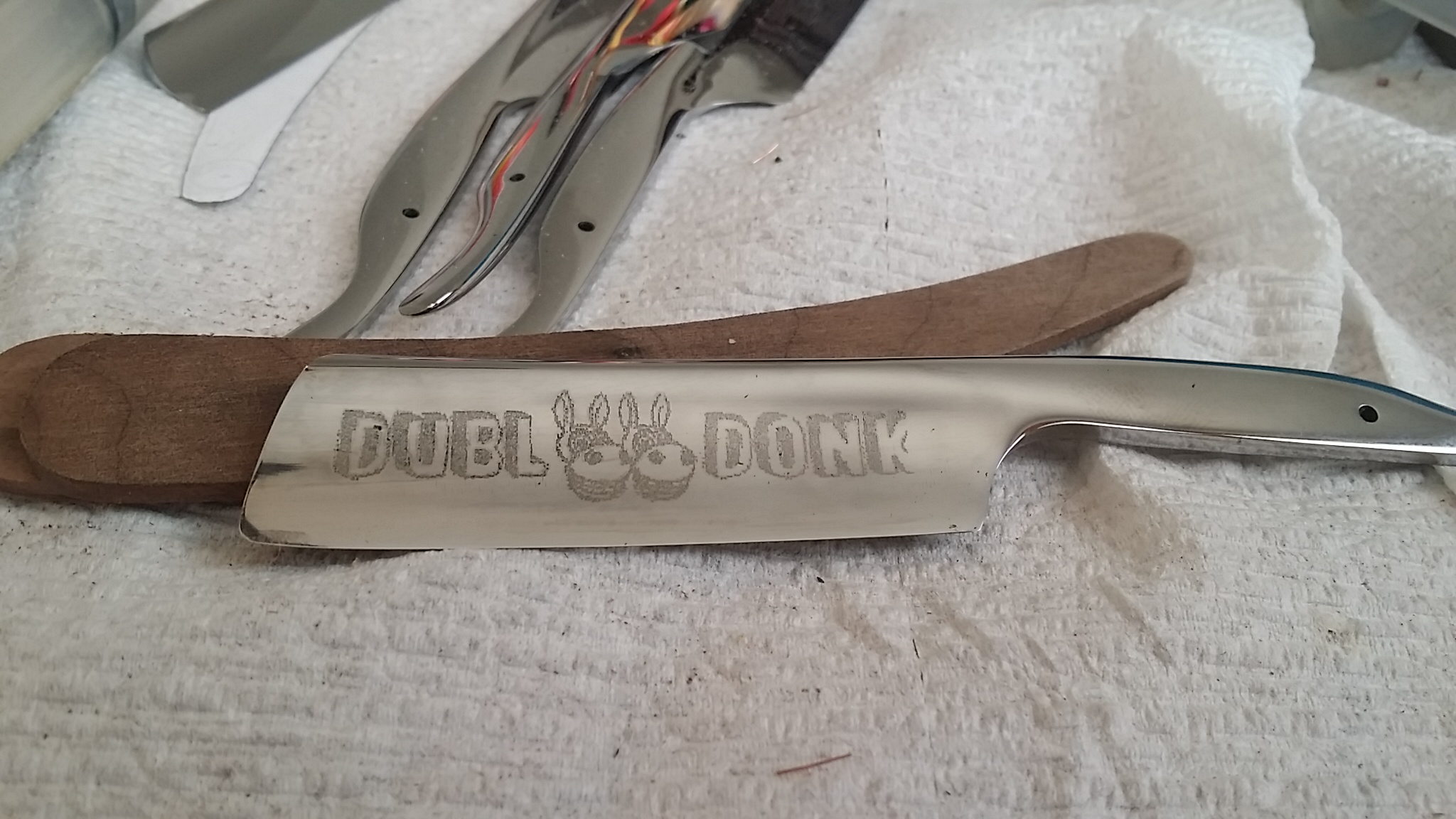 Fooling around with electro-etching. Trickier than I thought it would be. I trashed several knives and razors until I got these two marks to come out okayish. Yes, bottom one is also GD66, or at least it was when I bought it.

Procedure is pretty simple. I had a 1kw Variac and a welding rectifier and other odds and ends on hand already, so all I bought was a 100W 100ohm rheostat in case I needed to tame the current a bit. For those with no background in electrical stuff and with old google-fu, a Variac is a type of variable autotransformer. Actually a brand name for an autotransformer but has fallen into common generic use sort of like kleenex or crescent wrench. An autotransformer is not anything automatic... it is a transformer with only one winding. It is both primary and secondary, with the secondary being on a movable tap, so your output is variable between 0VAC and about 130VAC. A Rectifier or in this case a full wave bridge rectifier is just four diodes arranged such that AC goes in, ripply DC comes out. The Positive DC is used as ground. It is clamped to the workpiece. A stencil is made or else a design is scratched in an etch resist applied to the blade, and the negative lead is attached to a probe which for me was a piece of 3/4" copper pipe, wrapped in paper towel which is then dampened with a saturated table salt solution. Best results so far are direct connection without the resistor, Variac set at about 13VAC. That was giving me about 1A current.

The tricky part is knowing when the etch is done. If you go too long, you make a lot of pitting under the blank parts of the stencil or etch resist. Not long enough, and the etch is not deep enough. AC can be used after DC, to blacken the etch, if desired. I didn't mess with that today.

Stencil was made on a Brother PT-D600 Label Maker and .7" wide stencil tape, which is different from regular label tape. It has no adhesive and must be mounted on the work piece with glue or electrical tape. Fingernail polish can be used as an etch resist, for those with artistic inclinations. Possibly sharpie marker, too, I don't know. The Brother label maker would not play nice with my Ubuntu computer. I had to borrow a WinDOHs computer and install the drivers and the editing program to create the stencil with the image in it, and upload it to the D600. The tang mark stencil was made right on the label maker itself. I just had to adjust font size.

The Brother stencils do not last. So far I have not had one survive one use in good enough shape to use again. Still playing with settings and etch times, but they will not last like the professionally made ones.

This is also a good way to mark your pocketknife, multitool, or other implements and hand tools. Anything steel, actually.

Anybody who has been messing around with acid or ferric chloride etching and like me can't afford laser etching should consider this method. There are kits, by the way. And really, any variable DC power supply (and variable AC, for blackening) that will cheerfully deliver a couple of amps is good enough. Some guys use 12v battery chargers. At 12VDC to 14VDC no current control is needed. The resistance of the soaked paper towel, gauze, or cloth is enough. An ammeter in the circuit is a darn good idea, though.

As with all things electrical, please be careful.

Interesting Slash.....could you use something out of a printer to make the label or stencil?

6Cuda6 said:
Interesting Slash.....could you use something out of a printer to make the label or stencil?
Click to expand...

Im sure there is a way to use a laser printer for that, just a question of getting the right stuff to feed it. There are also photo resist methods of making a stencil and I suppose a laser could be used to cut a stencil. There are guys who make stencils for the knifemaking crowd, too.

FWIW, the label printer is laser.

Slash McCoy said:
Im sure there is a way to use a laser printer for that, just a question of getting the right stuff to feed it. There are also photo resist methods of making a stencil and I suppose a laser could be used to cut a stencil. There are guys who make stencils for the knifemaking crowd, too.

FWIW, the label printer is laser.
Click to expand...

Maybe print on a normal laser printer if available, that brings you a higher resolution (more DPI = finer details). And use this technique to transfer.

Schwabenchris said:
Maybe print on a normal laser printer if available, that brings you a higher resolution (more DPI = finer details). And use this technique to transfer.

Nice. What type of alcohol, ethyl, methyl, ? And have you used this method? It looks pretty simple and effective.

Some people also, depending on the paper (the shinier the better) just pour acetone to the back of the paper.

I have not used it yet, my power supplies are at my parents (1000+ km, three borders) Hopefully after Christmas.

Some people also, depending on the paper (the shinier the better) just pour acetone to the back of the paper.

I have not used it yet, my power supplies are at my parents (1000+ km, three borders) Hopefully after Christmas.
Click to expand...

You can probably use a charged 12v deep cycle or even a car starting battery. Or just a battery charger. Current will vary with the resistance of the circuit through the pad, but with a 12V battery of reasonable size it should be in the ballpark of .4A to 2A, and 1A seems to be about right. You might be able to adjust the current by adjusting the strength of the salt water electrolyte. Try on a junk razor or a polished piece of steel first. I went through a few razors before I got a good etch. I think the stencil not being sealed to the steel was contributing to my initial failures and maybe a transfer will work better for me.

Pretty cool, thanks for sharing.

i saw a video a while back from the dovo factory - i think they painted on a resist and used a laser to burn through it before chemically etching. i am currently tinkering with a similar approach for marking various things. experimenting with different resists. spray lacquer worked well once but totally failed a second try. various tapes have left residue behind that inhibited the etch. there are purpose made products but i have been trying to find something that i have on hand, so far with mixed results. will probably try one of the gold dollars i have lying in a box once i get the process worked out. it should also work for electro-etching and i will be trying that also.


I have some old gold dollars

i was digging out the old GD66's and ran across an old electro-etch attempt from several years ago. used the silk screened logo that comes on the razor and some nail polish or testors model paint (dont remember which) to mask around it. ignore the signs of neglect, this one was never going to be a show stopper anyway.

The stencil is critical for sharp edges. They are pretty cheap to have the good ones made professionally.
You must log in or register to reply here.

Gillette SuperSpeed 1948-9. First Shave And Impressions By A 'Newbie'
2