Thanks for the input. I have not shot a group from the bench with this gun in a long time. The slow fire target of this morning for score, although not having a tight group like the practice targets previously mentioned, it had 8 of the 10 shots that were evenly horizontally dispersed across or even with the 10 ring. While not entirely diagnostic, it suggest to me that the elevation is on.

I'm going to the range tomorrow to shoot a match. Perhaps afterwards I can bench my .22 pistol(s). Interesting point about natural POI/POA differing from benched POI. I'll have to play with that a bit.
Last edited: May 3, 2022 Wow! not exactly what I expected! Benched my Ruger Mk III 22/45 and fired with and without the suppressor. Major shift of POI! First round flier with the suppressor which I did expect. 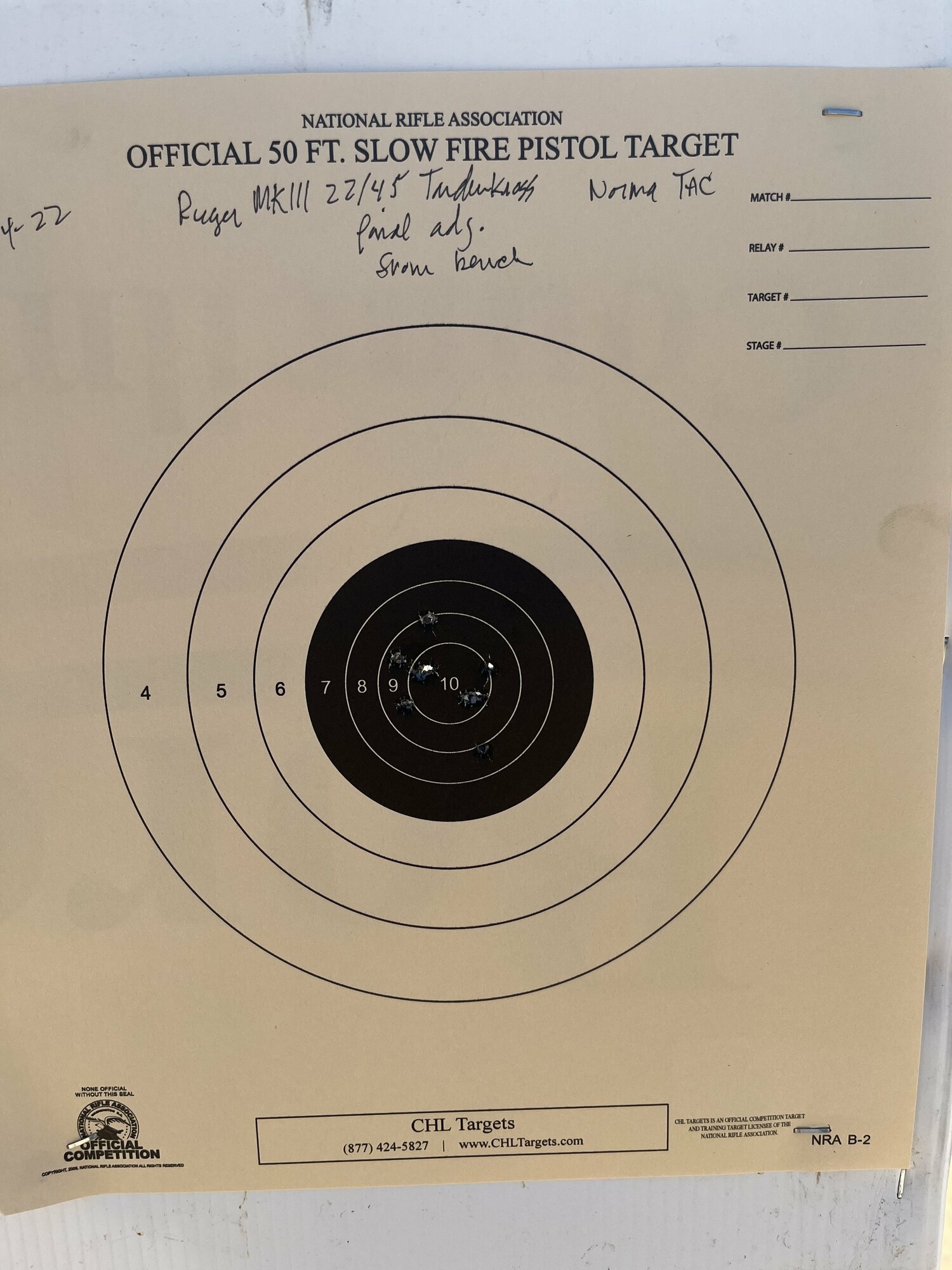 Adjusted the Burris FastFire III, shot from the bench.

Did my bullseye league tonight. It was not a good night. 220 - 2X Half my shots were tightly clustered in the center. The other half were broadly scattered. All the shots hit the paper. Two shots didn't score points. I'm going to post Tuesday's practice round this week.

I am going to get the red dot after work. I will sight it in tonight and then shoot for score tomorrow. At least that is the plan.

Well, while all that shooting from the bench with and without the suppressor was informative, I decided to adjust my FastFire back to zero with the suppressor on, as that is what I'll probably shoot the most with the MkIII. My readjustments were done while shooting off hand, so some further tweaking may be called for, but I did pretty good afterwards and shot for score for this week. Best score yet.

Here are the scores I have for the 7th session. I'll add Scott's to the mix when they are posted. I used my "practice" session's score this week. I tanked my league night big time. Handicaps are based on the top four scores as is the standard deviation.

I may have to shoot twice this coming weekend. I should get my mount today and then I am sure I will suck with it but oh well.

BigFoot said:
I may have to shoot twice this coming weekend. I should get my mount today and then I am sure I will suck with it but oh well.

Hey Scott... Change is good for us. It helps keep those brain cells sharp. Focus on the dot or focus on the bullseye. With a red dot either works well. Just don't try to focus back and forth.

I'll be changing out my RDS when the mount gets in as well. I'll also be changing the trigger and have already changed the grips on my MkIII 22/45.

nortac said:
I'll be changing out my RDS when the mount gets in as well. I'll also be changing the trigger and have already changed the grips on my MkIII 22/45.
Click to expand...

This league has created animals. I was going to look into a trigger job as well.

BigFoot said:
This league has created animals. I was going to look into a trigger job as well.
Click to expand...

A tried and true enabler.

This combination is for the Mk II and III, there is a different kit for Mk IVs.

I did some shooting this morning, I really like the Tandemkross Hive grip that I put on my Mk III 22/45, see the acquisitions thread for pics. Great improvement in hold for one handed shooting. I shot a personal best Slow fire of 85, but dropped a bunch of points on timed and rapid.
247-4x M
Slow 85
Timed 86-2X
Rapid 76-2X 1M

Hopefully I can post a better score later this week, if not this evening.

My slow fire is really bad. Asked a RO to watch me. He said I am pushing with my thumb. That makes sense as I am more relaxed 1 handed or rapid fire. I practiced today at 30 feet being conscious of that. It does seem to help.

Had a really good round on Monday and a good one on Friday. Monday's was better.

We're missing one set of scores. I'll post the wrap up tomorrow.

Tom
You must log in or register to reply here.

Who's interested in participating in an online .22LR Bullseye Pistol League?
2 3 4