"A fire destroyed a massive Jim Beam warehouse filled with 45,000 barrels of bourbon, sending flames shooting into the night sky and generating so much heat that firetruck lights melted, authorities said Wednesday.

Firefighters from four counties responded to the blaze that erupted late Tuesday. Lightning might have been a factor, but fire investigators haven’t been able to start looking for the cause, Woodford County Emergency Management Director
Drew Chandler said.

No injuries were reported, Chandler said. The fire was contained but was being allowed to burn for several more hours Wednesday, he said.

“The longer it burns, the more of the distilled spirits burn with it,” he said in a phone interview. “So when they go to put it out, there will be less contaminated runoff that goes into a drinking-water tributary.” 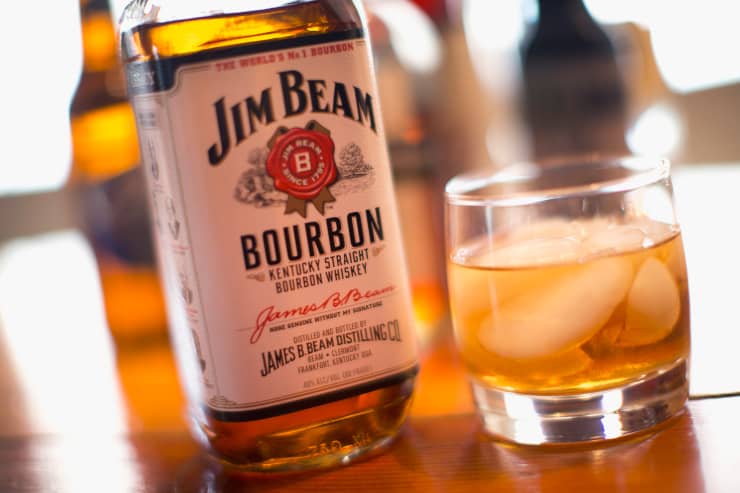 Officials from Jim Beam’s parent company, Suntory Food and Beverage, said the multi-story warehouse that burned contained “relatively young whiskey,” meaning it had not reached maturity for bottling for consumers.

“Given the age of the lost whiskey, this fire will not impact the availability of Jim Beam for consumers,” the spirits company said in a statement. [

The whiskey maker suffered a total loss in the warehouse. The destroyed whiskey amounted to about 1% of Beam’s bourbon inventory, it said.

Authorities were alerted of the fire shortly after 11:35 p.m. EDT Tuesday, Chandler said. The fire’s orange glow could be seen miles away, he said.

Firefighters who withstood the intense heat were able to keep the fire from spreading to three other nearby storage warehouses, he said.

“It melted lights off some of the firetrucks, it got so hot,” Chandler said.

The destroyed warehouse, near the Woodford-Franklin county line, was about 100 yards (91 meters) from Glenn’s Creek, a tributary of the Kentucky River, he said. Existing containment berms were reinforced with sand to try to prevent runoff into the creek, he said.

Samples were taken from the creek but he didn’t know yet the results.

Beam Suntory officials said the distiller has a “comprehensive” warehouse safety program that includes regular inspections and “rigorous protocols” to promote safety. The distiller said it operates 126 barrel warehouses in Kentucky that hold about 3.3 million barrels of its brands.

The Beam fire was the latest warehouse loss suffered by a Kentucky distiller.

Last month, a storm caused the partial collapse of a warehouse at O.Z. Tyler Distillery in Owensboro. The distillery soon started the painstaking process of recovering barrels as part of the overall plan to take down the entire building.

Kentucky distillers produce 95% of the world’s bourbon, according to the Kentucky Distillers’ Association".

"I'd rather be someone's shot of bourbon than everyone's cup of tea". Old Bourbon Proverb

Have not been to that plant but been to a handful on the KY bourbon trail. Living in Cincinnati it is fantastic to take a day trip. The sight and smells and OH YES taste is quite a experience.

I think the distilleries are going to have to take a serious look at their rickhouses and how they are built. Two recent collapses one that was averted (iirc), and now a fire? Something is going on . . .

Bakker1964 said:
I think the distilleries are going to have to take a serious look at their rickhouses and how they are built. Two recent collapses one that was averted (iirc), and now a fire? Something is going on . . .
Click to expand...

I am sure they will too much money too lose.
The industry is booming!!

Ugh, the price of bourbon is going to go up.

They're saying now a lot of fish have died because of the run off that resulted from the fire.

Wow, that is a lot of mash! They said it was young whiskey too. Wouldn't that mean that the impact on their supply wouldn't really happen until the time the whiskey would have been bottled?

Not only a significant fish kill, but the water in Frankfort had a sweet taste and a slight bourbon smell for a day or two.
J

MasterOfPups said:
Not only a significant fish kill, but the water in Frankfort had a sweet taste and a slight bourbon smell for a day or two.
Click to expand...

They are getting fined for the fish kill.

If you catch a surviving fish, is it already marinated?

I think it is mostly killing the bottom dwellers via lack of oxygen - carp, catfish, gar. Not stuff I would want to eat anyway, but it will probably change the ecosystem a bit, without scavengers.
You must log in or register to reply here.

Had A Little Gathering With Some Friends

Bourbon Feels the Burn of a Barrel Shortage!

A Bourbon Shortage? Say It Ain't so!
2