This was my first use of the Feather ProGuard Blade. This evening's shave was the 11th for this blade. After the shave I cleaned the blade with a soft toothbrush, dried it, and then took a very close look at the edge with my 12X Jeweller's Loupe. I did the same after five shaves with the same blade. Also, the blade was removed and cleaned after every shave. I am starting to see a few spots where the edge looks like a hack saw so the blade edge is starting to wear. I got a nice four pass bbs shave this evening and I'm pretty sure I could get a few more good shaves from this blade but I'm anxious to try a Feather Professional so I'm going to bin this Proguard after 11 bbs (4pass) shaves. I should mention that the blade was used each time in a RazoRock Hawk V2 SE Razor. I've used a lot of DE blades in a lot of DE Razors and I must say that these Feather Artist Club Blades are amazing. I don't like to use a DE blade more then 4 times and that goes for all the DE blades I have tried. Going ATG under the nose is where I really noticed the blade performance and the Artist Club ProGuard just stayed sharp for all 11 shaves. I could never achieve these results with any DE blade. I'm really impressed. 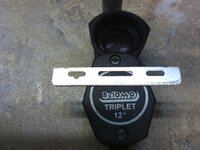 Moderator
Cool, thanks for sharing your thoughts with us.

Thought for a second you were complaining about "only getting 11 shaves." My apologies.

I just ordered a pack of those from Fendrihan. I've struggled with AC format a bit. I'm mainly jazzed by Gem and Gem-ish as well as slant razors. That said I've lately begun to consider my AC struggles.

I had, briefly, an ATT SE1 and an SE2. I found the SE2 to be difficult to like, which is strange as I generally tend to like an OC razor better than a SB. The SE1 was OK, but as someone said in another thread I was always "wide awake with my toes gripping the floor" when I used it. With a Proline blade I was reminded of my riotous youth -- getting cut with a truly sharp edge has an icy hotness to it that you never forget. I'll be clear that my struggles are just that: mine. They're not down to the blade or razor manufacturer. In fact, I still have more ATT razors in the cave than anything but ASR products.

I tried to trade them off as a package deal for an S1 and S2. Guy came up with an S2 and wanted to trade for the SE1, so I went for it. I still have the SE2 as a monument to personal hubris. I sent some Prolines and Feather Super Pros to the new owner, but kept an almost-empty pack of Feather Pros. I tried steep angle shaving with the SE2 and it worked much better, but scraping my skull that way killed blades pretty quick. Two dollar blade; three shaves -- I'm not in it to save money but I'm not in it to throw money away, either.

So I'm waiting on the ProGuards. I'll try them in the SE2, my only AC razor at the moment. I'll see how it goes. Thanks for your review!

Only used the feather pro blades. The pro guard blades scare me.. I dint understand the guard thing

Contributor
I don't understand, why would Proguard blades scare you? They are actually more forgiving than the regular Feather Pro blades, hence the 'guard' in the name. I would suggest you order a few blades from "try a blade" (there is another company that also will sell individual blades). You may also want to try the Kia Protouch blades, similar to the Proguard blades. Personally, I like the guarded blades and feel they give as good a shave as the un-guarded blade.
B

shotgun233 said:
I don't understand, why would Proguard blades scare you? They are actually more forgiving than the regular Feather Pro blades, hence the 'guard' in the name. I would suggest you order a few blades from "try a blade" (there is another company that also will sell individual blades). You may also want to try the Kia Protouch blades, similar to the Proguard blades. Personally, I like the guarded blades and feel they give as good a shave as the un-guarded blade.
Click to expand...

I have one to try I have the whole sample set. Haven’t made it to the guard blade yet.

I received my first box of Guard blades today and intend to use one in a ACFeather kamisori shavette tomorrow that I've put off using until the Guard blades arrived.

I use the Feather ProGuard blades in my Colonial General and they are great blades!