Moderator
Just watching a cooking show on the TV called Bonacini’s Italy and he made what looked like quite an easy pizza/pancake like dish called Farinata. Does anyone here make it and is it that easy to make? LOTH likes chickpeas and I thought I might give it a crack if it was that easy to make. Any recommendations on it or a variant of it?

Yes, it is very simple to make. It is a street food in parts of Italy and also in France, where it's called socca. It is like a giant pancake made with chickpea flour, olive oil, herbs, salt and pepper.

This is essentially a large chickpea pancake from Provence (and neighboring Liguria, where it’s called farinata) It’s traditionally cooked in wood ovens on copper disks, roughly cut and served hot or warm (In the main market in Nice, it’s baked a few hundred yards away and delivered by bicycle...

Contributor
I know I've had it or something like it, but I've never made one. Heck, I never really considered making it. It actually sounds sort of fun to make, although I would either need to get a proper pan or make something work.

TexLaw said:
I know I've had it or something like it, but I've never made one. Heck, I never really considered making it. It actually sounds sort of fun to make, although I would either need to get a proper pan or make something work.
Click to expand...

A large cast iron skillet or pizza pan will work. You can preheat the pan fairly hot at the start. You want the pancake to be fairly thin so it cooks fast.

You can get chickpea flour very cheaply if you have access to an Indian market (called Besan).

If you make this, it helps a lot to let the batter "rest" in the fridge for several hours. This lets the chickpea flour absorb a lot of water and become soft. It will be easier to digest with less of the bean effect, if you catch my drift.

You can also try different add-in ingredients to the basic recipe.

Contributor
I gave this a shot tonight. It's a very simple recipe, but there's a lot of waiting time. It didn't turn out terribly pretty, but it should did taste good. Even the parts that look like they are burned black tasted good. I'll do this again, for sure, and sooner than later. I needs a little tweaking, but not too much, I don't think. 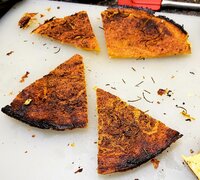 100 g chickpea flour
300 g water
4 g salt
50 g olive oil (actually, I used more because I thought I needed it, but I don't really think I did)
Freshly ground black pepper (as much as you like--I used a good tablespoon or so)
Rosemary (about a tablespoon fresh or a teaspoon or so dried--whatever you like)

Add enough of the water to make a very thick mix (about half) and stir with a whisk to smooth out the lumps as best as you can. Add the rest of the water and whisk until lumps are go or as good as you can get it. Whisk again about a few minutes or so to get rid of all lumps. It's a very thin batter. Let the mix sit at room temperature for at least 4 hours (I went about 4.5). Recipes say that 8 hours is even better, and one said that 12 is even better still.

To cook, preheat your oven to around 550F or as high as it will go (I was at 555 F). If you have a baking stone or steel, have it on a rack in the upper half of the oven (probably 2nd or third from the top, depending on your pan/skillet and oven) and let that heat completely. Place your pan or skillet on the stone/steel (or just in the oven, if no stone) to preheat (a pan should only take a few minutes--5 wasn't quite enough for my skillet, or maybe my stone wasn't completely heated). While the pan/skillet is preheating, skim off and discard any foam on the top and then stir in the salt. Remove the pan/skillet from the oven, pour in the oil and swirl to cover the bottom. Pour in the batter (one recipe said to do so over a wooden spoon, and I'll do that next time--the idea is to have oil below and to some extent above the batter). Sprinkle on the pepper and rosemary (I might stir in the rosemary next time, as it got pretty well obliterated on top). Put the pan/skillet back on the stone and turn on the broiler.

Cook until the top is well browned. That was about 10 minutes or so in my oven at that temp.

The flavor and texture was excellent--crispy on top and custardy inside, but it could be crispier on the bottom. Getting the stone and skillet hotter probably would help with that. I suppose I should give it a longer resting time, too, just to see what difference that makes.

Pretty good for your first try at it. Preheating the pan more will take care of the bottom not getting crisp. Do mix in the herbs and overnight in the fridge will put the flavor of the herbs into the batter more. Do not beat the batter much at all, it will make the socca tough. You can cook the whole thing for less time but put it under the broiler to get the top crisp. If you leave the batter out of the fridge for more than a few hours it will begin to ferment. Indian cooks do this on purpose for some of the foods they make, like dosa and idli.

Atlantic59 said:
If you leave the batter out of the fridge for more than a few hours it will begin to ferment.
Click to expand...

A couple of the recipes suggested that is exactly why it should be left out at room temperature. I also expect that's why the salt should not be added until just before cooking.

Contributor
I've been working on this, and I think I'm getting it. The good part is that it's always tasty, and leftovers make for a good breakfast. 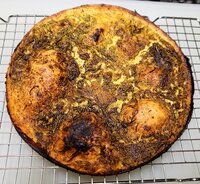 Contributor
My first attempt at making Farinata was last night when I was on my own for dinner. I decided to add a little caramelized sweet onion and red bell pepper along with some ground dried rosemary. I cut the recipe I used by a 3rd and used my #7 Griswold. It was tasty enough that I ate it all for dinner, but next time I think I want to cut the recipe in half if I use the #7 again and see how it goes if it's a little thinner. 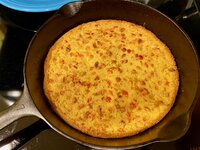 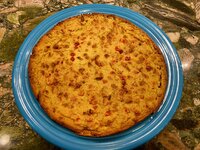 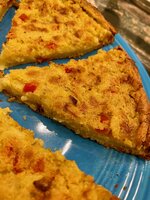 Contributor
Alright, these are fun! I mixed things up a little with this one. I substituted tarragon for rosemary, as well as a bit of freshly ground fennel seed for some of the black pepper. 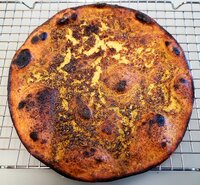 This one also got a little different treatment, in that the batter spent the night in the fridge. Originally, I intended to bake it last night for a light supper, but then a friend wanted to go out for some beers. The batter had been sitting out for around 7-8 hours, but I just put it in a container, popped it in the fridge, and then took it out this morning to come back up to temp. Instead of an excellent light supper, it was an excellent late breakfast, and one I'll happily have again!

Contributor
I'm getting pretty good at this. 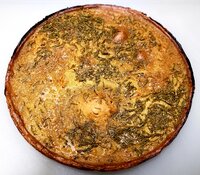 TexLaw said:
I'm getting pretty good at this.

You are. There is also mixed Italian herbs and smoked paprika to consider.

Atlantic59 said:
You are. There is also mixed Italian herbs and smoked paprika to consider.
Click to expand...