For my past three shaves for OCtober, I shaved with three different dual comb razors. The results were very interesting (for me at least), and so I decided to do a shave review of all three. The Emir is a vintage razor and so not easily found. The Shavecraft 101 you can still find around if yo look hard enough, but Ikon has not produced them in a while (or any other of their razors for that matter). The Mulcuto No. 1 can be found in Europe or by mail order through their web site and is currently in production by a company that bought the Mulcuto name. So, on with the shaves! 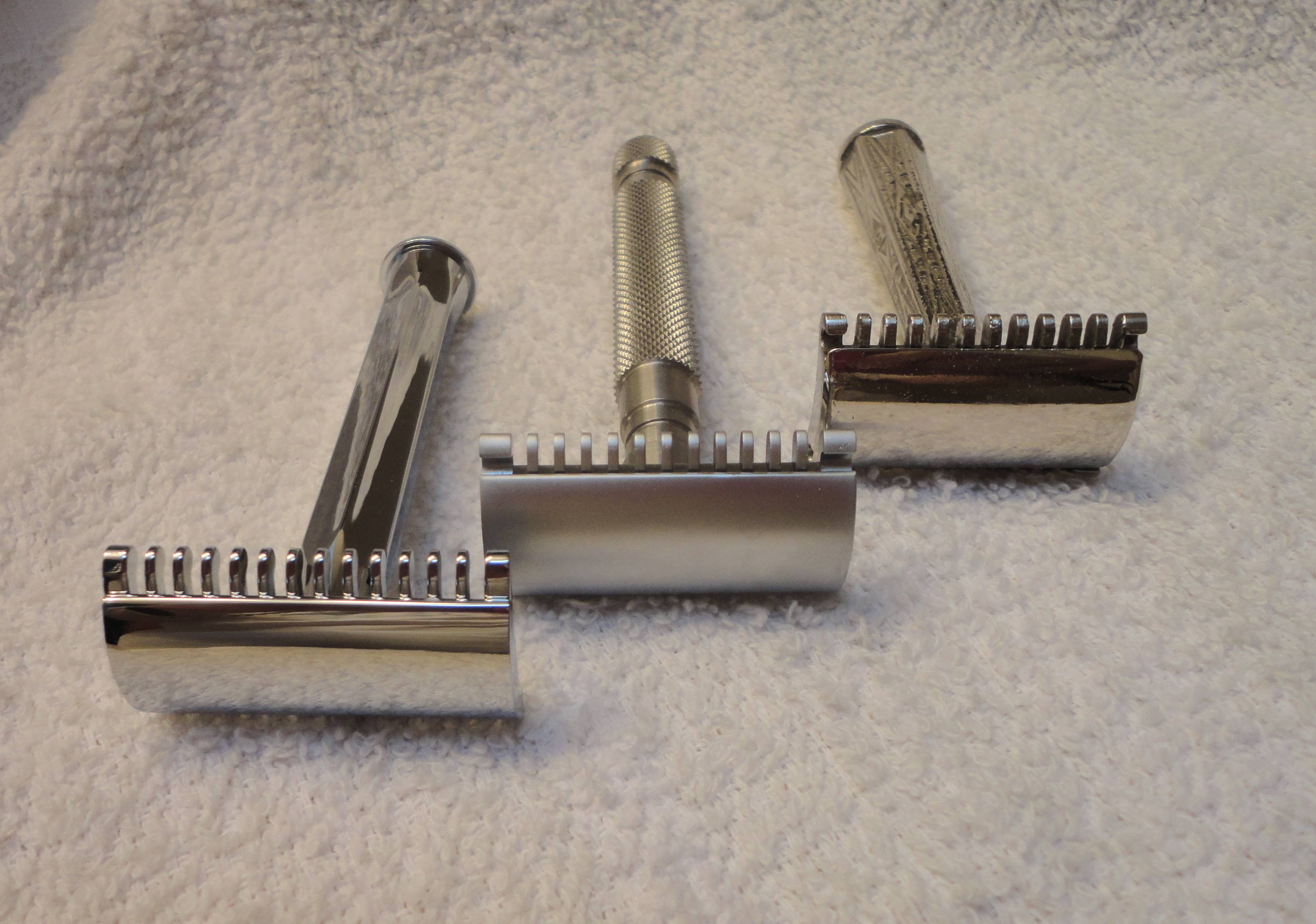 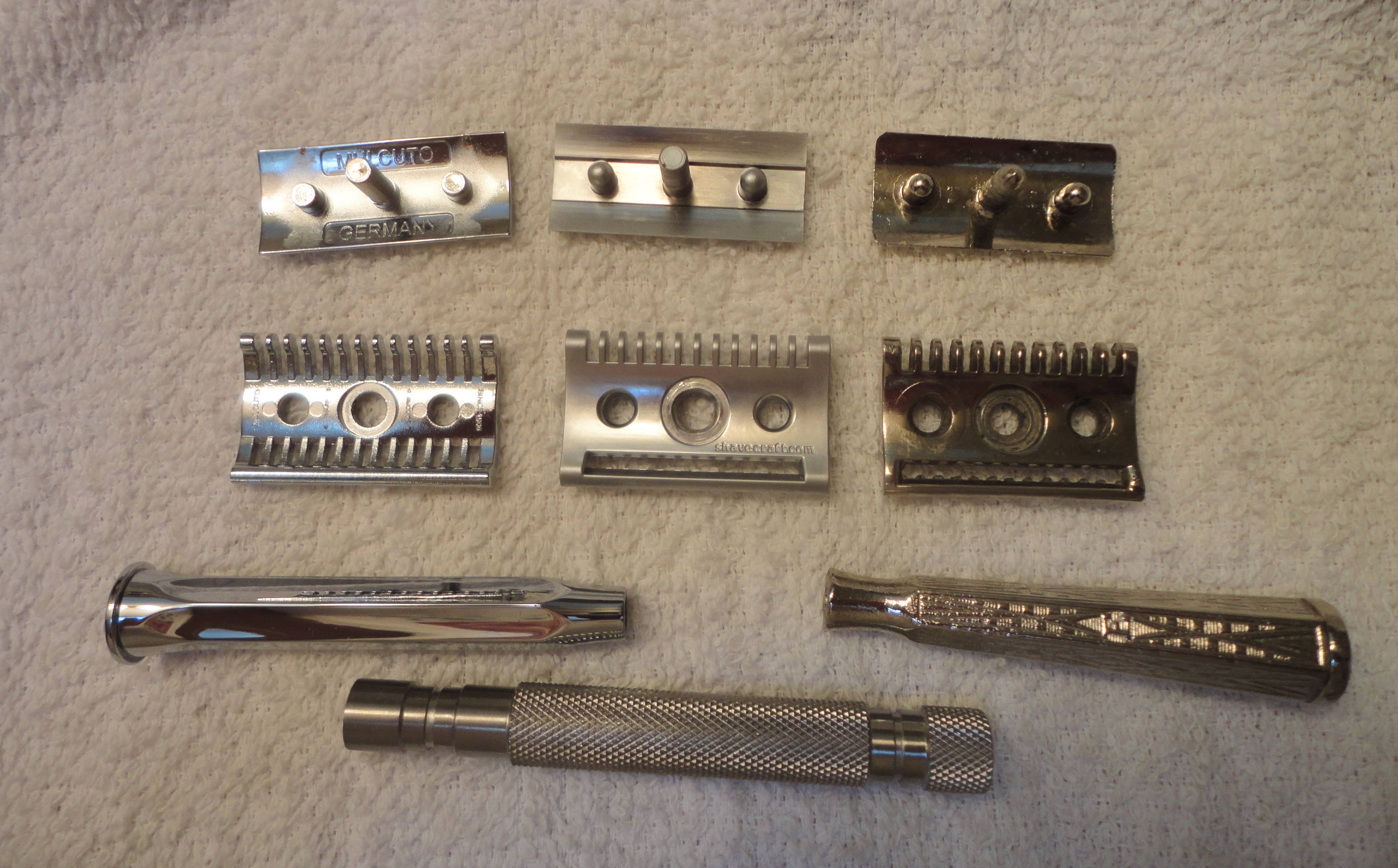 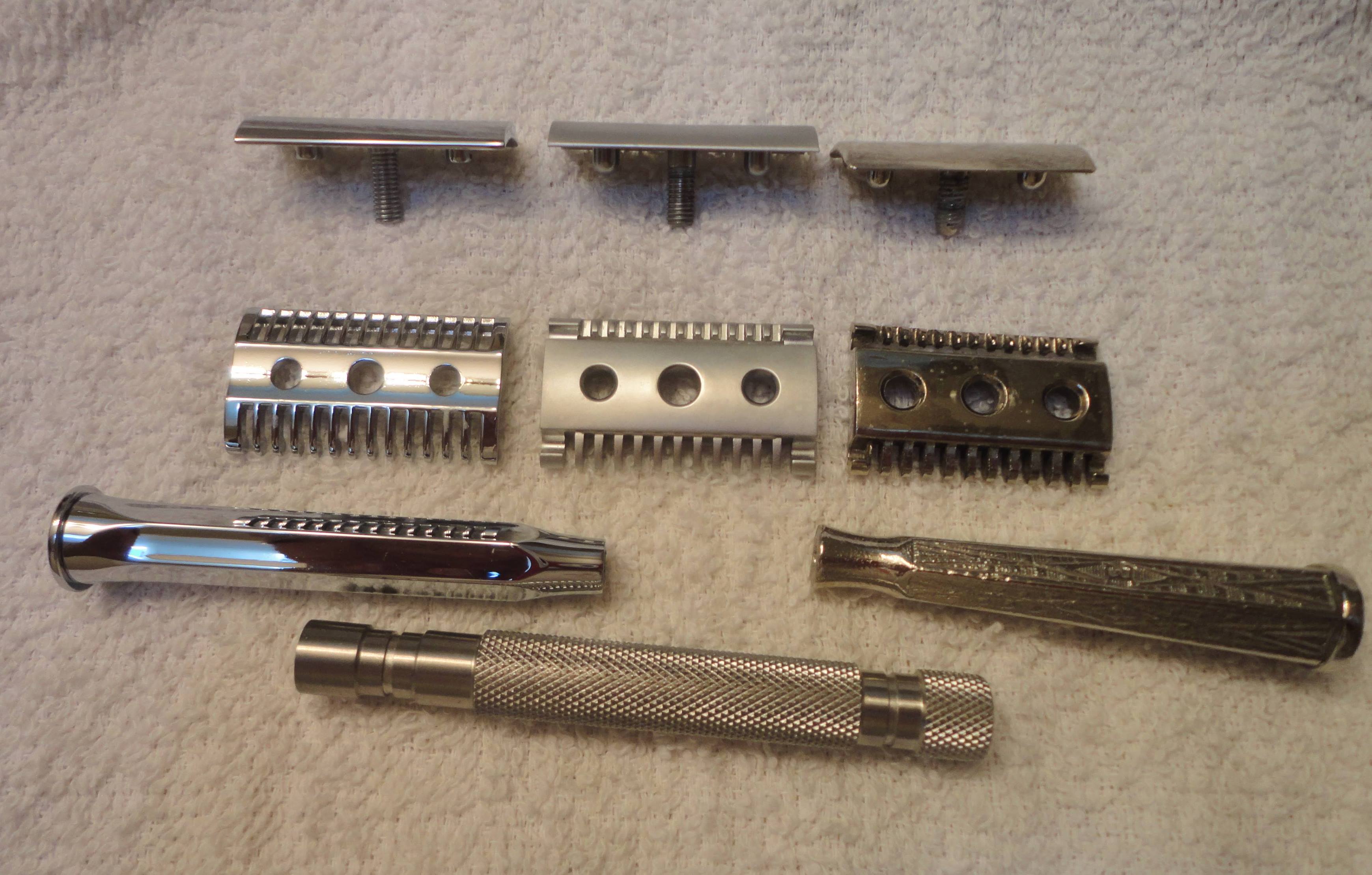 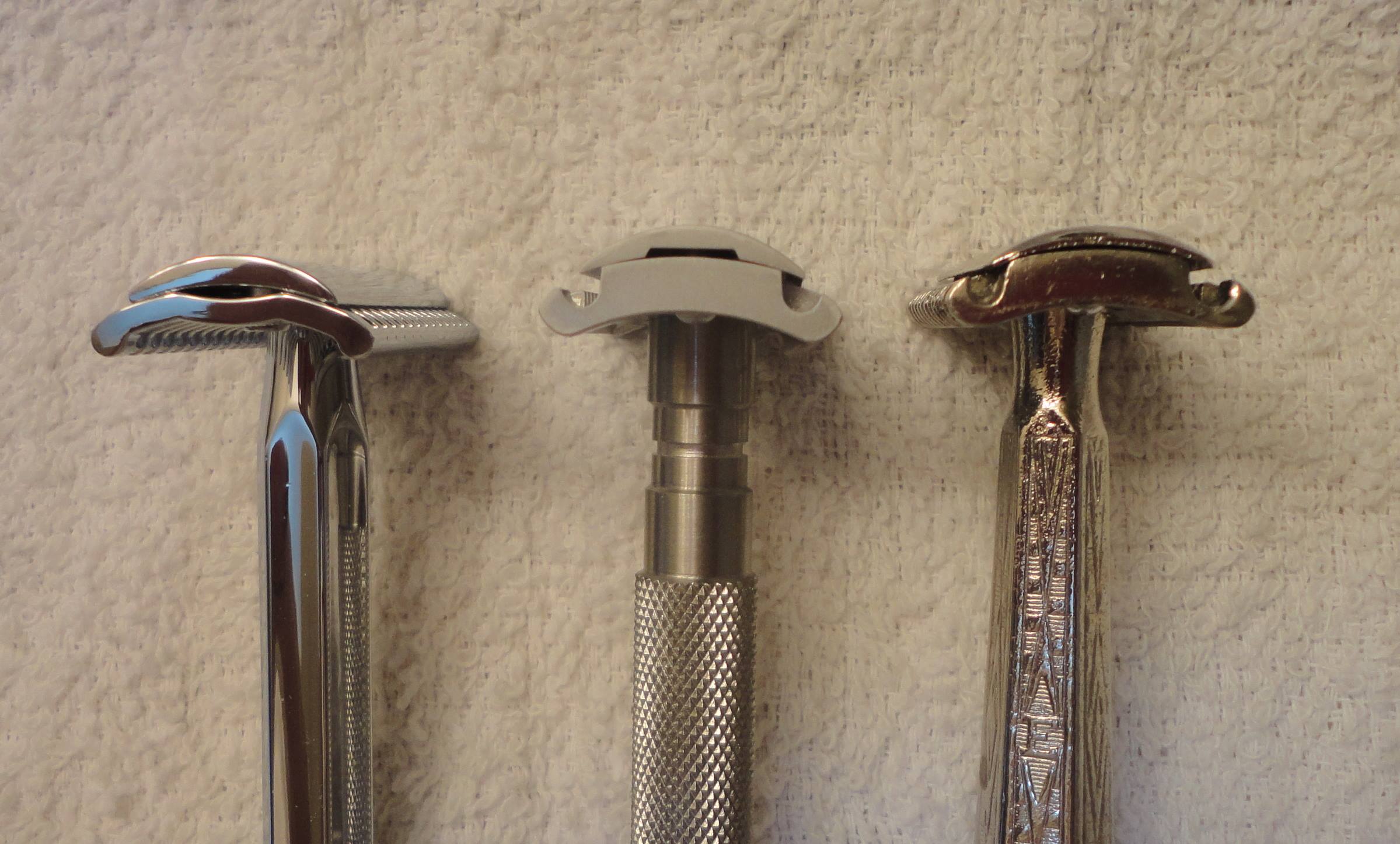 This was my original dual comb razor. When I first shaved with it, I found the OC side to be milder than the SB side, which was a surprise. I noticed that the blade alignment was slightly off and so I carefully held the blade and top cap in place as I tightened the handle. While there was some improvement, the OC side was still milder than the SB side. One thing I noticed was that the OC side had the teeth face upwards like in a trough which could account for the mild shave. From that point forward, I always started WTG using the SB side. ATG depended on what the results of the first pass was. If it was good, then I switched to the OC side for ATG and finished off XTG with the SB. If the first pass left too much stubble, I would do the ATG pass with the SB and XTG with the OC.

Both sides gave comfortable shaves, with the OC side giving a very comfortable but less efficient shave. This is a razor where the angle is very important and I found that the angle wuld vary depending on which side you were shaving with and if you were going WTG or ATG. I would always end up with an effortless two pass plus touch up DFS.

The Shavecraft is a pretty close clone to the Emir, with both sides being a trough design and with a high middle area in the base plate. The head is larger because it covers the blade tabs. It was a good thing that blade alignment was not a problem as it was for the Emir since I could not use the blade tabs to align the blade. The top cap was also slightly more domed.

When shaving with the 101, I noticed that unlike the Emir, the OC side definitely had more blade feel (more like I would expect from an OC). The SB side was more comfortable a shave, however it seemed that there was not a large difference in efficiency. The top cap being a little more domed helped with finding a shave angle that was efficient for both sides of the razor. Both sides cleared whiskers about the same. I started WTG with the OC side and it was definitely more efficient than the Emir OC side, but less comfortable. I then went ATG using the SB side and this time is was more comfortable than the Emir. I finished XTG with the SB side and ended up with a two pass plus touch up near BBS

This razor is a very recent manufacture (still being produced), however not by the original Mulcuto. Apparently another company bought the name and produced this razor. I got this razor used, but the seller said there was less than 10 shaves on it (I guess that should have been some kind of warning). The razor itself was very good looking and plating on it was decent, however there were two spots under the top cap where plating was starting to weaken. The other thing I noticed immediately when I started taking the razor apart was that the screw post was very long, even longer than the Shavecraft, which is known to have long screw posts. Like the Shavecraft, the head was large enough to cover the blade tabs, and luckily, there was not a problem with blade alignment.

While being similar in concept to the Emir and Shavecraft, the similarities end there. The base plate is just curved and not raised in the middle and the top cap is slightly thicker. It has a very long comb on both sides, and the comb curves downward like a traditional open comb. The side with the bar is the same way. This makes the shaving characteristics very different. My first pass was WTG and I used the open comb side. I found that I had to ride the comb more than I usually do, and I had to stretch my skin ore than I usually do. I used the OC side for my WTG pass it felt like I was just clearing lather, but I was surprised that I actually did cut whiskers. For the ATG pass, I used the SB side and found that I had to again change the angle and really stretch my skin. The ATG pass still left more whiskers than I preferred, and so for my third pass I went XTG using using the OC on one side of my face and SB on the other. I was surprised to find out that, like the Shavecraft, efficiency was similar no matter which side I used, and like the Emir, both sides were equally as comfortable with very little blade feel.

So, after shaving with all three razors, which one did I like the best?

The Emir scores very high in cool factor. It is a beautiful razor and a very interesting concept. When the blade is aligned properly, it gives a very deceptively efficient shave, however if the blade is just slightly off, the SB side will be overly aggressive, while the OC side will just be clearing lather.

The Shavecraft I found to be the best shaver of the bunch. There was no blade alignment problem and both sides shaved efficiently with the only real difference being that there was more blade feel with the OC side. The head was slightly larger which made it slightly less maneuverable than the Emir, but this did not affect the shave. The more domed cap made it easier to find the right shave angle that did not change depending on the side you were shaving with.

As for the New Mulcuto, it fell in between the other two. It scored second on the cool factor behind the Emir (only because the Emir was the original vintage), and fell slightly behind the Shavecraft in the shave (only because the Emir came in last because of the blade alignment issues and the Mulcuto required more effort to get a good shave). I really had high expectations for this razor as I have a couple of vintage Mulcuto slants and think they are some of my best shavers. It looks very nice with the railroad spike handle like the original vintage Mulcuto, however it was not an easy razor to shave with and I had to put in a lot of effort to get a decent shave. This is a not bad first attempt at reintroducing the brand name, but hopefully something better will come out in their next attempt.

Thanks for the review, all 3 razors look very cool.

Floating out there is also a Chinese EJ89 clone type SB/OC. 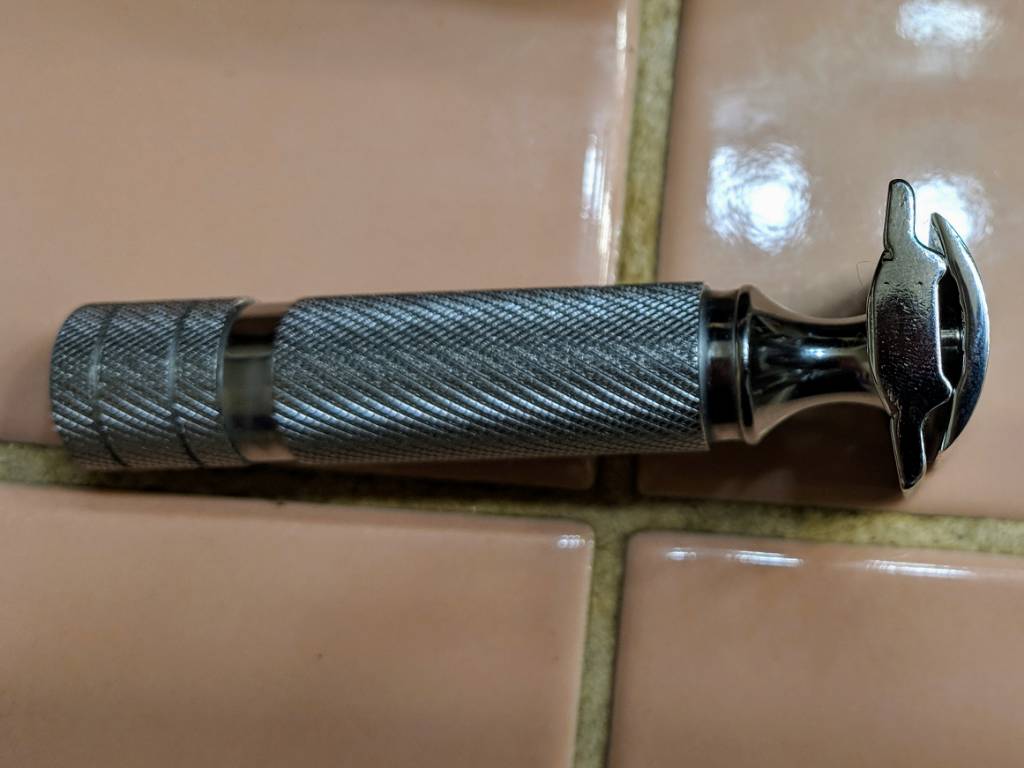 jmudrick said:
Floating out there is also a Chinese EJ89 clone type SB/OC.

I saw that on Aliexpress a couple of weeks ago and I think it made it's way to eBay already. This has a more traditional SB side, not unlike the original Ikon dual comb. Of course Timeless and Charcoal Goods will do it for you for a price (and the Timeless one has that trough design like the Emir and Shavecraft.

Great comparison of some interesting razors!! Thanks!!

Yep, I just traded for the Timeless dual comb.

gvw755 said:
I saw that on Aliexpress a couple of weeks ago and I think it made it's way to eBay already. This has a more traditional SB side, not unlike the original Ikon dual comb. Of course Timeless and Charcoal Goods will do it for you for a price (and the Timeless one has that trough design like the Emir and Shavecraft.
Click to expand...

The Bandit by Alpha Shaving Works.