The Gillette Double Ring, the first of its kind, the original DE, the razor so many of us covet. And lets face it its just damned cool to have a razor so damn tough it scares straights away 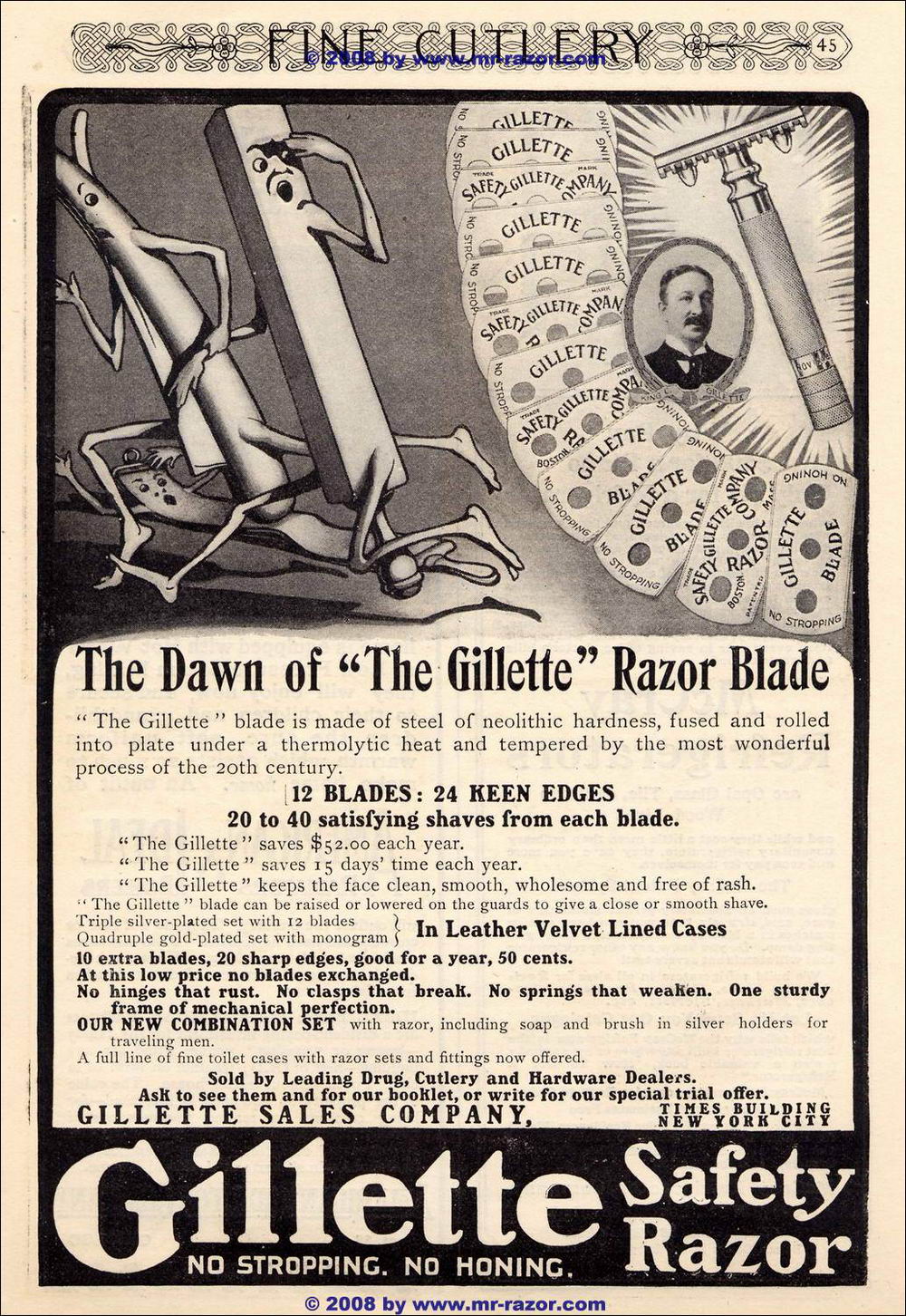 A while back I got ahold of a 1904 'Pat Appld For' Gillette Double Ring in a lot of junk razors on ebay. It was covered in both dirt and tarnish, was siezed shut and had one missing tooth as well as several severely bent teeth that would snap off if I even thought about straightening them. Basically it was a junker, it had almost no collectors value and was worthless as a functional piece So after some thought I came to the conclusion that I could try and fix it by replacing the comb with the comb from a Single Ring which is the same part really.

Now purists may say that I was taking away from this razors originality but the inner tube that came with it contained a serial number that was higher than DR production figures and so was not an original piece. So really it was technically a frankenrazor already and one in pretty bad shape at that.

Getting the razor in the first place proved tricky since it was a CONUS only sale but luckilly for me Chris (SavantStrike) was honing a razor for me and he agreed to receive the package for me and then post it onward to Australia. That business sorted and the razor safely with Chris it stayed there for a while and I just had to wait. During this time Chris took a few pictures of the lot which is fortunate since I never actually thought to take a 'Before' photo of my own.

Once I got the razor I then had to track down a single ring comb. I had several offers of 3 piece Old Type heads bu these lack the indent that the handle fits into on a Gillette 2 piece razor and I did not think I could accurately drill one n myself. In the end I procured to test subjects from Dave (D.Irving79) and in hindsight I'm kinda not surprised that he had spare 100 year old razors laying about.

To remove the comb from the original Double Ring handle I simply took to it with a file and filed the old comb straight off. The comb is sort of riveted on, there is a lip around the top of the handle that holds it on remove that and the comb falls right off. However whilst this method doesn't damage the handle it does eat into the surface of the comb quite a bit.

To remove the combs from the single rings (I did it twice because I had a practice round) I used my dremal on its lowest speed setting with an 83142 Silicon Carbide Grinding Stone fitting. There is a hole in the top of the handle where the cap drops through when you put a blade in. Basically you remove the cap and slowly work the dremel around the edge of this hole wearing away the riveted section of the handle so that the comb will drop off (does that make sense?). This method does the opposite of the file method it preserves the comb at the cost of the handle.

Then after a quick cleanup I mixed up some Araldite 24hr set epoxy resin (super strong and it sets clear rather than grey like gorilla glue). I simply applied some epoxy and sat the razor up on its end while the epoxy set. After the first couple of hours I fully assembled the razor and clamped it tightly before setting it aside for the next day or so. I did not do the clamping initially because I was worried I'd somehow manage to permanently glue the cap on and have a useless razor after all my work.

After the glue was set it was time for a final round of polishing and this little razor is looking good! Like you'd expect with a 100+ year old razor there is some brassing in the knurled sections but its far less obvious in person, the photos really exagerate it.

If there is enough interest I might see if I can track down a few more old single rings and take some photos of the process. But it is a wasteful method since it takes 2 razors to make 1 razor so best that one has a broken comb and one has a split handle or something like that.

Also the last attachment is the before pic, no idea why it came in last like that.

Nice work. To me this is no different than steps needed to restore vintage cars. You clearly posses resourcefulness, ingenuity and artistic skill.

Thanks for the compliment, but I'm just a guy with a dremel and some maas.

I do see your point with classic cars though. And the use of the comb from a single ring means that there is a serial number stamped into the comb that is higher than any number used for an original double ring. So the astute collector will not be duped into thinking its original either.
S

cool. But the moment of truth... how does it shave?

I'll know after my next shave.

This is a wonderful story and you clearly have skills beyond just admiring classic razors. Well done!! And thanks for sharing!!

Well shaved with it just now and I think the weight is a little better than my Ball Ended Old Type and the slightly longer handle allows for better handling. Definitely the best shave I've gotten from an Old Type first time around but I think it will take a few more shaves to truly develop an opinion of it.

But using it just feels special.

"made of steel of neolithic hardness"
"tempered by the most wonderful process of the 20th century"
"20 to 40 satisfying shaves from each blade"
"10 extra blades ... good for a year"
You must log in or register to reply here.

Above the Tie - SSRH2 Base Plate and S1 Head

How I Started On A Safety-Razor