Do you still have the straight razor you learned to shave with?

pretty cool texturing, earcutter.. how many in your collection are like that? and what is it?

Put some new scales on it though.

global_dev said:
pretty cool texturing, earcutter.. how many in your collection are like that? and what is it?
Click to expand...

Thanks. I really like my 4/8s. So I started to collect them. I’ve got all kinds of them. I picked my seven best shavers and rescaled them all to look identical(ish). The scales are textured micarta lined with tin. Great balance. I textured it with a Dremel.

It was a fun project. But it’s kind of silly for me to have a seven day set. A good straight shave sees me get away with shaving every other day! A three blade set would have been perfect.
P

It was a nice wee genco but got lost.

Sure do and it’s still my only one! I’ve ordered a few more (Swedish and French) but they haven’t arrived yet. I can’t see me letting this one go in a hurry. 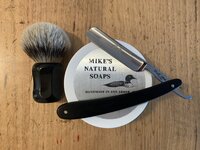 Tanuki said:
My Dovo Best Quality 5/8 full hollow was my first new SR. Very reasonably priced, especially for a German product. It shaved fine after I did a little lapping film finishing on it. I did buy the version with the slightly heavier, beveled plastic scales.

Coincidentally, I shaved with it today before I found this thread. It is a far better razor than a much more expensive (even after a big markdown) Thiers-Issard I returned recently to the vendor.
Click to expand...

Never tried a TI, I have heard they have a lot of issues too, I did try another modern german razor, and it was just as bad as the Dovo I had
I'm pretty sure they all get their blanks from the same manufacturer, so I am stickign to vintage razors, that imo have better steel, andd that cost a lot less than any modern razor if you are smart about your purchases. I got both my Wade & butchers for around the same price as modern dovos, so I consider that a bargain.

First two razors was a pair of 6/8th Famous Es-ex razors that I picked up from eBay for about £30. Two and a half years ago. One just needed some love with CrOx paste on a paddle strop to get a reasonable shave. The other one was a lot more challenging for someone just starting out. I have been honing my own knives for many years on a cheap combination 3k/8k stone, but this was different and I think I very much overdid it with the bevel setting. Got there in the end, and after my finishing techniques improved, both of them now shave great. Didn't have to go back to the stones again.

Now I really appreciate their very thin grinds, and it's unlikely that I will ever sell them on. 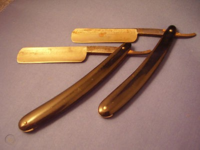 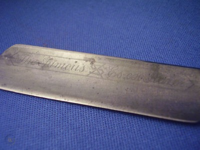 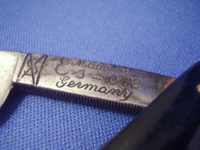 *stefan* said:
Do you still have the straight razor you learned to shave with?

I tried first with another that I honed one King stones and stropped on pasted denim and then diamond pasted leather (same with this E A Berg) but never got it sharp.
I found this other first straight recently and I kind of understood why now. It’s been honed down completely by me and perhaps the previous owner before. But I might give it a try now to see if I can beat that Solingen razor, my nemesis. I do like Solingen razors now

Contributor
I still have my first razor, only around 6 years ago, a Kropp and by pure luck a good razor. It did take a long time to get a good edge on it though and learning to shave with a blunt-ish razor isn't fun. 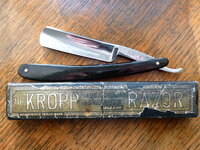 alla2465 said:
No. Dovo best quality 5/8
it was crap, can't believe I learned to shave with that thing tbh
Click to expand...

NOOOOOOOOOOOOOOOOOOOOOOOOOO!!!!!!! I tossed my first razor, a Dovo Best like that one, when I got my second razor, a junk shop vintage Boker. That Dovo was probably one the the three or four wonkiest, twistiest, poorly ground *** I have ever tried to hone or to shave with. In the following decades I owned two more, a Best and a rebranded Col Conk, and they were nearly as bad. I would be ASHAMED to sell a razor like any of those three for anything over RSO prices.

Of course my first razor had the infamous Dovo factory edge. I bought it from a cutlery shop in the newly opened Riverwalk, the sort of shop with reproduction samurai swords and Klingon battle axes and 17" long Bowie knives and hollow handle survival knives and belt buckle and boot and neck knives. The guy knew nothing about razors except that "Look, it says right here on the blade, 'Best Quality'!". He had no strops or hones, of course. I bought it cause I thought it would be cool to shave with a straight razor. I had attempted to shave with my very sharp pocketknife but of course that didn't end well, and I put it down to wrong equipment so when I saw the razor in the shop window, I pounced.

So I was, unbeknownst to me, in the classic dilemna, needing to have a sharp razor in order to learn to shave, and needing to learn to shave in order to understand what was required of the razor's edge and what a truly shave ready razor looked, felt, shaved like. I had a monstrously huge piece of extremely fine and hard quartz rock sort of like an extremely hard arky, and I knew that would put as sharp an edge on my razor as I could hope for. Unfortunately I did not truly understand how progressive honing worked. The shop guy said only that I needed the finest grit stone I could get my hands on. What I didn't realize was that even a 1k Norton would be far too fine and slow to set the bevel on this warpy blade. A 400 grit India would have been too fine unless I had nothing but time on my hands. I probably put a total of 60k laps on that razor, all told, in that first 6 months, on that humongous Mexican stone. Of course the Dovo only sneered in derision at such a slow, slippery stone attempting to rub off any substantial amount of steel. I needed to be on a 100 grit to get in the ballpark, then move up to 1k or so to finish setting the bevel. And here I was trying to put a twisted sister shoulda-been-reject to rights with the equivelant of probably a 20k stone.

I did, at least, understand that the spine belonged on the stone and not up in the air. I sprang for a shave at the local barbery and paid double for it, showed my razor and my rock, and he said I should toss both. Kinda hurt my feelings LOL! But he showed me his razors and did a HHT though I didn't know that was a popular thing or that it even had a name. I showed him my pocketknife which shaved arm hair like butter and he showed me that all my knife would do was at best violin the hair. I told him I had been shaving with the razor for several months and I truly have never seen such a look of extreme pity in my life as what I saw on his face. Anyway I got all the info I could digest and retain from him, which wasn't much. I resolved to try honing it on my soft and hard Arkies that I used for my knives, and then the Mexican rock. I still just didn't get it about the bevel and the importance of creating it fully and completely in the first stage, and also because the spine and edge were not aligned, I had pretty nearly zero bevel at the toe on the show side and pretty nearly zero bevel at the heel on the back side.

Finding the vintage blade gave me a step up from the shaving hell I was in. I owned a strop by this time and I thought I would try jst stropping and shaving. I survived the attempt, which went much better than I had expected. Tried honing on the Mexican rock. No improvement. Tried honing on the hard Arkie and then the Mex rock. Ahhhhh... that's better. Still pretty sucky but I knew I was on the right track, finally. Eventually after a couple of years I had the edge I thought as sharp as the barber's razor. Shaves steadily improved. A few years later I bought the Conk from the same shop as the Best, not realizing it was the same thing. And it was just as bad. Meanwhile I picked up another vintage blade from the flea market and it shaved as well as my hand could make a razor shave. As my edges got better, my shaves got better. As my shaving skills improved, my honing improved. This took many many years. Finally Al Gore invented the internet and I found I could learn ANYTHING on the www and on usenet which was big at the time. With all that information at my fingertips I finally managed to get shaves that did not leave me looking like I slept on a pillowcase stuffed with poison ivy and blackberry brambles. Along the way, I picked up another Best, thinking third time is a charm. This was before I started messing with Gold Dollars. All three eventually got tossed. After getting medieval on the GDs with belt sander and Dremel, I was probably ready to tackle those three crappy Dovos but at the time I just didn't realize how harsh I needed to get to beat those Dovos into submission. Not saying all Dovos are bad, cause I truly like the Bismarck and Prima Klang, but honestly I would much rather have a GD than a Dovo Best Quality, even now.

The old Boker is probably still in my collection somewhere. My first razor, absofrigginlutely not.

A Pumacker Black Diamond in virtually unused condition... It cost me all of $14. The only razor I ever needed, but I didn't know it at the time...

Moderator Emeritus
I sure do a gold dollar that I modded in 2017 for the competition, and gave it a gold blade so no I will never part with it.
But gained many more since then....

Absolutely, yes. My first was an EKS Gold Krone 5/8. Over the years I managed to obtain more of these blades, although the maker really wasn't in business for very long - maybe only 4-5 years, some 100 years ago. I found them to be extremely well made, with some beautiful specimens out there. It was just my luck back then, but it definitely sparked the fire and love for these old tools.

Contributor
No... It was a Ralf Aust 5/8, full hollow, round point.

I found I like 6/8+ shorties with heavier grinds, so the Aust was eventually sold.

Contributor
My first was this Thiers Issard

It is still in my rotation.

Yes, a 5/8 Bengall. It’s still a great shaver. Shout out to Legion who was the seller. I still have 1/2 the strop as well, now of the paddle variety. I even have the balsa chrox which I use every now and then.

ebonysw45 said:
Yes, a 5/8 Bengall. It’s still a great shaver. Shout out to Legion who was the seller. I still have 1/2 the strop as well, now of the paddle variety. I even have the balsa chrox which I use every now and then.
Click to expand...