Deer rifle for a novice hunter

Moderator
What up y’all!

I’m in the market for a deer rifle. I’ve never gone deer hunting. Well....any type of real hunting for that matter.

I’ll likely go deer hunting once per season. Maybe twice. So I don’t want to spend an arm and a leg.
I think my budget is $700 or less. Any in that price range worth it?

Probably need a scope too?

There are inexpensive bolt guns these days; also good for anywhere, really.

Ah, since you're not going alone, perhaps your hunting buddy can tailor-fit something more closely.

Moderator
Thanks! I updated the post with hunting location. Middle TN landscape during winter months. Nov-Jan

Contributor
30-30 Carbine should do nicely. Marlin is a good choice. Just sold my examples since it's been a couple decades since I got to go hunting.

30-30,as previously mentioned, is a great fit. I would see if you could borrow one before committing to buying one. I used to love deer hunting, although I plan on getting in some bird hunting this year. If you find you enjoy it, you might get something a little cheaper at the end of deer season.

Enjoy the time in the field and be safe. I no longer go out on opening day for any game species. The woods are pretty full of hunters during the first day of both deer and pheasant seasons in Upstate NY.

Do you have experience shooting rifles?

Boy...you sure know how to open a can of worms, don't you Jason?

I'm more of a handgunner, but as has been said, for heavy woods a .30-30 is a classic. Dad got me a Marlin for deer hunting when I was a kid because he said they were better built than the Winchester 94.

For those smaller deer in your area, not like up north, for a bolt gun a Savage in .243 with a decent scope may be a consideration. Light recoil and good enough for a deer there. I've got a Marlin .30-30, and Dad's old Winchester Model 70 in .270 with a variable scope, and his Remington 721 in .30-06 with his a period Weaver 4X scope. And I grew up in N.E. Oklahoma woods.

This is my Marlin, pre crossbolt safety. Just be aware that those only have the halfcock safety. It may be good to carry it with an empty chamber until you get to where you are going to sit. If you drop it, it may break the sear and fire with a round in the chamber.

Lightcs1776 said:
30-30,as previously mentioned, is a great fit. I would see if you could borrow one before committing to buying one. I used to love deer hunting, although I plan on getting in some bird hunting this year. If you find you enjoy it, you might get something a little cheaper at the end of deer season.

Enjoy the time in the field and be safe. I no longer go out on opening day for any game species. The woods are pretty full of hunters during the first day of both deer and pheasant seasons in Upstate NY.

Sent from my SM-G960U using Tapatalk
Click to expand...

What type of scattergun do you have for birds? I wub pheasant.

As has been noted, the kind of rifle depends on where you'll be hunting. It'll also depend on the type of hunting. Hunting from a deer stand is different than stalking or on a deer drive.

If you've never been hunting before, it probably would be a good idea to see if you could borrow a rifle rather than buy one. It could turn out you don't like it, or do like it but don't like the rifle. If you are unfamiliar with a rifle, spend quality time at the range with the rifle and a friend who hunts long before you go on the deer hunt.

Even if you buy a rifle, you'll need to spend quality time at the range, preferably with a friend who hunts. That's because you'll have to sight in the rifle, and become familiar with it. You'll have to do this whether it uses a scope or comes with more traditional sights already mounted on the firearm.

Most rifles these days come without any sights. This means you'll have to have a scope. The 30-30 lever action is an exception; offhand can't remember one that doesn't come with what's known as iron sights. That said, the 30-30 is a relatively short ranged round due to its shape,* so it doesn't do well for shots at the distances you'd find out West.

The cheapest rifles will be the bolt and the lever action, though it's very easy to spend a huge chunk of money on each. Remember that the bolt will likely need a scope since it probably won't come with sights, so that adds to the price. Others can offer better advice on the caliber, but .308 or .30-06 is a good all-around round. Note they'll have more recoil than a 30-30.

If you'll be hunting short range, a pump shotgun can be low cost. How short ranged? Essentially bow range. 40 yards would be pushing it. Some places won't allow hunting with buck shot, and the recoil from rifled slugs tend to be on the stiff side. You'll still have to aim a shotgun, though they come with bead sights. You can find one with a slug barrel with sights, but they're short ranged, too, and if you're hunting in that range, a 30-30 will have less recoil.

Again, whatever you use, whether borrowed or bought, you'll have to spend time with it before you go hunting. If your friend will loan you a firearm, you'll be able to determine what's best for your without having to spend a lot of money. Then, if you really like hunting and a type of rifle, you can buy one of your own.

*Hornady makes a round called LEVERevolution, which uses a soft plastic point to improve ballistics. IIRC, it still doesn't compare with a bolt action round, ballistic-wise.

Contributor
+1 to going to the range and shooting a buddy's gun if possible. Once you decide on a rifle and caliber, go to the range and practice off hand shooting. You don't want a hard kicking magnum, white tails are easy to kill with standard calibers if you are able to place the round in the right spot. I'm partial to calibers based on the .308 case, such as .243 Win., 7-08, .260 Remington. Also classics like 6.5 x 55 Swede or 7x 57 Mauser. There are obviously many other viable options.

Moderator
I hadn’t even considered the caliber. I was just thinking of models. Ruger, Remington, Marlin, Henry, etc.

simon1 said:
What type of scattergun do you have for birds? I wub pheasant.
Click to expand...

I use a 12ga, but I am anxious to get a 20 with a full choke. Just another year or two. The only thing better than pheasant is grouse. There's nothing like hearing a grouse rise up out of the pines.

Like so many have said for your area, A Marlin in 30-30, although I prefer the 35 Remington cartridge,probably because that's what dad had. A Marlin in 44 mag would be ok also. The last few years I had been playing with a relative newcomer of a cartridge in some homebuilt AR 15 types, the 6.5 Grendel, and finally got a pretty little bolt action sporter in that caliber, It has even less recoil than the 30-30 and will reach out much further. I have been reading on some forums where folks up north and out west have been using it for elk and moose with success. The 6.5mm bullets seem to perform very well on larger size game as shown by the Swedes with their old military cartridge dating back to the late 1800's.
C

Moderator Emeritus
I'm another in the 30-30 camp. I haven't been hunting in 6 or 7 years, but a Marlin 336 has always been my deer rifle. 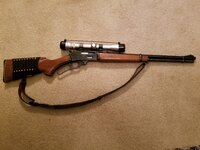 Not to try to influence you any, but these can be picked up new, at your LGS, for less than MSRP. Even less off the used gun rack. They hold up very well so a used one, unless it has been viciously abused, should be fine. Effective range is about 150-200 yards.

Toothpick said:
I hadn’t even considered the caliber. I was just thinking of models. Ruger, Remington, Marlin, Henry, etc.
Click to expand...

Any one of those brands...and Winchester and Savage also...are top notch. Just pick the model and caliber that speaks to you.

Moderator Emeritus
700 is a lot of money to spend on a gun you’re going to use twice a year. I’d either borrow one from your redneck buddy, or get something dual purpose (a used Remington AR bushmaster comes to mind) so you could also do some target shooting. 30-30’s are great rifles, but they’re not all that fun to shoot at the range IMO.