Gentleman, it is given that wet shavers on this forum would rather chinwag about barbershop scented aftershave lotions but I am not averse to try out new scent profiles; especially the ones that are mass produced.
Nivea seems to have launched a new line of products and I came across this aftershave at the local drugstore. For $ 3 am a sucker for adventure and bought a 100ML bottle. This was purported to have been launched in April 2018, so it is a fairly new product. So far only German and Indian websites mention this Deep Impact range.
I have tried a couple of Nivea AS in past and I was not particularly impressed with their generic drugstore scents and never bothered with a second buy. But this one is something else. German website says it is ‘woody and deep’ and our strongest scent yet. I couldn’t agree more, however, it is not as ‘woody’ as the description says.
I don’t have a golden nose and 30+ year of smoking doesn’t help a bit to describe the complex scents but to me this AS is most complex yet from Nivea. Pretty much leaning onto being a Cologne or a mild EDT it opens with a very warm and somewhat sweet scent. Think of JOOP minus the dripping sweetness here and the sweet notes give way to a very solid note of Coumarin with a citral note hanging somewhere in the background. I don’t detect any green or ‘woody’ note but overall combination is slightly sweet, deep and complex scent that has solid legs for an AS and surpasses any other Nivea AS or Balm I have encountered before.

I can see this perfect for someone like me who is alright with a strong scented AS since I don’t use EDTs often. It lasted a good 1 hour not as a barely-there skin scent but with some reasonable projection that is not offending. After 1 hour it became a skin scent and lasted another 2 hours. It has a reasonable bite as an AS but not like Old Spice or Pinauds. Post shave feeling is very nice to my skin however it seems to be a tiny bit sticky on the skin but only in comparison to an alcohol-based AS with just a bit of glycerine. I think it is in between an alcohol AS and a Balm; in a good way.
If you have not enslaved yourself only to barbershop scent AS and find Axe or alike generic scents as tacky, then I recommend this AS. It is complex, not cheap smelling and a very appropriate scent that almost mimics a good EDT of your choice. To me, it smells like a year-round AS but I really see this shining as a slightly heavy and sweet smelling mix of Coumarin and Citral notes that I will gladly use during fall/autumn on way out for a casual dinner and not smell like a guy from 60’s. Rather Long lasting in comparison to many fleeting AS and still not a silage monster. Only Adidas aftershaves beat it (I have many of them) in terms of longevity and scent profiling. But at the price point, it is available, it can’t be beat.

As with any mass produced product it is bound to have some ingredients that might raise eyebrows. Even I would like to know that goes in there. I hope someone with better know of chemicals have a look at the picture and let us all know. 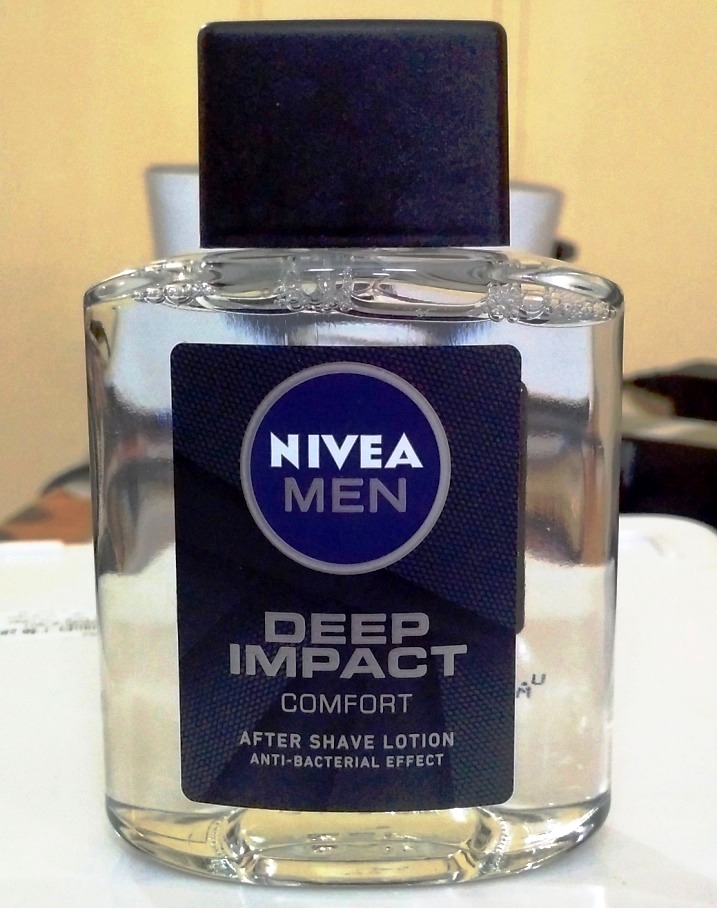 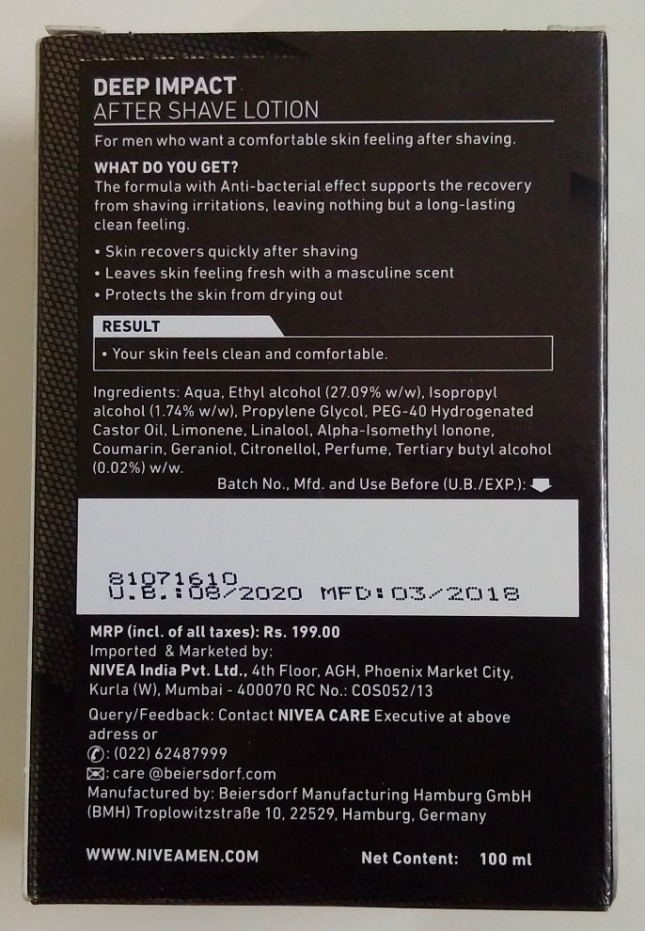 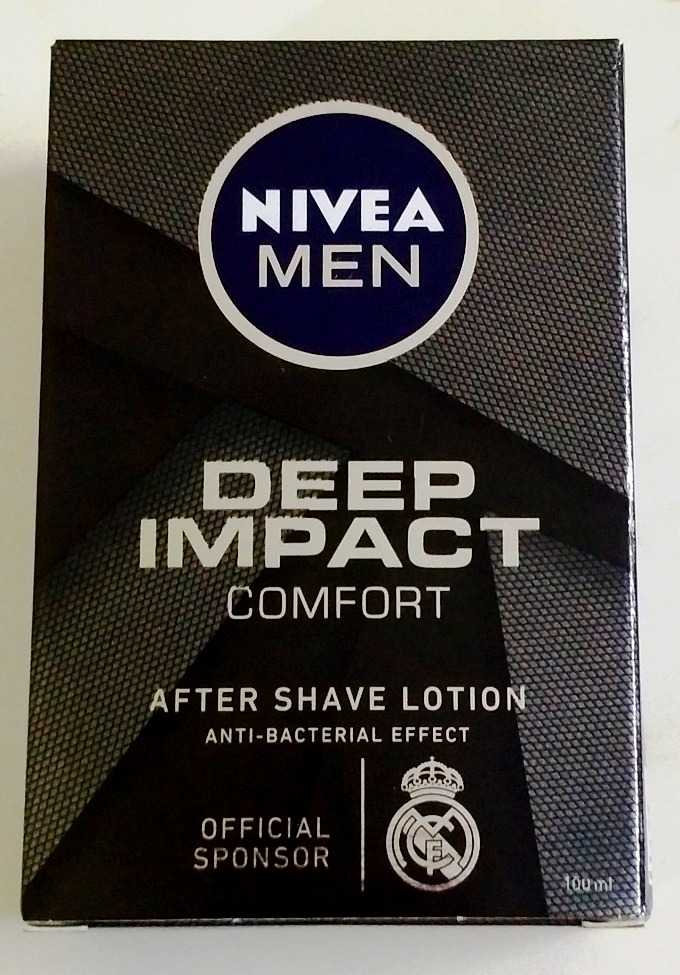 Thank you for the brilliant write up and for letting us know this is out and should be coming to our area soon. I’ve been a huge fan of Nivea Balms for quite some time and their shaving cream is pretty nice too. I’m truly excited to give this one a try, especially because I enjoy aftershaves that have a longer lasting scent. Thank goodness Nivea hasn’t gone the direction of Old Spice and Axe, pretty much everything they make is a sport fragrance or just plain tacky. Keep up the great reviews!

Looks interesting. I'll have to keep an eye out for this one. Thanks for the review!

I have serious doubts this will ever see the shelves of Walgreens or CVS in the states.

Nivea Balms may have boring/fleeting scents but they're great performers. The absence of strong scents is useful on some days.

Thanks for the review and the heads up on the new Nivea lotion as I had not heard about it. I love Nivea products.

Glad to know few members here stand updated about this one and looking forward to try it out. I am using it as much for now since monsoon rains broke out and some days without rain are miserably sweating and muggy. Definitely a cold day AS for me.
Those who might look out for the AS may as well give a spin to the shave foam. It worked nice for me and at par with Nivea regular foam in blue packaging. They have a deo and 3-in-1 bath gel. I haven’t used the Deo yet but the bath Gel was solid for me. In this muggy hot weather I don’t like bath soaps/gels to leave skin oily or too moisturised. Deep Impact bath gel gave me squeaky clean feeling and I actually ran my thumb at upper arm to see if it just slips like a bath after Dove soap. Nope, it just went squeaky screechy. As for the scent, bath gel is bit high on a citrus note though.

If seen, it is getting purchased!

They also offer other products in the range, including a shower gel, anti=perspirant and a shaving foam and gel, the Gel can be purchased in the UK as I made a post about it a while back:

Gary I have shaving foam from Deep Impact range. The foam come out of nozzle in light grayish color and stays same. Am not really a fan of canned goop anymore but this one is more slicker than Nivea Blue I used few years ago. Thanks for the review! I’ll try and watch for it.

The shelves are just being reset for the Men's categories now in the US, but you can find this at some retailers. Best chance is Grocery or Walmart.

I got the di splash from India on eBay.

Just got this the other day at Walmart. I just happened to see it and opened the box to see if it was a Lotion, like it said, or a splash. Yeah, Splash!! I bought two bottles, and have used it twice.

1- My complaint. The hole in the top is tiny, lets out a single drop at a time. I tried popping out the top and once you do, the lid fits too loose. minor complaint, but there it is.

2- The Good. This is nice stuff! Splash, not balm. Feels very moisturizing, yet skin sucks it up and it leaves no oily or greasy feel. Zero sting so if it has alcohol, I can't tell. Scent is nice, very light slight clean smell. I suck with fragrances but I would put it like a very light clean, maybe slight aqua type scent.

Overall, I have been very pleased with Nivea products. Great properties, at a great price. I am looking forward to this hitting the drugstores.
S

I like almost all Nivea aftershaves, except this one. Because of the scent. As a side note this was marketed and also pretty heavily advertised on TV (and still is) in Romania for months and months now. Guess that on other countries Nivea had a different approach. I've tried it several times in stores, thought that maybe I could endear to the scent but no. It is too sweet and to me it does smell cheap. Not Nivea-cheap but obscure aftershaves made of poor quality ingredients cheap. Unpleasant.
If you like an aftershave lotion with the soothing properties of a balm you should try Nivea 2 in 1.
NIVEA MEN PROTECT & CARE 2IN1 REFRESH & CARE AFTER SHAVE
You shake the bottle firmly until the color turns from transparent at the bottom and dark blue at the top to a lighter uniform opaque blue and apply. Cooling sensation and burn from the lotion part with skin moisturizing from the balm part. Very nice.
It is basically the only aftershave that I found that does this.
But Nivea Men Deep...No thanks. The commercials are cool but it's not for me.
Last edited: Feb 12, 2019

Great post. I bought this at Target yesterday for $3.96 (store price), online price is $5.49. Great product. To me it is a slightly sweet, citrusy and woody scent. Just an awesome scent this. Feels great on the skin and no dry feeling afterwards. Just a pleasant experience overall. I have very sensitive skin and this really seems to work for me. Just a little tingly feeling for a few seconds after application..but man this feels real good. I'm a sucker for lotions (not much of a balm guy), especially the Nivea brand. They are very very good product imo. It's sad that retailers don't carry enough of them. I would say half of the Target stores in my area are currently stocked up. Very few Walmart stores carry them.
You must log in or register to reply here.

Davidoff Cool Water - Its Awesome - Have You tried it?
2