Ron R said:
I have a 3D printed TNNSER
Click to expand...

Saturday I used a new from the BST Timeless Bronze SB. Its specs can be found here.


To be truthful, the razor's good looks played a large part in my decision to buy it. Plus, the price was right. Plus, well, it's a Timeless.


In my experience with them, the Polsilver SI and the Wizamet SI (same blade, different packaging) are the perfect blade with any DE razor, including this one as it turns out.

The CH2 has a bit of scritch. It is for the most part what I call good scritch. The CH3 is a much softer knot, and subjectively a lot less dense, and more floppy, and with a lot less backbone, and no scritch. One shave with the CH3 in Best isn't enough but I'm pretty sure it's not in the league with my CH2 in the "same" knot. I like the CH2 in Best. The CH3 in Best is disappointing.

The CH3 would, however, be very likely to appeal to those who like the Simpson Super Badger (if what I've read about the SB is right). I've not tried a Simpson SB, but I tried a Vulfix brush for a while. The Vulfix is made by Simpson (sorta). The brush was in the Vulfix version of Super Badger (three band). That particular knot had some scritch (like my CH2 in Best maybe), but it was also soft. I'm not directly comparing it with my CH2 in Best to say it's exactly the same, but the CH3 in Best reminds me of that Vulfix knot more than it reminds me of my CH2 in Best.

As most of us know, knots vary a lot even within a brand. From what I've read (and now experienced) that may be particularly true of Simpson Best knots.

Perhaps I'll like the CH3 more next time I use it. I hope so. It needs to grow on me.

The Timeless is another story. I was extremely impressed with the razor's first shave.

Make no mistake. This razor is a tank. Heavy! The handle is also fatter than my sweet point. Still, the razor is nicely balanced. It felt very smooth against my skin. Very smooth indeed! It drew no blood. There's a little blade feel but not much at all. The razor drew no blood.

My shaves generally fall into three categories.
Today's shave was definitely in the third category. However it didn't have to be. I got a good shave from category number 2 and then just went further. However, I did not do as much soul patch buffing as I often find necessary; that's a big deal!

Judging largely by the smoothness of my soul patch I'd say this is a darn efficient razor. Judging by the smoothness of the razor on my skin and the fact that there was no blood drawn I'd call it a very comfortable razor (perhaps what some guys mean when they talk about a mild razor). It's certainly not inefficient. It seemed very easy to use, too, which is a plus I think.

One shave ain't a razor review, but these ⬆ are my initial impressions. I like this razor so far. A lot!

Several times yesterday, and during the night, and then this morning I noticed myself looking forward to trying this razor. I never have before experienced that "itch" to use a new razor. Apparently the tool had spoken to my unconscious. Weird, huh?

My wife thinks it's very good looking and heavy. She's right. She also likes the razor's stand and thinks it adds a lot. She's right there, too; she's always right about things like that.


Pleased I am. I have the OC baseplate to try too, and, yes, I realize it's a totally different animal (it's specs are here).

Chan Eil Whiskers said:
Saturday I used a new from the BST Timeless Bronze SB. Its specs can be found here.
Click to expand...

I had both pages open (SB and OC) and copied the wrong one. That doesn't bother me, but it bothers me that I didn't catch my blunder until too late.

Thanks for the correction, and I'm glad it's immediately below my post.

Chan Eil Whiskers said:
Thanks for the correction, and I'm glad it's immediately below my post.
Click to expand...

It was past its editing window when I saw it Jim. So my intention was to be helpful, not cheeky.

Cal said:
It was past its editing window when I saw it Jim. So my intention was to be helpful, not cheeky.

Cal, I've never known you to be anything other than helpful.

When you're cheeky - and these are rare occasions - you're still gentlemanly and good humored and subtle (and helpful).

In my experience on B&B there are very very few snarky people. Yes, an occasional snarky post might slip by someone's internal filter, but it's exceedingly uncommon. My guess is some of what seems snarky is due to across the pond or similar cultural or language variations and/or two carbon fragments.

That said, there are a couple of people whose content I have blocked. Probably I'm too sensitive.

I'm always open to helpful criticism and tend to need a good little bit of it.

Sunday my shave was good.

The B&B system won't let me upload photos so far this morning. This is today's kit, and it's all been recently pictured.
With that gear, my shave was good.

Post shave I used some usual products including as a splash, the Beach. Good stuff.

P.S. I've tried reloading my browser, using a different browser, turning off my VPN, restarting my computer, etc., and everything else I can think of to enable uploading of photos, but nothing works. I assume it's a problem on the B&B end rather than mine.

Chan Eil Whiskers said:
P.S. I've tried reloading my browser, using a different browser, turning off my VPN, restarting my computer, etc., and everything else I can think of to enable uploading of photos, but nothing works. I assume it's a problem on the B&B end rather than mine.
Click to expand...

Thanks for the validation. Much appreciated.

Must be working again (as it usually does).

Tried again to upload (on another thread). Not working again.

Chan Eil Whiskers said:
Must be working again (as it usually does).
Click to expand...

As if by magic.

In other words, I can upload photos (at the moment). Hope it persists.

Monday it was with a sense of adventurous trepidation that I approached my shave. 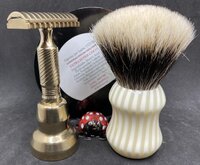 I used today for the first time the Timeless Bronze in its OC configuration which is said to be Timeless's most aggressive razor with the exception of the new Slim in OC (which I used for a week a few months ago). Perhaps the Slim in SB is also more aggressive, but I don't know).

Today's shave involved a new brush, too. The Rudy Vey Zebra Eagle in Shavemac 2 band (not D01). Nice brush by any standard on its first outing. Really good looking, too, in my view of it.

The shave went well. I approached all areas carefully, but all went well. No blood.

Tuesday's shave was good, but not perfect. 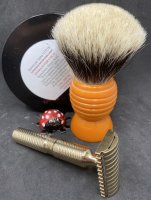 I managed, via a stray movement, to cut my chin (not a big deal), but it was definitely not a shaving move. It does not bother me, but I'm documenting it.

I used the same Wizamet SI blade after flipping it.


I like this bronze Timeless razor pretty well so far. The OC version is nowhere near as difficult as I had feared it might be. It is also not as smooth feeling or easy to use as my FOCS(s). I'm also figuring out whether it is sufficiently more efficient, or significantly more close than shaving than the slants.

Wednesday's shave was quite good. 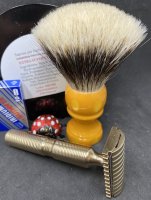 Today's brush is interesting. In the first place it is not mine, but was lent to me by a member who wanted me to try the Oumo mixed knot. Super nice of him as it's very much worth trying. It's a mixed badger/boar knot probably similar to the ones Maggard offers (but I'm not 100% on it being the same).


Compared to my 70/30, the brush I used today is way less scritchy. The handle is not my favorite, as I like larger handles better but it's still a surprisingly nice handle to look at and surprisingly ergonomic. The knot's performance is stellar. It's a lather monster. It has great flow-through. It rinses easily. It's not a huge knot (I think its nominal size is 24 mm) but it performs like a much larger knot perhaps due to it's relatively flat-top fan shape.

My 70/30 bulb is also set lower I think (I didn't measure), and this knot may be set just a tad high for some people. It's exactly right for me though in its loft. I can't find anything not to like about the knot's performance or feel.

It measures 27 mm as it exits the handle.

My favorite shape is generally a kinda sorta fan or maybe a fan more like a hybrid than a flat-top or bulb. I don't love the flat-top look but in real life this brush is less perfectly acceptable visually. It is less flat-top looking in person, and, boy, does this knot perform. Is it 50/50 or 70/30 or what? I have no idea, except that it is mixed badger/boar.

Is it scrubby? My highest category of scrub is what I call deliciously scrubby. This knot falls into that category for sure. I like the scrub very very much.

I'd say the knot compares very well in its performance with the Semogue SOC Mistura. That's high praise indeed. It might even be better but I'd have to try both a lot more to really say that. Both are great knots.

For the first time, I used the Timeless Bronze with a brand new blade. No problems at all. There is some blade feel with the OC baseplate but not all that much, certainly not an objectionable amount. I am proceeding pretty carefully with the OC version of this razor, but finding it far less of a beast that some gentlemen reporting on it. I like the razor.

Chan Eil Whiskers said:
Today's brush is interesting. In the first place it is not mine, but was lent to me by a member who wanted me to try the Oumo mixed knot. Super nice of him as it's very much worth trying. It's a mixed badger/boar knot probably similar to the ones Maggard offers (but I'm not 100% on it being the same).
Click to expand...

Is that the reason we're not allowed to see it?

B
New rookie on the block
2