Just about ready to bottle some crabapple wine that I made from our own tree. Harvested in 2015. Ended up about 15% ABV. Really nice flavor profile. It does need some sugar added to counter the tartness - I think I'll do a few bottles of off-dry wine and a few smaller bottles of dessert wine.

Such a treat for a former-farm-boy-turned-suburbanite to harvest something off his own land and turn it into something special.

Very cool. I suppose I should consider some pear wine for the ones in our back yard.

So I'm interested in what was the process given the date of harvest to now being "just about ready to bottle" oak?

I've made cider in the past but never wine although the cider I made was probably closer to wine. 'Dry? I hear you ask?' You could feel the humidity drop every time I opened a bottle!

@newo: the process was sheer laziness.

It's just been sitting in the fermenter all this time, and I finally am dealing with it because I need the fermenter to make some strawberry wine from this year's bumper crop. Actually, I was afraid that it would taste terrible because of the neglect, so I was pleasantly surprised to find it so nice.

I actually made a larger batch and let it ferment out to about 6%. Then I took off some of this to bottle cider and added sugar to the rest of it to get the ABV higher for a wine. The cider was nice and crisp, but I think I probably should have sweetened it a little more.

bobmsp said:
Very cool. I suppose I should consider some pear wine for the ones in our back yard.
Click to expand...

You should! I don't know if you've ever done it before, but it really isn't difficult. I see you're a Minnesota boy too. If you live near the Twin Cities, Northern Brewer has a couple stores with everything you would need (and plenty you wouldn't!).

I live right near the NB store in St. Paul. I used to frequent them when I brewed (pre-kids) so I have carboys, pails, etc. already.

Moderator Emeritus
Hmmm. Frequently make jelly from our crab apples, several jars still on the pantry. May have to try wine this year.

bberg100 said:
Hmmm. Frequently make jelly from our crab apples, several jars still on the pantry. May have to try wine this year.
Click to expand...

Oh, the jelly is divine. We made an insane amount of that that year too. If you have to choose, make the jelly. But hopefully you have enough for both. 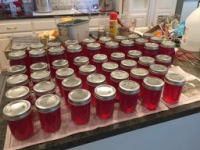 bobmsp said:
I live right near the NB store in St. Paul. I used to frequent them when I brewed (pre-kids) so I have carboys, pails, etc. already.
Click to expand...

You, sir, have no excuse!

docholliday77 said:
You, sir, have no excuse!
Click to expand...

docholliday77 said:
@newo: the process was sheer laziness. It's just been sitting in the fermenter all this time, and I finally am dealing with it because I need the fermenter to make some strawberry wine from this year's bumper crop. Actually, I was afraid that it would taste terrible because of the neglect, so I was pleasantly surprised to find it so nice.
Click to expand...

Wow and it didn't turn into vinegar?

Forgive me but I'm going to barrage you with questions as my brother has half a dozen crab apple trees;

How do you scrat and extract the juice

When you make cider do you stop the fermentation (eg campden tablet) and then force carbonate or let it run out till the SG is stable and then bottle carbonate? I have had some disasters attempting to keep it sweet(ish) for my wife and still bubbly...

Nope, no vinegar. I wasn't all that worried about that because it's been under airlock all this time, and I'm scrupulously clean when dealing with it. It can still happen, but it hasn't happened to me yet.

What I was worried about was it being on the lees (dead yeast) all this time. It should have been racked into a new carboy long ago. When you leave it on the lees, it can acquire yucko tastes. I essentially performed the primary and secondary fermentations in the primary fermenter.

PROCESS:
- first of all, I have ornamental crab trees. One is really ornamental (1 cm fruit) and is worthless except for it's pretty pink blossoms. The other one produces fruit that is small (~2.5 - 3 cm), but big enough to work with and it contains a fair amount of juice and a lot of flavor. It would probably produce somewhat bigger fruit if I thinned the blossoms.
- Because the fruit is small, I keep it simple. To make jelly, I just cut off the tops and bottoms. I usually cut it in half, but I'm thinking of even skipping that step. Then I boil it with water and let it drip through a jelly bag. For wine and cider I juice it. I run them (whole) through an attachment for my stand mixer. It's probably intended to make fancy shredded vegetables. A food processor would probably work too.
- I have a press that I run this pulp through. This gets pasteurized to 161 F for 15 seconds (same process for milk pasteurization). I do this on a stock pot on the stove with a candy thermometer. This kills the wild yeasts. I sweeten some of this and we drink it fresh. Really nice with club soda.
- I started with 4 gallons of this juice in my primary fermenter and added winemaking yeast. I didn't add any sugar to start with. I did use pectinase enzyme, because apples have LOTS of pectin, and I didn't want to end up with alcoholic jelly. When it was no longer bubbling much, I took out 2 gallons as hard cider. I then added sugar to what was left (several times) to get the ABV up to wine territory. The cider came out about 6.7%, it it got diluted to just under 6 by the time I bottled it (sweetening, etc).

CIDER SWEETENING & CARBONATION (or not):
- you have to sweeten this stuff - it's just too tart for anyone I know otherwise. If you were using a few crabapples in a batch of regular hard apple cider, that would be one thing. But I was using ALL crabapples.
- the easiest option is to keep it flat and permanently stabilize it (potassium sorbate or potassium metabisulfite) and sweeten with your choice of sweetener. You can also use an artificial sweetener and then you don't have to stabilize it (yeast can't use that stuff).
- the second easiest option is to sweeten with artificial sweetener to taste and then use corn sugar and champagne yeast to naturally carbonate it in the bottle. Make sure you do the math correctly and keep the bottles in a heavy cardboard box to catch any accidental bombs.
- if you have the equipment to force carbonate, that option doesn't require calculations or heavy cardboard boxes. You won't have elegant, tiny, champagne-style bubbles though.
- the (probably crazy) thing I attempted to do was to sweeten with natural sweetener AND naturally carbonate it. This is guaranteed to result in bottle explosions if you don't stop the yeast from eating all the corn sugar plus your sweetener. You do this by pasteurizing the whole bottles when they're ready. You figure that out by opening bottles on successive days to evaluate the pressure/fizz. Why would I do such a thing? Well, I wanted to use frozen apple juice concentrate as my sweetener. The thing about the whole process of fermenting is that you can lose some of the original flavor (the joke is on me, as I'm finding that my wine has BIG apple flavor). It backfired on me though: I didn't realize that the store-bought apple juice concentrate had potassium sorbate in it. I added yeast several times and it never did anything. So I had flat (but delicious) hard cider. 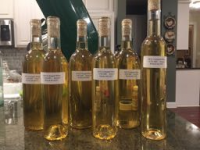 Moderator Emeritus
If Boone's Farm® doesn't carry a crabapple wine, they should.

Pasteurisation - now why didn't I think of that

That is definitely what I'm going to try next. I'll scrat a batch and split it, pasteurise half then add the cider yeast the other half will get a natural fermentation, rack to secondary/s, back sweeten with fresh apple and sugar for priming, naturally bottle carbonate then pasteurise again to stop the bottles over pressurising and turning into grenades.

This will be fun! Now to just find the time...

Some people like to follow a pasteurization scheme that allows a lower temperature, the idea being that it tastes less "cooked." However, I don't find the taste suffers at 161 F, and the key is that you only have to hold the temp there for 15 seconds. The lower temp schemes are a half hour of babysitting the thermometer.

As to pasteurizing the carbonated bottles, you'll have to look online for a recommended time. This is a little trickier, because the temperature of the water bath (where your thermometer is) does not equal the temperature inside the bottles. I found a procedure online, but don't remember it now (since I never actually did it). Also, my strong suggestion to you: wear full-surround chemist's eye goggles (not just tool-work eye protection) and a heavy winter coat and pants, just in case one of them blows while you're doing the pasteurization.

Sorry to hit you with so much detail in my description, @newo. After I typed it up, I realized you mentioned that you already know how to make wine, and I decided to keep the detail for anyone else interested.

No no, don't be sorry the more detail the better

I have chemical goggles with face shield for protection. My philosophy being you only ever get given one pair of eyes but you can have as many pairs of eye protection that you want. The other PPE will be worn as well.

I'll pre-warm the bottles to reduce the risk of thermal shock before immersing them. It will take a little experimentation but I should be able to judge it by having an open bottle in there that I can place a thermometer into (probe type in a pieced cork/rubber stopper). I'll then alter the pasteurisation times from 15 seconds to several minutes and different temps (handbook of food preservation second ed. table 23.1, beer, 65/150 20 min or 72/161 for 1 - 4 min) to see what works best

Palm Springs Brewery
Tests carried out with infected beer at 1.8 million cells/ml. prior to flash pasteurization. Using a 73(C and 20 seconds hold time (25 P.U.) yielded final cell counts of 6 aerobic cells/ml., <1 lactobacilli/ml. and <1 anaerobic/ml. after flash pasteurization. The brewery typically uses 71.5 to 72ºC and 20 seconds for their bottle and keg beer production.

Nice!
You must log in or register to reply here.

Scotch bucket list: 15 bottles you need to try at least once

7 new beers you should know