We will have random.org draw three winners from those entered. This is CONUS only please due to the prizes. Each winner gets to select TWO of our popular aftershaves. Pictured are two that were just released. It is very likely that The Captain will squeeze in another item or two as well so get ready for it to feel like Christmas in April!

Read more about our popular aftershaves by clicking right here. We will let this run a few days and then announce who random.org has selected. Come one, come all! Whether you are a moderator, a contributor, an old hand, or new to B&B - join in!

Here is how you enter:

It has been said that the doors of history pivot on small hinges. Reflect back on your life and tell us the story of a turning point in your life. Often a turning point is only evident years later looking back on it but not always. It does not have to be dramatic to be life changing. It can be an instance of a decision you made; a person who said or did something; a job loss that ended up being a blessing; etc.

Contributor
We decided to watch a church service online in Toronto last summer the weekend we were supposed to be in Toronto before COVID hit.

It led to a discussion about moving to Canada and now my wife is in PEI and w are just waiting for my work permit to clear.

Contributor
I'm in please There have been a few pivotal turning points for me. The most immediate that come to mind are when I happened to meet the woman who would become my wife in November 1999. The short version is my sister and bro-in-law were friends with her and her family and decided we should meet. Another was when I decided to make a career change in early 2006, which would not have happened without influence from my wife. And then another in 2012 was stumbling across an opportunity that involved moving to another city which we never would have envisioned, kind of like @MyOldKentuckyHome mentions above

At a summer job packing boxes in a warehouse one summer, the foreman (who was born in Jamaica) listed the countries where he lived during his life. I asked him why he lived in so many countries. He answered, in his beautiful accent,

"I go to see what the other man look like, and why he look that way."

It became a guiding principle to high school me.

Contributor
Ambassador
Not in, but what a great contest! Congrats on the new scents, Scott!

I’m in.
There have been lots of them, the most recent is that I retired 2 weeks ago. I don’t know what that will bring, but it is definitely going to change my life. So far, the afternoon naps are great

I’m in. The most pivotal point in my life was when I met my wife. We just had our second child a week ago and couldn’t imagine my life any other way.

I'm in! The most pivotal moment of my life thus far was our decision to have our first child. He's turning one next month and I cannot imagine our lives without him now.
G

MyOldKentuckyHome said:
We decided to watch a church service online in Toronto last summer the weekend we were supposed to be in Toronto before COVID hit.

It led to a discussion about moving to Canada and now my wife is in PEI and w are just waiting for my work permit to clear.
Click to expand...

Congrats! I grew up in Toronto, but no longer live there. Miss it dearly. The pandemic's made it impossible to get home this past year to visit. Things are getting rough there now (hospital ICUs are nearing capacity from what I hear). Hopefully the city manages to get through this current wave relatively quickly. And then if we're lucky maybe it won't be too long before we can all safely travel again -- you can get that trip in, and I can finally make it home.

I'm in. I moved to the US a number of years ago to pursue a new career (school plus professional training). I'm definitely glad I did, but it was a challenge to uproot myself like that and move to a place that on the surface seems like it should be familiar but feels very different once you live there. It's the little things. To this day, I still have no clue how to interpret weather when the locals read me the temperature in Fahrenheit. And finding a decent bagel is near impossible.

It was my first month of college; I'd just finished playing some pickup basketball at the gym. As I walked back toward the exit, I passed by a workout room and saw some someone jump in the air and do spin kicks. I approached the room and grabbed a seat as I watched other people rolling around on the mats in funny white robes.

A couple minutes later, one of the participants approached me and asked me if he could be of help. I asked him what this was and he explained that it was a hapkido class practice. I asked him what hapkido was and he went in to explain to me that it was a self-defense oriented martial art that was a combination of aikido, traditional taekwondo, and judo. He then gave me the class schedule and invited me to join the next class.

That was how I wound up studying martial arts for the four years I was in college, and for many more years afterward. In fact, although I majored in history, one of my college friends used to day that my true major was martial arts. I spent 20+ hours a week training in hapkido, judo, and escrima. I spent even more time reading about various martial arts.

Incidentally, this was also the first time I learned how easily I could develop an addiction to a hobby. The latest reminder of this is in my relatively new wet shaving hobby.

so many... the moment I met my wife... the birth of our children.... the marriage of our son .. retirement... each contributed in their own way

Trem said:
To this day, I still have no clue how to interpret weather when the locals read me the temperature in Fahrenheit. And finding a decent bagel is near impossible.
Click to expand...

Subtract 32 then multiply the answer by 5/9. My mom made me memorize the formula for converting from C to F (and back) when I was in elementary school.

Contributor
I'm in. My favorite story of a simple change of perspective is my junior year in High School. I was going to play the romantic lead in Arsenic and Old Lace and I was anxious to date my leading lady. So I chose a desk next to her best friend in my economics class, hoping to get my leading lady's good graces by being part of the friend zone first. I became such good friends with my desk mate that I ended up asking her out, falling completely head over heals and marrying her after college. We just celebrated our 41st anniversary of our first date (cheap movie, ice cream, and lots of walking). I can't imagine my life without her, and I can't imagine what would have happened had I succeeded with her friend. I'm glad that plan failed.

emwolf said:
Arsenic and Old Lace and I was anxious to date my leading lady.
Click to expand...

Im in.
Probably the biggest turning point for me so far was when I joined the military a few years ago. It allowed to me grow into a more responsible person which I really needed at the time. As time goes on I suspect I’ll be able to look back with even more of a clear head and see how it’s effected me even more big picture. Thank you for the opportunity in this PIF!
G

I’m in.
The most pivotal/hinge in my life was a picture.
After trying everything...My wife and I decided to adopt a child from Korea (my wife is half Korean).
We were matched with a “special needs” baby girl. She was classified as “special needs” because she was interracial. The day we saw her picture, my wife was too scared/emotional to look at it right away. She asked me what she looks like (and wiping sand/debris out of my eyes...why else would they be watery/dripping), I said she looks like our little girl. 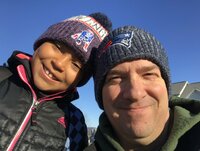 That picture changed my life! And I’m a better man for having received that picture.
And so a family was born...
X

I'm in. Lived up north , was mid March and I was speaking with a buddy...I said: I just can't take this horrible cold any more.... He said: you are a looser, find yourself a job here in my town (South central).....; I hang up, went online, saw who was the Boss at one of the best places in that city, I knew him, sent and email and by the time I woke up....there was a positive answer...I moved south and changed the cold for heat , humidity and rain.....

hairless wonder said:
Subtract 32 then multiply the answer by 5/9. My mom made me memorize the formula for converting from C to F (and back) when I was in elementary school.
Click to expand...