Colorado got its first In-N-Out locations, and the lines are 14 hours long! Say What???

"Customers were waiting 14 hours to order at a new In-N-Out Burger outside of Denver on Friday, as Colorado got its first two locations of the Southern California fast food institution.

The burger craze at the location in Aurora forced officers to direct traffic, which the police department described on Twitter as “double double animal style,” KTLA sister station KDVR reported.

The Aurora In-N-Out is one of two that opened in the state Friday, with the other in Colorado Springs. That location was slammed too, with the first customer having gotten in line on Tuesday, according to a journalist at a local paper.

@AuroraPD - Nov 20, 2020
It’s official, traffic is double double animal style right now all around the mall. We are on hand helping manage the massive traffic response. Be patient and be kind. Maybe support another local eatery today and In-n-Out another day if traffic is too hectic for you. 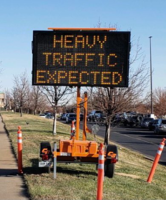 Update: IN-n-Out burger is now at a TWELVE HOUR WAIT. I repeat TWELVE HOURS. Traffic is still significantly impacted in the area surrounding the mall. They will close before you get to the window most likely. Meanwhile many other local eateries do not have a wait hint hint.

“They will close before you get to the window most likely,” officers warned via Twitter.

Police encouraged people to support local restaurants that have no wait times.

“Maybe support another local eatery today and In-n-Out another day if traffic is too hectic for you,” the Aurora Police Department said.

In-N-Out plans to open a total of at least nine restaurants across Colorado".

"In-N-Out, In-N-Out. That's what a hamburger's all about." In-N-Out Burger Slogan

I lived in SoCal for over ten years (my wife is CA native). She to this day thinks that I'm nuts for not liking In-N-Out burger. IMO, there are MUCH better burgers in Cali. I ate In-N-Out many times (because of her), but I was not impressed to say the least. AFA "14 hour wait".....if I would have terminal cancer, and they were giving 100% sure cure for free, I would not wait in line for it.

I have a home there and lived there for 4 years, then California. I don't get it, other than the tons of military in the Springs.

I’m a huge In-N-Out fan and I live about 5 miles from the COS location; however, I may give it a year to cool down before I go. Totally insane.

I have no idea what In-n-out is but there is no fast food or take out food that I would choose over anything home cooked by my wife. Fast food or take out, to me at least, is not a treat, in fact it is the opposite, it is what you have when you cannot for whatever reason eat home cooked proper food. I would not queue for it for 14 minutes. To each their own I suppose.

I heard the IN-N-Out hype and I went there when I was LA for training. I was totally unimpressed. Bland food. I assume people who love that chain have never eaten at a Whataburger.
W

Absolutely agree,.....except in my household I am the one doing all the cooking!

Pretty good burgers, fries and shakes but not worth a wait.

They do treat their employees very well.

Moderator
Their fries are good - but for me the best chain burgers are from Whataburger.

Then again, it's not like there's much else to do at the moment.

We have em at home in SLC, not a fan.

However, I’m not ashamed to say I’ve waited in line for over an hour for White Castle.

Glad I missed it.
I had them when I lived in Orange bounty.
They are good burgers but not worth a 14 hour wait.
Frankly, there are better burgers in Iowa, Nebraska, and Kansas. Most people fly over them; so how would they know?

Pandemic ‘over-load’ for burger lovers...queuing for 14hrs (no matter how great the burger),...I think not, but being
a 'equal opportunity' carnivore...hmmm.

"Quality you can taste". In and Out Burger Slogan

They are good burgers for what they are, mass-production fast food. Quality ingredients, great fries. Double-double animal style, please. But I don't like to wait in line for anything.

Wolfgang von Kessler said:
...if I would have terminal cancer, and they were giving 100% sure cure for free, I would not wait in line for it.
Click to expand...

But they are good at using the interwebs to drum up bidness .. though the food basically is like every other burger joint, save more expensive as I recall. All derivative of the little non-chained joints that have been wiped out by the race to sameness ..

I wouldn't hit a dog in the behind with anyone who'd stand in a 14 mile line for a greaseburger, at a mall no less

The same thing happened in Tulsa when we got our first Crispy Cream. The line was 1 mile long, and I have no idea about the wait. After a few months, the novelty wore off and the lines are either non existent or run to the end of the restaurant.