Sat 6 Blade Challenge 4th round
Soap Barrister & Mann Vespers
Brush Yaqi 22mm Joy Butterscotch Boar
Razor Gillette Single Ring
Blade JAWS Platinum 4th - wow!
Aftershave B&M Vespers Balm
Outstanding soap...for the rich creamy slick lather and the beautiful scent...together with the matching balm...wow, I am loving this scent more than ever...!!!
This shave with my oldest DE razor paired perfectly with the blade was absolutely flawless. Very enjoyable 3passes without issues for a bbs finish. Awesome! I thought the blade would not be performing by now...surprised!! 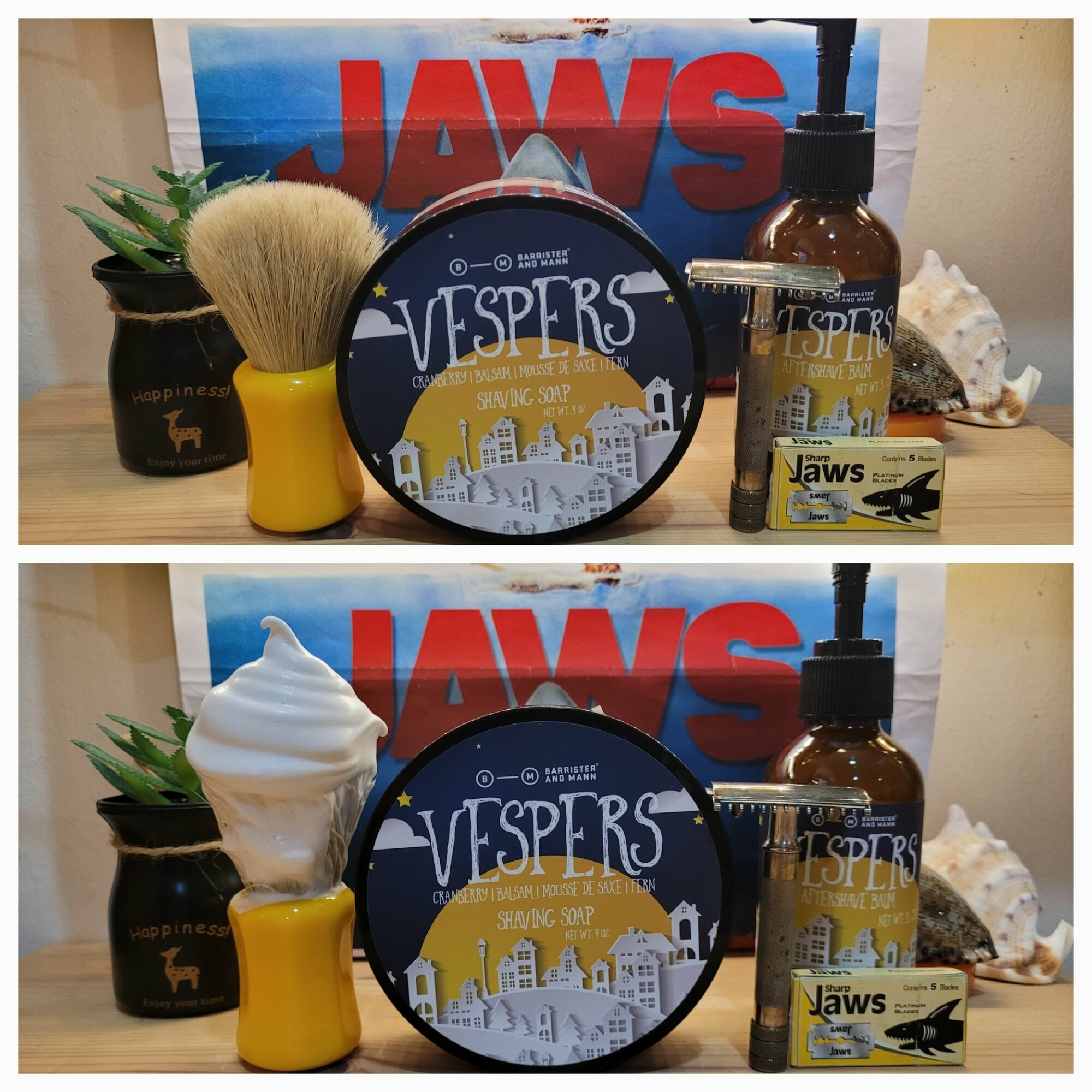 Having to play catch-up on the Shark updates. I believe my last unpleasant Shark Platinum shave with the Cremo cream was not a fluke. I had the next shave with ShArko as I had before and it was also unpleasant. The blade was very tuggy WTG but ATG didn't feel bad. The results were not bad, but it just wasn't a nice shave.

So that Shark Platinum went 4 or 5 shaves. The first was weird but not bad. The second was good. There was a very noticeable degradation after that. I probably would not buy a bunch of these blades, but one blade in one razor is not a final decision... for the price I might buy a 100 anyways. I'm weak like that RBAD!

This morning I switched to the Jaws blade. Same setup - Slim adjustable on 5 and ShArko. Shave after a shower but I was in a little bit of a hurry. Not a bad start, but too early to make any decisions. I definitely missed a spot around my lip and it bugged me all day.

I didn't have much time this week, so shaves 1 and 2 setups were identical. The results were pretty much identical as well. This nice sharp blade plowed right through the stubble with no problem. 3 passes made me Baby Seal Smooth with no drama. I figured as much. I had a tuck of Shark SS a year or two ago and liked them and the SCS razor preformed well with the Shark Platinum previously.

I know I'm on the verge of cheating Arko August with these Arko creams, but they are good. In fact, there's so much glycerin in them that I skip any aftershave because it's not needed. The comfort has a sort of cologne/soap scent. I definitely would wear it as an aftershave. 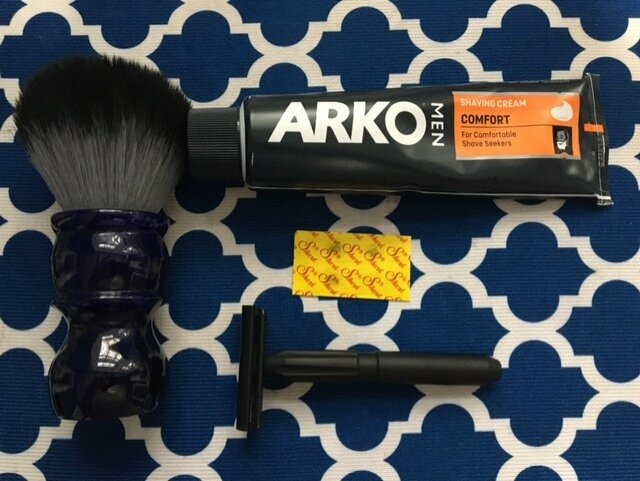 My first use of a Shark platinum blade. Very nice and comfortable 2-pass shave consistent with my previous Shark blade. The only red was found on the painted tip of the razor.

Have a beautiful Saturday, friends. This blade is headed to Davey Jones locker, as it seems to have lost its mojo. After a completely unsatisfactory outing, last Wednesday, I was dithering about whether to give this blade another chance or not. Well, I'm glad that I did because it has come back from the dead to provide the best shave I've had all week!

All three of my main passes were smooth and comfortable. The tugging that I experienced on the WTG and XTG passes was barely perceptible, this time. Meanwhile, the ATG pass was as smooth as silk.

When it came time to buff, I only needed a few strokes around the Adam's apple and along my left jawline to complete a nearly effortless BBS.

So, it now falls to the Jaws blade to resurrect itself like the Shark SS and Shark Platinum did. Will it again deliver the kind of close, comfortable shave that I've come to expect from it. Or will the Jaws break that streak?

Thank you to @dmshaver for the Proraso green today! Very different scent from the Southern Witchcraft Samhain yesterday for sure, but I loved this one as well - the menthol and eucalyptus was perfect for this hot day! (And we have a lot more of those to come here in Florida!)

This was my first time loading soap from a tub, so I actually had to look up the Marco Method. Definitely some room for improvement for me with that skill. I don’t know if synthetic brushes don’t drip as much as badgers and boars when held upside down, but this was the first time I’ve ever had my lather be too runny. I don’t think it’s because I didn’t load enough soap, there was plenty of lather, just too much water.

With a shave behind it to smooth out the coating, the Shark wasn't so tuggy today. It probably also helped that I had just over a day's worth of stubble following a nice close shave yesterday. I still ended up with a close shave, though not as close as yesterday. But weepers and even more alum feedback foreshadowed some irritated skin. I'm looking forward to trying this setup again next weekend though, see if I can improve my lathering skills and maybe get a better shave out of this Shark.

Facial wounds: lots n lotsa weepers (but all closed before or with the cold rinse and alum)

Limbs chomped off by huge hungry fish with big teeth: 0 Today I'm back to the stinky stick. It's not as good of a shark repellant as Tabac, but it kept the biting at bay. 3 passes has me Baby Seal Smooth with no drama. This is what a shave should be like. 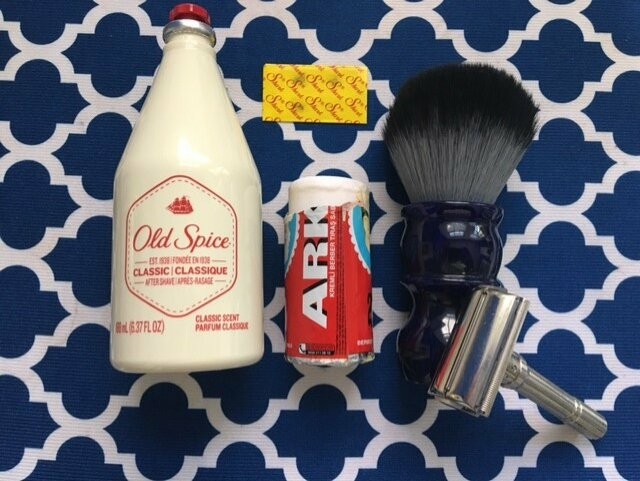 No Blood in the water on this outing. Overall, a pretty good shave, drama free, DFS after 2 passes, BBS after 3 plus some touch up.

The answer is: No.

After a pretty bad shave with the Jaws, last Thursday, I pondered whether it would experience some kind of renaissance like the Shark SS and Shark Platinum did after their respective bad outings. Well, the answer is: No.

To recap, the Jaws blade had experienced declines in every aspect of performance from smoothness to comfort to efficiency. Although it did recover slightly in all of those areas, it wasn't a great shave, by any means. I'd call it passable.

The tugging that I felt on all of my main passes was reduced. Part of that may have been due to the extra-slick lather that the Fine Classic/RR SMdF combo managed to generate. Also, I really focused on my technique and I think that paid off, as well.

Eventually, I was able to buff my way to a DFS. It took much more buffing than previously and I decided to quit when I began to feel some tingling on my skin. In the end, I had some slight post-shave irritation.

Overall, this was only an average shave and it appears that the Jaws blade has finally kicked the bucket.

Therefore, I'll be concentrating on the Shark SS and Platinum blades from here on out. At the start of the Challenge, I never would have pegged either of those blades as lasting longer than the Jaws. Will wonders never cease?

Although I was very happy with shave #1 on the edge, it turned out to be a little short-lived, just like shave 1 on the first edge. I'm reporting today's shave much later, and it's lasted much longer just like shave 2 of the first edge - I don't think I've ever noticed this with any other blades.

I seem to recall shave 3 was kinda short-lived too, so I'm preparing myself for disappointment on Tuesday!
L

The sharks were circling during today's shave.

Had the Sharks loaded into the razors.
Loaded the Yaqi with St. James black pepper and lime sample. Thought I had a decent lather, the lather dried out during the shave and I had to keep reapplying.
Finished off with the alum, styptic and St. James lavender and geranium. The scent was nice at first then the geranium kicked in and it smelled more of a perfume then an aftershave.

Had several opened wounds, most were stopped by the alum one needed the styptic. The sharks were nearly in a frenzy but I finished and Martin Brody got me out of the water just in time.

I need to get better at pictures but I seem to get started getting my gear together and just get on with what I am doing.

After The Challenge PIF - PIF!!​
Thank You, @AnimalCatcher and @Chard52142, for making this PIF fun filled with good blades!!
Thank you, @BigJ, for hosting Shark Week 2022!!

Special thanks goes to @AnimalCatcher who included the Shark Stickers and Shark Stamps...AND...3 amazing After The PIF PIF Prizes!! 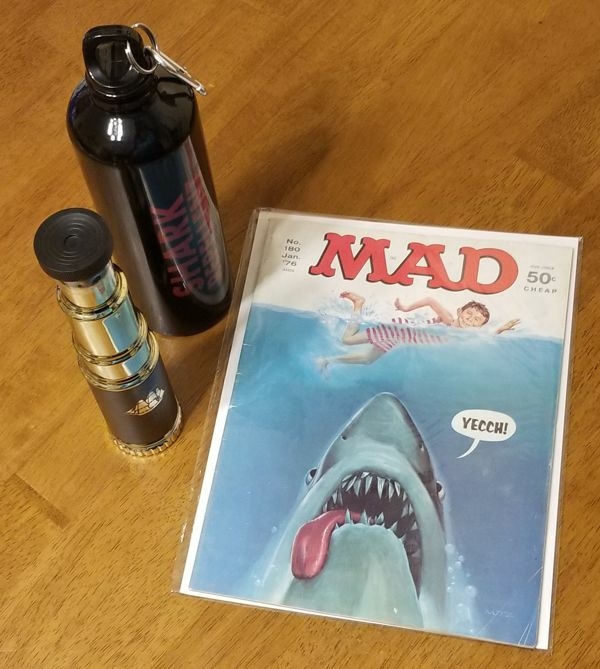 3 Lucky Survivors were selected at pickerwheel.com (after removing @AnimalCatcher, @Chard52142, and myself from consideration) to receive their choice of the above prizes!!

The Winners are:
After @fast shaver makes his choice, @Tathlum chooses next, then @Tanuki receives the remaining prizes!!

Second outing with the Platinum blade on face and dome using a reliable two-pass razor. Face was fine in two passes with usual pickup needed at jawline. Two passes on the dome required more touch ups. Blade may be running out of gas after 4 shaves. Nevertheless, comfortable BBS tonight. Holy Spitz! I'm out of the water, bronzed by the pickerwheel, and on the podium! Even better, I don't have to make any decisions!

Thanks again @AnimalCatcher @Grundi and @Chard52142 , swimming among the Sharks' gaping Jaws for a Week or two was terror-ific. And I have two pristine blades preserved for 2023.

Thanks.! Guess I will go for the Nautical Monoscope aftershave.

Last edited: Sunday at 8:26 PM
You must log in or register to reply here.