Challenge PIF - Shave For The Stars All aspects of today's outing were fantastic!

The FOCS/Sharp Star combo was superb, today, as I enjoyed an extremely quick and easy autopilot shave. Frankly, I'm astonished by how quickly it was over. In no time at all, my face was Baby Butt Smooth and surprisingly refreshed. This is profoundly gratifying considering the abuse that my face took from the Silver Stars previously!

I've mentioned before that this blade glides well over my skin and feels very efficient to me. Therefore, I don't have to spend as much time scraping away at my beard. Most importantly, it helps to minimize how much buffing I need to do to get to the closeness that I prefer. This definitely increases the overall comfort level (which was top-notch, today).

Meanwhile, the performance of the Yaqi Aqua Tuxedo/PdP B&T duo was far superior to that of yesterday's brush/soap pairing. This undoubtedly played a major role in today's outstanding outcome. In my opinion, it would be hard to improve on this shave. So, if I was scoring my shaves, I'd have to give this a 10 out of 10. 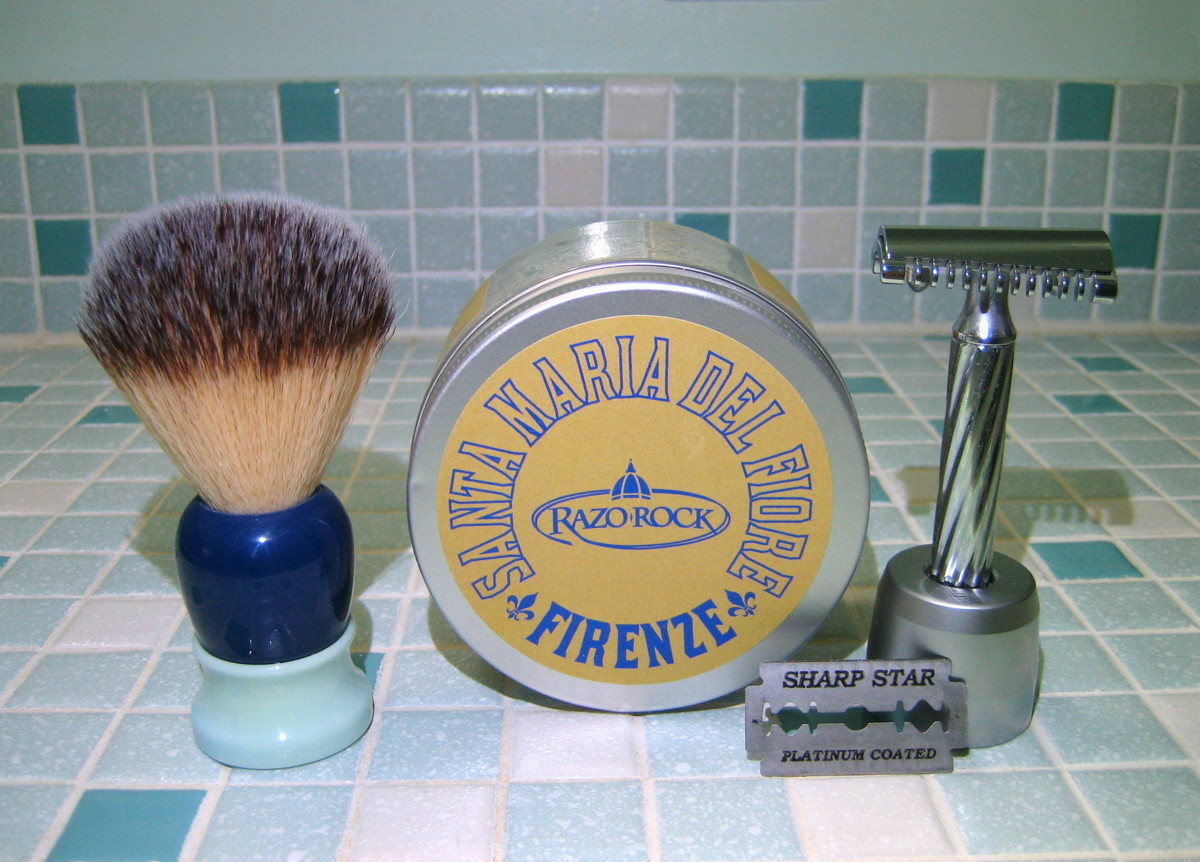 A nice, relaxing shave on a lazy Sunday.

Since I'm only going to sit around the house and watch Masters Golf, I decided to perform just the bare minimum of shaves, today. That meant my three usual passes, but no buffing or touchups.

In the end, I received a quick, trouble-free DFS. I wouldn't have an issue going out in public with this level of closeness. Also, not striving for an even closer shave allows my skin to recover more quickly from the abuse that it suffered from the Silver Stars the previous week.

It's back to the grind, tomorrow, though. Therefore, we'll see if the Sharp Star can ramp up its performance once again. 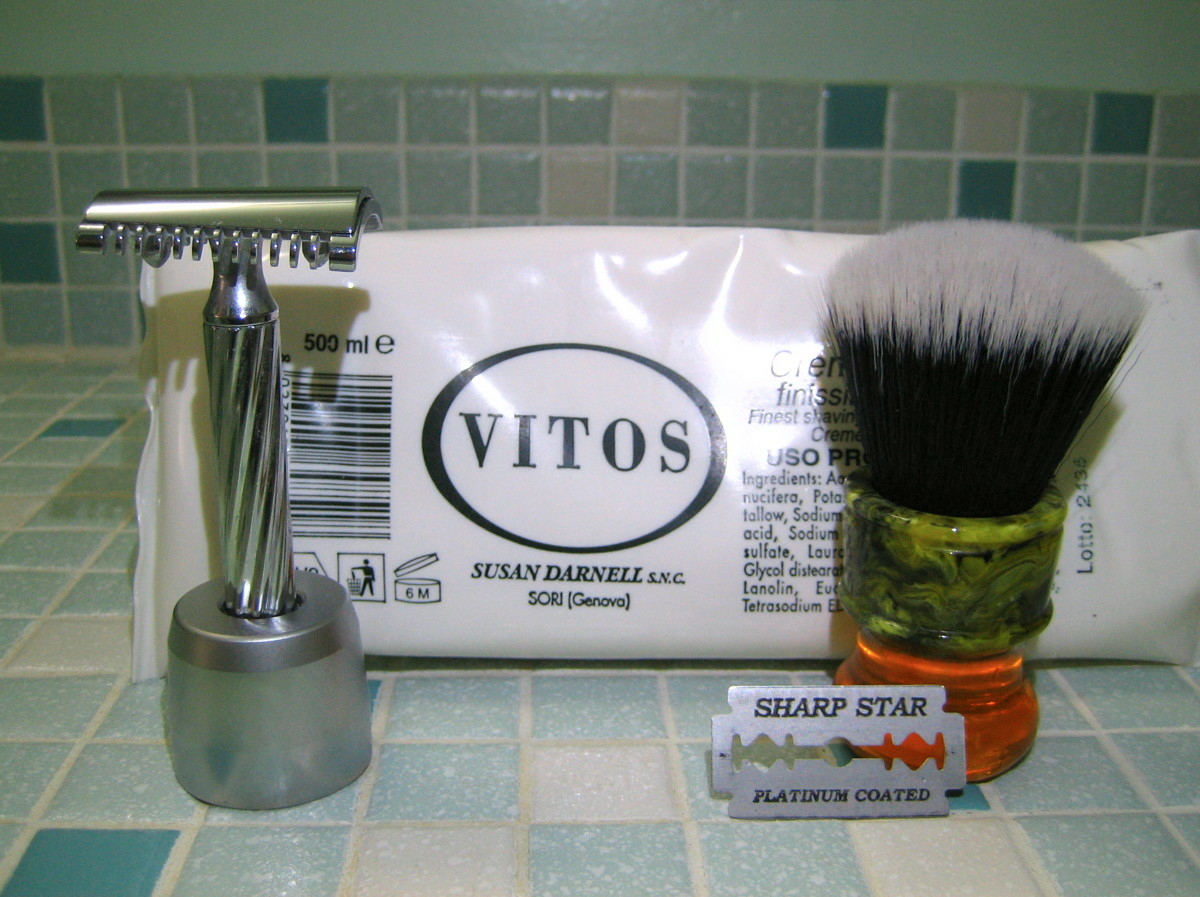 Another excellent shave from the Sharp Star.

This morning, I had a slightly heavier beard than normal after taking it easy, yesterday. But, the FOCS/Sharp Star duo mowed it down without issue.

My three usual passes were all very quick and comfortable. Efficiency is still top-notch as I barely needed to buff to get to a BBS. Overall, a great shave!

Meanwhile, the Yaqi Sagrada Familia Tuxedo Fan/Vitos Classic pairing was superb. I suspect that the rich, slick lather was a major factor in the apparent smoothness and comfort of today's shave.

The Shave:
A little rougher feeling than it's been, but still no drama. DFS-. The blade work went smoothly and gave me a reasonable shave, but with a bit more blade feel than I've gotten so far with this blade. I think this is the end for this blade. Not bad, 14 shaves from a 70+ year old blade. I'm impressed.

After using at least one of each blade, I got good shaves from all of them, the biggest difference lying in the longevity. On that basis I give the Gold to the Sharp Star, the Silver to the modern Lord Silver Star, and the Bronze to the antique ASR Silver Star. They were close enough that I went hunting, and found a few tucks of the ASR Silver Star. No luck on the Sharp stars though. 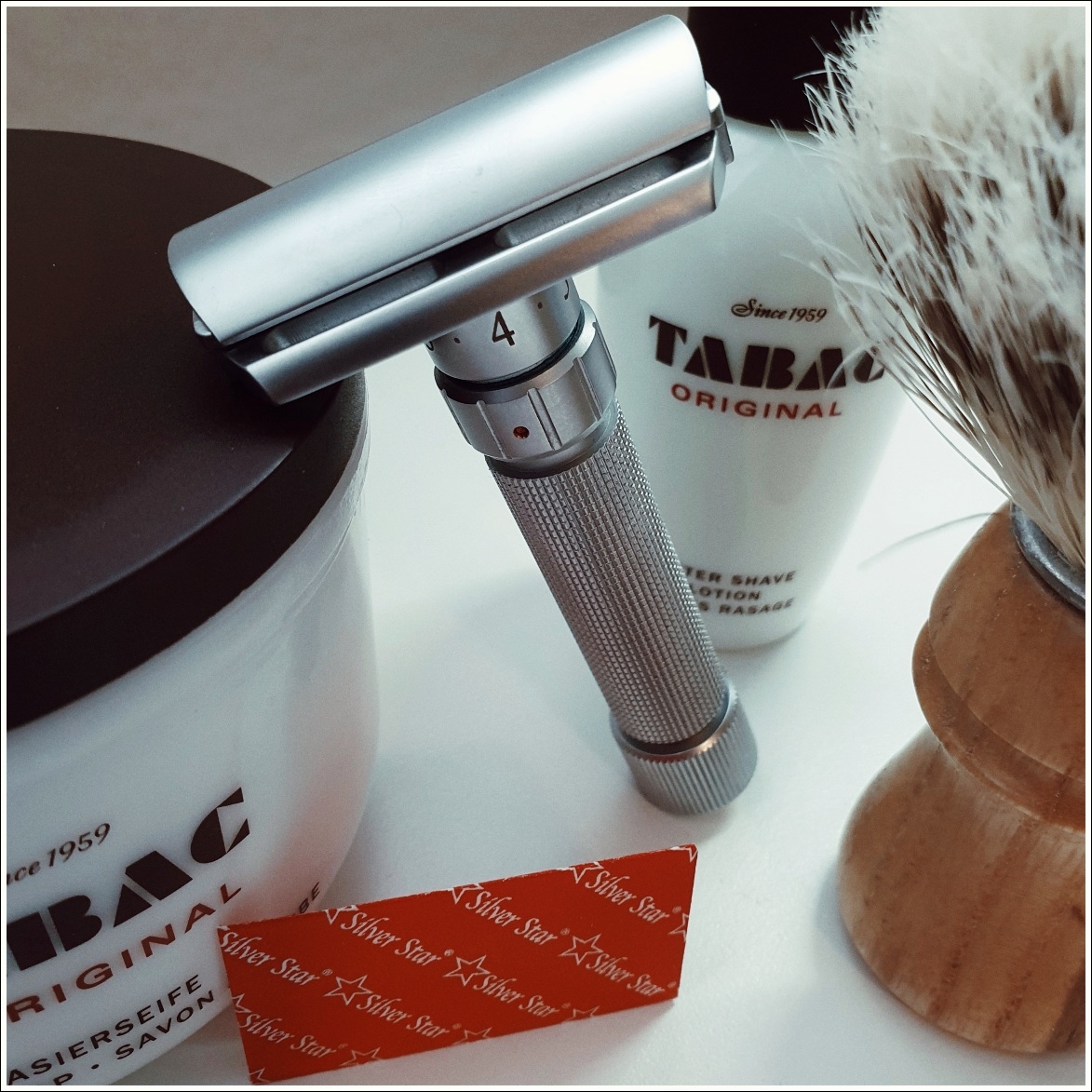 I'm struggeling to get the hang of this blade. The shaves are okay, but this blade seems to be just not sharp enough for my liking. To some extend the Silver Star reminds me of the shave experience I get with Voskhod blades... not my cup of tea...

Anyway, I'll give the Silver Star another try tomorrow.

Rating: 9.5/10! This blade is off to a good start! Question is whether it will stand up for awhile?? 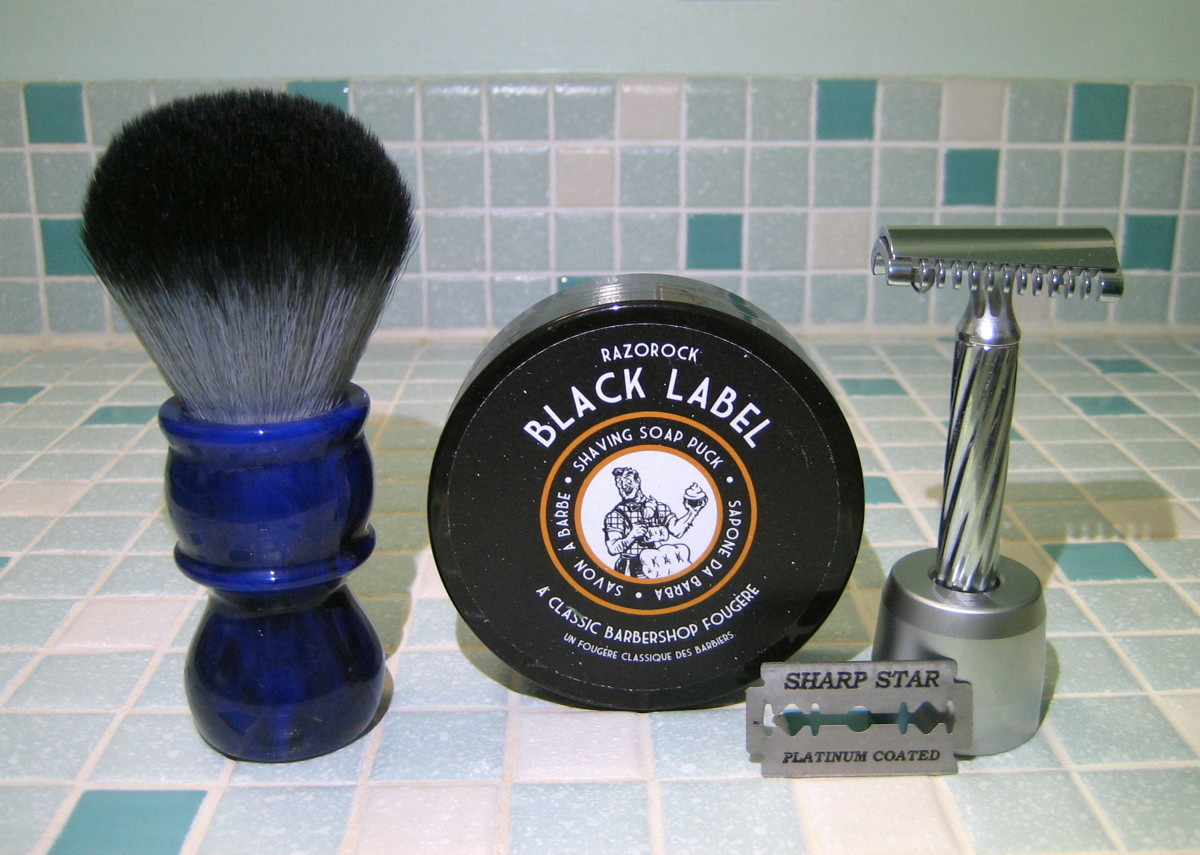 Another fine shave, but some signs of wear may be creeping in.

Today's outing resulted in another fairly easy BBS. My three usual passes were again smooth, but there were moments when it felt like the blade was dragging slightly. Blade-feel has also increased a bit, so comfort took a minor hit.

This probably isn't a surprise given that this Sharp Star is now on its twenty-fourth use. It could be on the downhill side of its life, but I suspect that it still has a few good shaves in it.

Comment: Outstanding shave today (10/10)! Either I am getting used to these blades or the blades are learning to work with me. No nonsense, no drama: just a fine shave!

Forgot to post this yesterday! Was on a little bit of a tight schedule, as I had a massage to get to, so I kept it to a simple two pass shave. Worked out just fine. Not as close as I could have got with more passes, but stayed nice and comfortable. 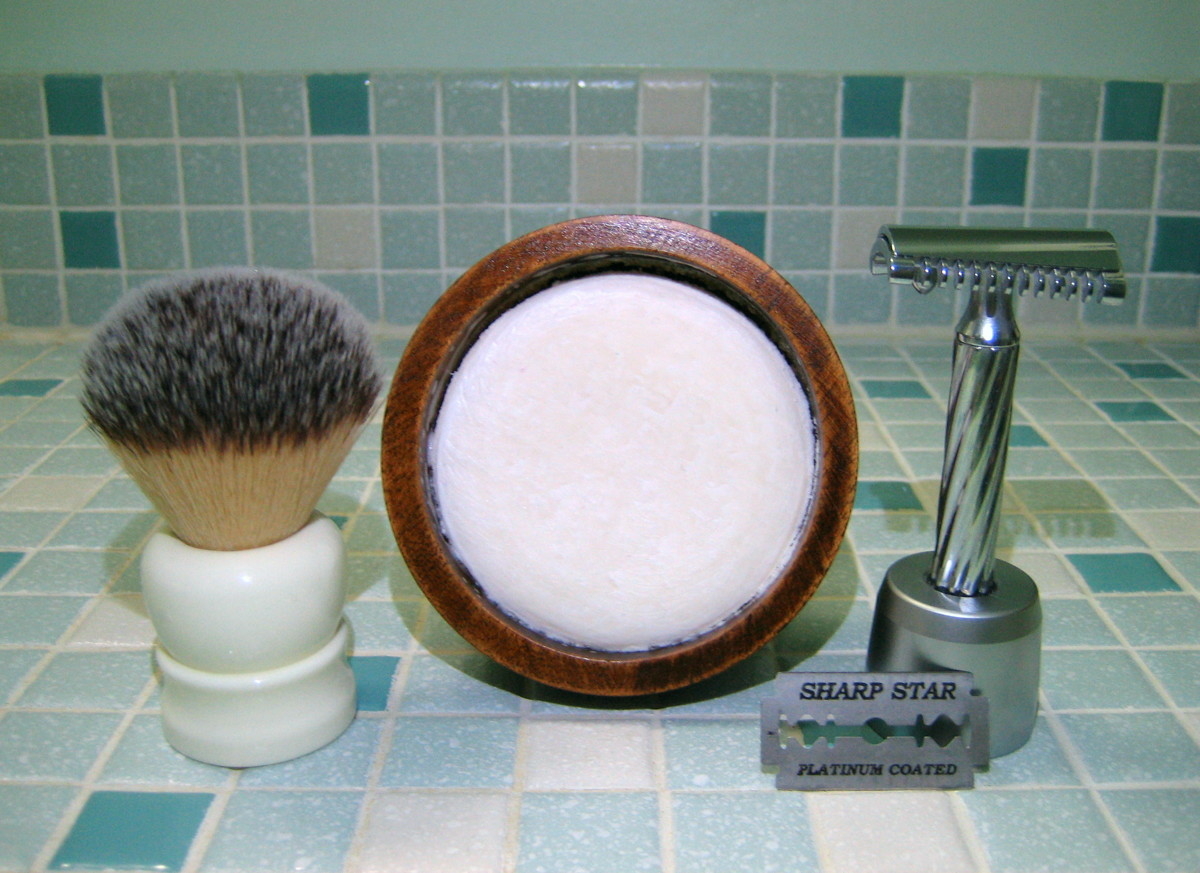 The downward slide of this blade continues.

Although I received a fairly smooth and comfortable shave, today, I can tell that the Sharp Star is nearing the end of its life.

Efficiency is definitely going down; this is most noticeable during the XTG pass and when buffing around my trouble spots as I have to put much more work in to get the closeness that I'm striving for. I did achieve another BBS with no post-shave irritation, though.

As long as this is the case, then I'll keep using this blade. Right away, I noticed that the blade wasn't gliding as well as it was previously. I had to expend a lot more effort to remove the stubble, particularly around the Adam's apple and along my jawline. I decided to buff, anyway, and achieved a solid DFS.

However, the extra attention in those areas resulted in some sensitivity during the shave. Then, after the final rinse, I noticed some mild post-shave irritation around the Adam's apple. A dab of ASB cooled it off, but I assume that this will be a regular feature from now on.

So, even though I usually soldier on through the rough patches (and often come out the other side with a rejuvenated blade), I think that I'm going to call it quits, this time. This Sharp Star provided 26 shaves, of which 24 were very good to excellent. Only the first and last shaves had significant issues.

Therefore, I can say with confidence that it takes first place in the Challenge for me. The Duridium finishes second and the modern Silver Star finishes third. it was a pleasure to try out an assortment of strange and exotic blades and many thanks go out to @Space_Cadet, @AnimalCatcher, and @Grundi for organizing this Challenge!

p.s. Depending on how long it takes for the "A Very Mysteree-X Shave" Participation PIF blades to arrive, I could start another Silver Star or Sharp Star in he meantime. I doubt that it will change my current ranking of these blades, but you never know.

Demolition said:
p.s. Depending on how long it takes for the "A Very Mysteree-X Shave" Participation PIF blades to arrive, I could start another Silver Star or Sharp Star in he meantime. I doubt that it will change my current ranking of these blades, but you never know.
Click to expand...

Might as well. Anything going through Canada Post will take at least 25 days, long enough for you to burn through another razor. Have a great day!

Not a knockout as the Sharp Stars are solid, just not great for me.

Special thanks to @Grundy, @Space-Cadet, and @AnimalCatcher for organizing this excellent match!!

I've just realized it's been shave 5 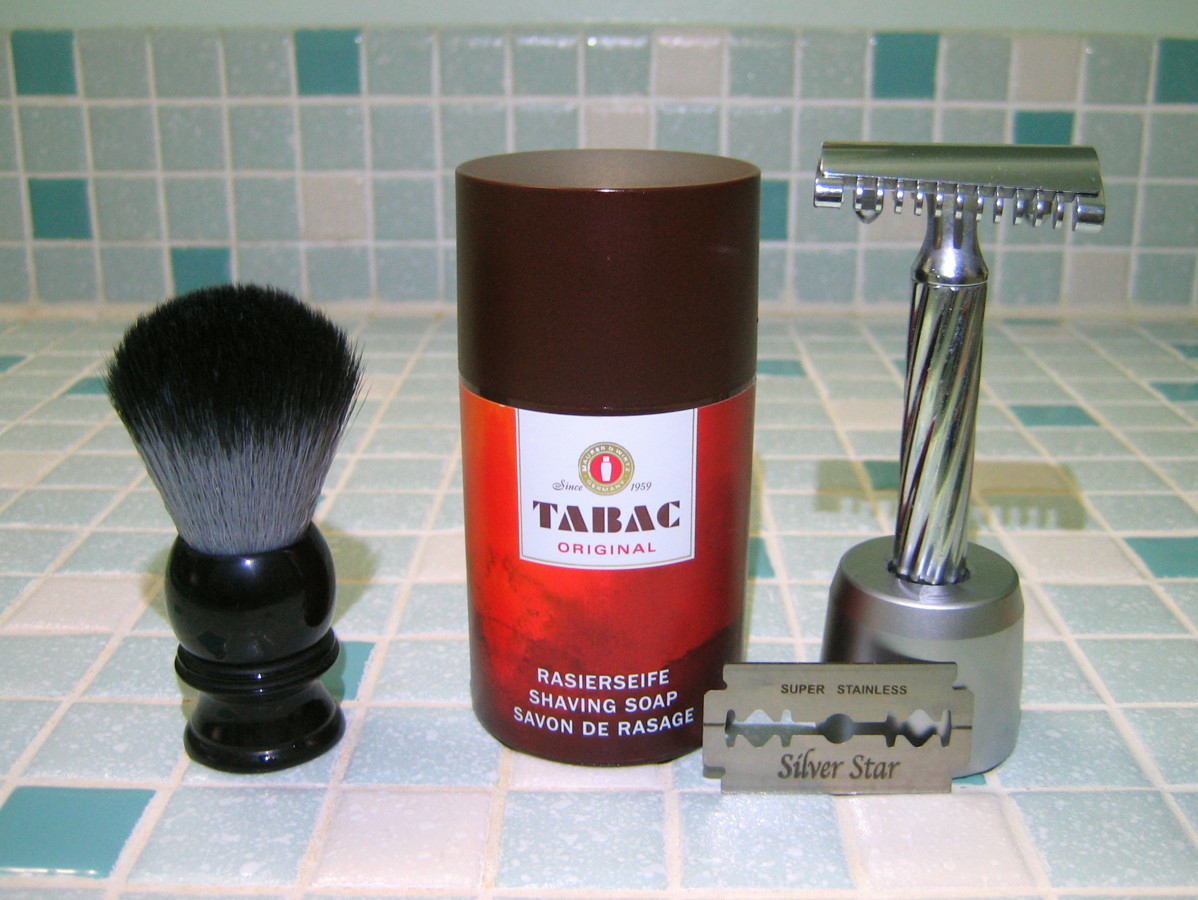 A good start for this blade, but past experiences have made me wary.

After some soul-searching, I decided to start my third modern Silver Star. As noted in previous entries, I haven't had much luck with these blades. While my three usual passes have been tolerable, I haven't been able to buff without ending up with severe post-shave irritation.

I have no idea why this is an issue. Could it be something do with the coating (or lack thereof)? Blade bevel angle? Phase of the moon? Cursed by a witch doctor (ooh ee ooh ah ah ting tang walla walla bing bang)? Whatever the case, I just can't get a consistently good shave from the modern Silver Stars.

Having said that, today's shave was not bad. My three passes were reasonably smooth and the comfort level was better than average. There was slight tugging at my jawline during the ATG, but this is fairly normal for a brand new blade. I assume that it will go away on subsequent uses.

I did perform some mild buffing, using minimal pressure and a light touch, and managed to achieve a DFS. I generally avoided the area around my Adam's apple, this time, but I'll give it a go on a future outing.

So, it was a pretty good start, but I'm still not convinced that this thing won't bite me, tomorrow! 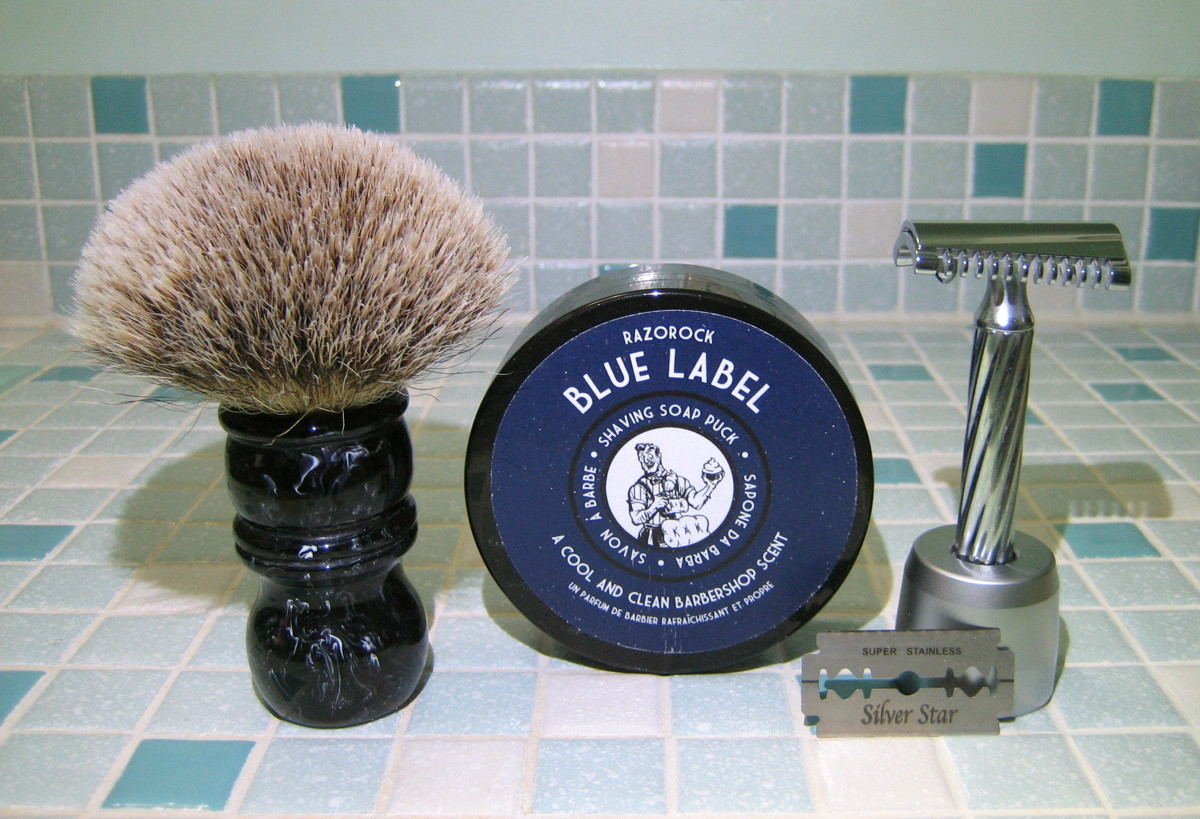 I had been looking forward to a smoother, more comfortable shave, today, but encountered a blade that seems to be getting worse instead of better. While the WTG pass was unchanged, the tugging that I experienced on the ATG pass is now noticeable on both the ATG and XTG passes.

At times, the sensation of snagging was quite severe and the worst occurrence left me with a small, but jagged cut an inch below my lower lip. This is the first sign of blood that I've seen during this Challenge. In fact, it's the first bleeder that I've had in many months. Not even the Duridium at its worst resulted in bloodshed.

To say that I'm disappointed is an understatement. I'm tempted to bin this blade right now, but I'm (probably foolishly) holding out hope that it will come around. So, despite my misgivings, I'll give it another chance, tomorrow.

In conclusion, both brands are smooth and not so sharp. The Silver Star is slightly sharp than Sharp Star. Both are middle of the road in sharpness.

I don’t know why, but the Silver Star is better, marginally better. I would buy more Silver, but not Sharp Star.
You must log in or register to reply here.