Mick said:
Yep... now my #4 gets used mostly for cornbread and sadly not that often. Haven't made pancakes in ages so the griddle along with the stack helps keep the cabinets from floating away.

Love that griddle, Mick. Would love to get one.

Contributor
I meant to add that I'm not sure I remember how to make cornbread in anything but my 8" Lodge skillet.

KeenDogg said:
Love that griddle, Mick. Would love to get one.
Click to expand...

Both the wife and I have some arthritis issues and I broke my left wrist in three places some years back, so the weight can be an issue. We have a skillet from the Field Company - less weight, more money!

There are some things that simply must be cooked in the cast iron.

Big fan of old cast iron. I view it as one of the few kitchen items that are truly BIFL. Love the refurbishing process as much as using. I have a swelling collection of skillets and a Staub dutch oven. One of my favorite pieces is a trivet of the NC state seal. 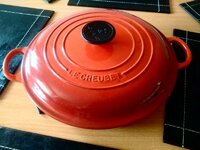 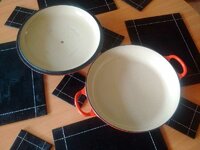 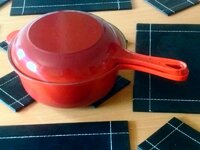 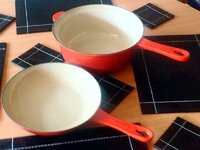 I've been meaning to get one of those reversible grill plate thingies for some time, but haven't done it yet.

Moderator Emeritus
I have a number 8 Griswold with lid that we use at least once a week. How are you guys seasoning your pans? I accidentally burned the finish off mine last week and I'm trying to get it back going again.

David said:
I have a number 8 Griswold with lid that we use at least once a week. How are you guys seasoning your pans? I accidentally burned the finish off mine last week and I'm trying to get it back going again.
Click to expand...

It's not down to the raw grey iron is it?

Put the skillet on the stove on high heat until it starts to lightly smoke. Careful, it's hot. Turn off the fire, wipe it down with a paper towel coated in Crisco shortening, then as it cools wipe out any of the shortening that "sweats" in the bottom and rub it all down with the sweated oil.

Just when you thought shortening couldn’t get any more useful, we made it into easy-to-measure baking sticks.

Mick said:
It's an old one.

Gate marks. You cad, you.

its nice to have a variety for different uses..... all clad, cast iron, nonstick, enameled cast iron dutch oven..... i do a lot of cooking of a variety of ethnic dishes and they each have their purpose. ill say stir frying in the cast iron just isnt as good

David said:
I have a number 8 Griswold with lid that we use at least once a week. How are you guys seasoning your pans? I accidentally burned the finish off mine last week and I'm trying to get it back going again.
Click to expand...

I find that frying up a batch of onions, garlic, and mushrooms in a bit of oil does a great job of maintaining the pan.

Contributor
@Doc4, you show another key for maintaining a cast iron skillet: the wooden spatula.

TexLaw said:
@Doc4, you show another key for maintaining a cast iron skillet: the wooden spatula.
Click to expand...

Contributor
Oh, yeah. Off the top of my head...

I think that's it. Most of it, anyway. Lodge, Griswold, Birmingham, and Camp Chef for the most part. We used to do chuckwagon-style dinners every year for about 60 or 70 of our friends during the Sturgis Rally. Every year we'd do big kettles of Rattlesnake and Buffalo Chili -- buffalo from a neighbouring ranch, and freshly harvested rattlers off our place. Fresh biscuits and cornbread for them as use it. Four or five kinds of pies.

My wife's genes are from Arkansas, she lives for cornbread. If there ain't cast iron on the stove (the electric or the wood cookstove inside, in the fire pit or on the big cooker outside) then somebody ain't started cookin' the next meal yet. 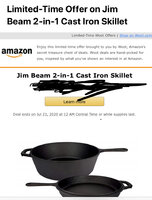 Moderator Emeritus
We have a few in the lye bucket right now and some waiting their turn to get in. We don't collect per se, but we have a large block logo Griswold #9 dutch oven with lid (no trivite!) that we don't really use. It's just too big. And a couple of pieces that we inherited from my family. We don't worry too much about coddling a pan's seasoning - we use metal spatulas - it's easy enough to get it back in shape. Just use it.

We just picked up a Wagner muffin pan, it's so nice for corn muffins, I've made corn muffins in it twice now, so it's a keeper.

Modern cast iron is a shame. I guess if they made thin wall, smooth finished inside cast iron these days, it would be priced like La Creuset.

Apparently they thought Lodge had branched out into bourbon, so turnabout's fair play ... 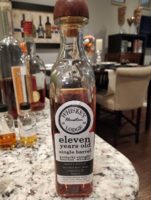 Doc4 said:
Apparently they thought Lodge had branched out into bourbon, so turnabout's fair play ...