Davidkimberly said:
Stopped into Castellon Pharmacy on Oak Street in NOLA today and was happy to see a good selection of products. Check it out.
Click to expand...

Living on the North Shore, I don't get into NOLA much and was not aware of this location. What kind of products are there? Inquiring minds want to know

They had several "economy" aftershaves, and a few varieties of Clubman including Lilac Veg, Citrus Musk, and Special Reserve. Next time I pass by I'll take a picture.
P

Davidkimberly said:
They had several "economy" aftershaves, and a few varieties of Clubman including Lilac Veg, Citrus Musk, and Special Reserve. Next time I pass by I'll take a picture.
Click to expand...

That would be great and kind of you. Thanks

I grew up in downtown New Orleans and later Jefferson Parish. Went to Metaire Junior High and graduated from East Jefferson High School. In Metry. That's where it's at.

But, I no longer live in Louisiana.

Yeah you right
(And maybe a snoball)

Davidkimberly said:
Yeah you right
(And maybe a snoball)
Click to expand...

And some oysters. I swear, if I don't get about a dozen in me soon o might have to sacrifice a child. 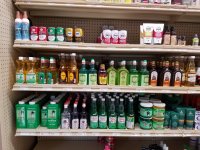 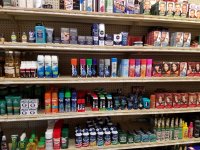 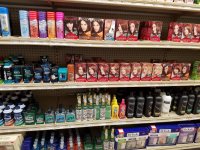 @poppi
As you can see lots of cool stuff although no blades or razors.

Wow! That's a great selection for a pharmacy. Bit to far of a drive for me these days, but definitely good to know!!! 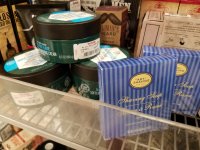 I put it on the bottom shelf. Also the was a Van der Hagen badger brush and some interesting aftetshaves.
P

My goodness! That's a lot of stuff for sure. And they have the "VEG", never seen that in the wild before. Think my bride and I need to take a road trip from the Northshore, visit there and go to Juan's Flying Burrito on Magazine. Yup, sounds like a plan

Where's @dangerousdon, @Bobbers, @Tigersfan? I'm out of town or I'd be interested in this.
B

Contributor
I had to work, did anyone check out this sale?

Davidkimberly said:
*moderators feel free to remove if not allowed*
Baton Rouge folks, there is an estate sale that looks like it has a few interesting items including a fat boy. It starts Thursday. It's too far for me but if you're in the area...
Check estatesales.net or google estate sales in New Orleans.
Click to expand...

Avvatar said:
Where's @dangerousdon, @Bobbers, @Tigersfan? I'm out of town or I'd be interested in this.
Click to expand...

Well...I haven't been here in a while (as you can tell) Guess I missed this one. But thanks @Davidkimberly for letting us know!

"Billions of mosquito lookalikes are showing up in the New Orleans area, blanketing car windshields, littering the ground with bodies and even scaring some folks.

They’re aquatic midges, often called “blind mosquitoes.” They don’t bite and they’re good for the environment, but they sure can be a nuisance.

In this time exposure of 1/10 second, a swarm of blind mosquitoes, or aquatic midges, is seen as traffic drives on the Causeway Bridge, with dead ones on the pavement, over Lake Pontchartrain, in Jefferson Parish, outside New Orleans, Tuesday, June 18, 2019.

“They tend to emerge in the billions, with a B, generally. It’s all at once and doesn’t last too long. But in that time frame it’s living hell,” said Nick DeLisi, entomologist for the St. Tammany Mosquito Abatement District on the north shore of the huge tidal basin called Lake Pontchartrain.

The swarms smell like aquarium fish food -- some compare it to rotting fish. It can be worse inside buildings where the critters creep through cracks and die in droves.

"It can smell like aquarium fish food when midges die by the thousands in clumps inside buildings".

These midges lay their eggs in fresh water, and they like it polluted. Normally, Lake Pontchartrain is brackish — but since May 10, it’s been receiving Mississippi River water diverted to ease the strain on New Orleans’ levees. The water is rich with fertilizer and other pollutants, flushed out from farms and cities across the middle of North America.

Midge swarms also are showing up along the lake’s south shore, in New Orleans and suburban Jefferson Parish, and along the 24-mile-long (38.6-km) twin bridges connecting north and south shores.

Blake Campo of Hahnville pulled his pickup into one of the Lake Pontchartrain Causeway’s “turnarounds” Tuesday night, no longer able to see through his windshield. He’d used up all his wiper fluid trying to clear off bugs, and only created a thick, opaque coating. Buzzing midges surrounded him as he cleared off the muck with the only liquid he could find in his truck — a bottle of spray wax. [...].

Blind mosquitoes, or aquatic midges, cover the front grill of a truck driven by motorist Blake Campo, who stopped along the Causeway Bridge over Lake Pontchartrain after he could no longer see through his windshield, due to swarms of the insects, in Jefferson Parish, La., outside New Orleans Tuesday, June 18, 2019.

Blind mosquitoes, or aquatic midges, are seen on a windshield at New Orleans Lakefront Airport in New Orleans, Thursday, June 13, 2019.

The midges swarm as they look for mates, so DeLisi said there could be new generations in several weeks. “They might not be quite to this severity,” he said.

The larvae of this sort of fly are important food for fish, and the flies themselves feed birds. “Chironomid midges are a gigantic part of the food web,” DeLisi said.
But to most people, they’re just aggravating.

“It’s so bad you’ve got to literally get a push broom to push the carcasses away from doorways every morning,” [...]".

I'd forgotten about love bugs. It's been a long time since my childhood in New Orleans and Metairie. Thinking about love bugs somehow reminds me of the Fog Man. Remember running behind the truck?

Not that I never did that, but I really didn't quite get the appeal of it + it smelled off-putting to me. Sort of unbelievable now to think about some of the things so commonplace then vs how most people see hazards now.

When I lived in Airline Park the canals were prominent. We played near them, caught and played with snakes, threw cherry bombs at each other under the canal bridges, and somehow managed to avoid sliding on the slick canal mud and ending up in the nasty water.

Oh my word! And I have to cross the causeway tomorrow morning to take my daughter to the airport. Dang

Really these little guys are gross but very isolated and seldom. They don't compare with the termite swarms that happen often and everywhere in the city, or the stinging caterpillars that fall on you from the trees, or the flying cockroaches, or... well you get the idea.

Stopped back at Castellon Pharmacy again today on my way to the barber and found where they keep their hardware. I was happy to see a better than "typical for a drugstore" selection: 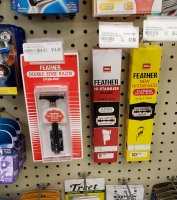 Feathers AND The Veg?!?! Whoa! Where is this place?
You must log in or register to reply here.