Brush Review - happy with what I've been given.

So once the razor situation was sorted (I'm keeping the Gillette Slim Adjustable that @airmech so kindly PIFd me, and will PIF or charity auction my Parker 26C that it is replacing), it was time to move on to brushes.

Back when I was collecting I was able to try out a few different brushes in a lower/mid price range. I gave away my collection to the charity auction, continued DE shaving but it was a good few years before I wandered back to B&B. The only brush I kept was my "Lijun Shaving" silver tip badger, which has served me well. It is, after about six years, very mildly shedding. In avoidance of a relapse to RAD, I'm only allowed what I "need". But despite having a perfectly adequate brush with very mild shed, it seems reasonable to have a back up brush in the wings. *cough*not RAD*cough*. I also saw that synths were more acceptable then they were a few years back, and I used to have a boar I quite liked. I narrowed my choices, posted them, and asked people to chime in with their opinions. Again, the generosity of this site is amazing. First @Phoenixkh offered me the PAA Atomic Rocket, and then @APBinNCA gave me the Semogue 610.

They fit the bill completely.

The Atomic is my first synth, extremely soft, much heavier than I expected, and quite long. As I've mentioned in other posts, lathering is not my strongest skill, I'm getting better, but the Atomic lathers up like a dream. I've found that the length really makes a noticeable difference for my legs, I didn't realize how much more effort it was taking with a shorter brush. My Lijun is fairly full, but with a somewhat short handle. So, win there, and anyone that likes a longer/heavier handle, soft but not floppy bristles, and lathers up easily, this is a good option. I also appreciate the easy rinse/quick dry.

A second brush, meant only for chin, was another consideration *cough*not RAD*cough*. I could use my Lijun, but it's fairly full, and unlike a guy, I'm just needing it for chin and a bit of neck, and it's fairly light by guy standards (by girl standards, not so much). There were various suggestions of mostly larger brushes, but @APBdefinitely understood where I was coming from. The Semogue 610 is a a nifty little boar brush. Soft, but with some spine, lathers well, obviously for a little brush, it's not going to load up with gobs of lather, but it gets the job done, and it was what I was looking for. It took me a tiny bit longer to warm up to. Basically a bit more working in, and changing up my technique a tad, and it when from a bit prickly to more of an exfoliating brushing. Rinses well, but seems longer to dry than my badger, I'm not sure if that is a usual badger/boar difference, or just happenstance.

My lijun has stood up well over time, fairly soft to begin with, and more so now. It loses 6-12 hairs, at most occasionally more like 18...but not every time I use it, sometimes it doesn't shed at all. It's so full, it doesn't even show that it's thinning. It isn't the easiest to lather with, I found both the boar and the synth easier. I don't think I'd give much weight to that though, as their is such a wide variety of brushes in each category.

For now, I'll hold on to the lijun, though I'm already suspecting it will end up as a PIF or auction item. Obviously I'll be upfront about the shed, but it is a nice little brush all the same.

Now, for pics. Heads dry, Heads wet. Name/logo showing (its rubbing off, but the yellow one is the lijun shaving). And two pics with blades and my Slim for size comparison.

Tiny hold up with my TOC order, an item was out of stock, but I missed the email, Carmine was wonderful to track me down via text, helped me make an alternate choice, and order will shortly be on the way. All of this to say, once it arrives, I'll be doing my soap review, and farther down the line from that blades 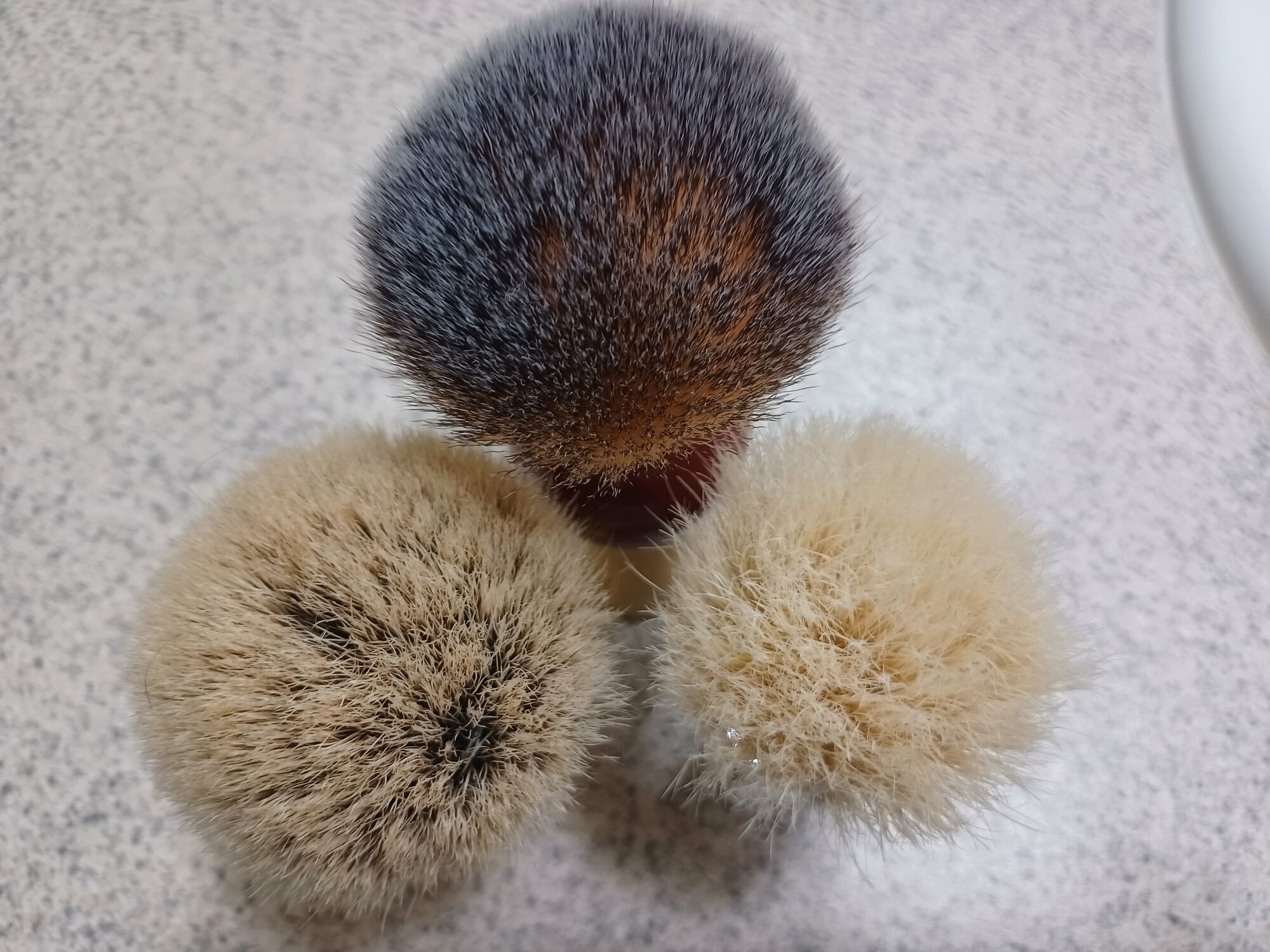 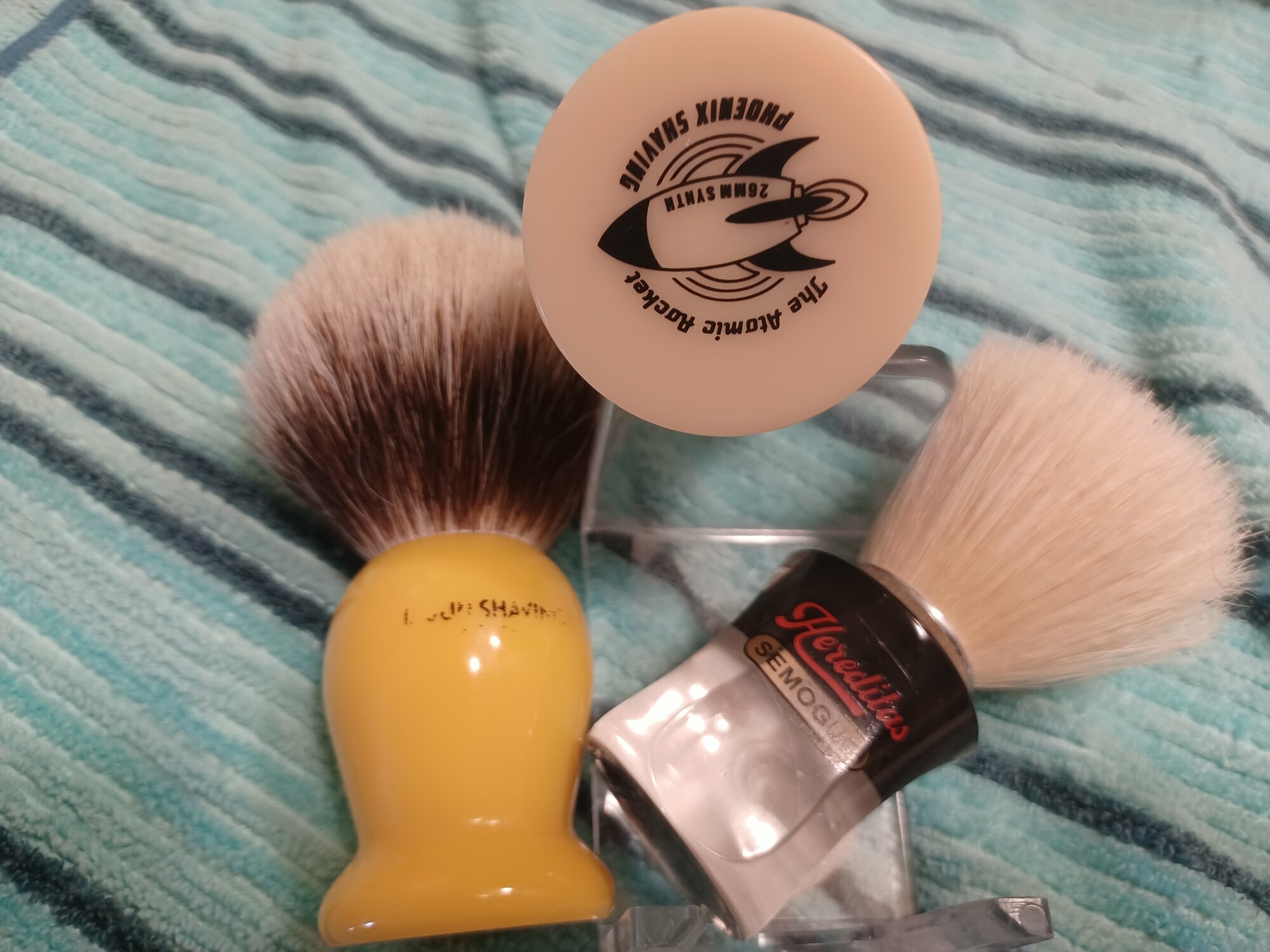 I am glad everything is working out well for you. Honestly, your Lijun isn't looking too bad! I have personally been moving away from bulb knots and that is a further preference knob to turn aside from dimensions. Your new synthetic is a nice hybrid shape of sorts, like a Simpsons. I may play with my brushes too much, but I like to lightly splay them in my palm and observe how they spread out. It tells me a lot about how they will perform, or at least how wide of area they will cover. Nice pictures!

Congratulations! You are well on your way to becoming a ‘minimalist!’

I'm glad the longer handle on the PAA Atomic Rocket is working for you... .I was hoping you'd enjoy it.

Congrats on your two new brushes.

Congrats! Isn't this a wonderful community? Thank you for your post, enjoy your shaves!

Glad to hear things are working out, and that's nice looking Lijun. Continued success on your journey.
C

Some of those brushes look as if they have been "ridden hard and put away wet".

I made the mistake of buying a Simpson CH3 Chubby Super Badger and now every other brush feels like I’m holding onto a roll of dimes
You must log in or register to reply here.

What's the real story on Simpsons Chubby brushes and shedding?
2 3

Yesterday at 8:39 AM
Owen Bawn