And the other two vintage brushes from yesterday's gamebag:

Ever-Ready original horsehair(?) knots, handles are in good shape. The knots both act like horsehair, but the fluted bakelite(?) handle brush has much coarser hair and shed more bristles during clean up. It also made a LOT of brown lather during cleaning!?! Both came with a soapy feel and scent. 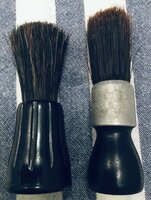 Is this model zero?

The barber style has a faint 'Ever-Ready' and the legend HARD RUBBER GRIP on the ferrule. Is the knob made of rubber? Or is there a hard grip on the bristles? Additional markings on the opposite side:
MADE IN USA
STERILIZED
55

My Every-Ready vintage knotted brush collection is getting out of hand.

Yesterday's mail call.
Brush by 'bullseye brushworks'.
Threw my 27mm Rhodium hybrid shaped knot in there for the full effect. 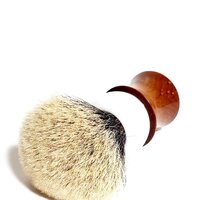 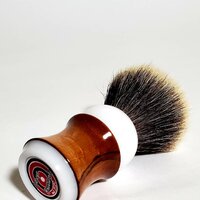 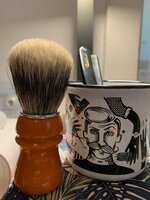 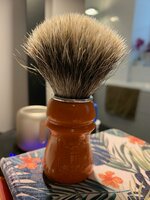 After months of hesitation, I finally ordered a Wee Scot and a Case C1 from Simpsons, both in best.
Still doubtful about their performance, never used tiny brushes. They should be here in a week or so.

Contributor
I ordered this in early December of 2020, but it arrived in January of 2021. 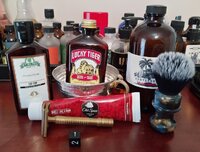 Contributor
Thought both the handle and knot on this Vintage looked really interesting.

Interesting that's it's from Germany, the first thing I thought when I got an up close look at (And feel of) the knot is... "This is a lot like Shavemac 3 band".

Suspect it may be a reknot though... brush looks unused but there is soap buildup (or maybe exposed adhesive) under the metal band. If it is a reknot, looks like a real high quality one.

Was bought from a seller who said it came from a local estate though... so maybe not a reknot?


Knot smells like old tobacco and is incredibly soft. I think it's original. It's soft... real soft... vintage silvertip soft. But the loft... why... why are these vintage brushes so lofty? 5mm shorter and this'd be a world class brush.

Contributor
I was able to pry the metal ring up. It's cement not soap, it was New old stock and the original knot

I want to get the knot out, but I don't think it's possible. It's holding firm, and that white cement I kind of doubt is impacted by steam.

Contributor
Steaming worked. Knot is already being rehomed at a better loft (46.4mm). Sadly the heat caused several hairline cracks around the knot on the handle... we'll see how obvious they are once it cools off and I drill down the shelf.

Contributor
How is the Pure? Both Scritch and Density wise?

SliceOfLife said:
How is the Pure? Both Scritch and Density wise?
Click to expand...

Realize I've only used the brush three times. Cal @Cal, who's used the Shavemac Pure a lot more would be a better source.

I'd say the knot is exactly like it's described in a comparative way on the Shavemac website, but that doesn't quite do it justice. It really shouldn't be compared with other knots, in my opinion, but evaluated on its own merits. In that regard it's a lot like the Zenith extra soft horse which is a knot I like a lot more than I should. Both are much better knots than I'd think were I to look only at the characteristics we commonly talk about. That's not to say the Shavemac Pure is anything like the Zenith horse, but I like them both.

The Pure is not dense. Not by any standard could it be called dense. It's way away from dense. Regardless, it's a good knot. It performs well in spite of not being dense.

It also doesn't have much backbone.

What it does have is scrub. The Zenith is similar in that it doesn't have density or backbone but it too has scrub.

I think you know I am all about scrub. If a brush isn't scrubby I'm not going to like it.

What about softness? I'd say it's not so very soft, but it's certainly soft enough to get by. Plus, Cal tells me the knots become considerably different as they break in, and mine's only been wet four times (I washed it the night before it's first shave).

It feels a bit pokey to me, but, like many brushes - the CH2 in best being an example - which feel a bit pokey to me, its pokiness largely goes away when I mash it just a little bit into my skin which I usually do. Used to paint it's soft and not pokey.

I am not entirely sure I know what everybody else means by scritch. I distinguish between good scritch and bad scritch. I'd say it has, so far, a bit of bad scritch, but not too much. 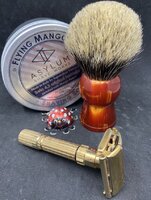 I told Rudy Vey yesterday that they jury's still out on the knot in terms of whether it will make it into my usual badger rotation. Today, after one more shave with it, I think it will.

So far, it's not the brush I'd jump to if wanted a lot of backbone or softness (and softness to me is overrated but sometimes what I want, at least relatively speaking with adequate scrub; softness without scrub being to me useless).

As I recall you love, love, love density. This is very much not dense, but that doesn't mean I am saying you wouldn't like it. I think density is overrated; not that I don't like density, but I don't like density for the sake of density in the same way I don't adore softness. This brush rinses easily and quickly and has great flow-though perhaps because it's not dense. The main thing is the brush performs well as a shaving brush according to my standards in spite of not being dense.

Yesterday I told Rudy @Rudy Vey I'd like a Shavemac D01 Pure in a hybrid or a fan. Good luck on that one.

Contributor
A place I don't absolutely demand density is pure knots. For instance, the Duke 1 Pure's I bought, I liked using when they weren't shedding... but... I still always prefer density.

I won't use a loosely packed 3 band or boar. Even with average packing, I need the lofts super low to find them worthwhile.

A 2 band has to be INCREDIBLY good/stiff hair for me to use it loose packed... The early M&F Blonde hair was like this. The one M&F I have kept isn't loose packed, but it's also not dense... but the hair is so similar to Rooney Finest in how stiff it is, it has backbone that beats out these current UHD/SHD/etc knots for backbone. That said, I can't say whether or not those brushes WERE the same hair as Rooney Finest (which some claimed they were back then), but I'm still not going to say that brush is as good as my Finest... which has probably 3x as much hair in the same size knot. It's a great brush, but it's no Rooney Finest.
Good pure in my experience is virtually identical to REALLY top notch two band... but with more scritch added in. It's got incredible backbone so like top quality 2 band, it doesn't DEMAND density the way 3 band does... BUT I've got a vintage Kent Pure that is packed about as dense as the more affordible Simpsons (46, colonel) and the old Rooney Supers were (Significantly more dense than almost any other Pure I've tried) and good lord is that brush incredible.

Contributor
I used the Luma knot @ the new loft (24mm @ 46.4mm loft now) today and wow. It is absolutely top notch vintage silvertip. Fantastic softness, and at the new loft it's lathering great. May become my new 2nd favorite 3 band (after my Custom Eagle G3). But That tobacco leaf and Badger stink is rough. Gonna take awhile to wash that out. That said, the hair is amazing. Really sad that the handle cracked a bit during removal, but so worth it to save this knot.

Tanuki said:
More vintage. Opal 10. This is a hefty one, 55mm x 38mm, 24mm knot. It desperately needs a new knot.
View attachment 1202151
View attachment 1202150
From the archived 'OSSB' site:
"Opal Shaving Brush Inc. was originally called Pal Shaving Brush Company and was founded in 1948 in New York City. In order to avoid confusion with Pal razor blades it was renamed Opal Shaving Brush Company in 1957 and was active until 1973 when the founder, Adolf Schneider, passed away. Opal was pronounced O-pal."
Click to expand...

Follow-up after re-knotting:
The upper part of the Opal was a largely hollow globe. I filled the voids with Minwax epoxy filler. The adhesive that held the knot looked nothing like "rubber".

Now it has a Shave Forge knot set on scrubby:

Sent from my SM-G973U using Tapatalk

Here is my new Simpson: 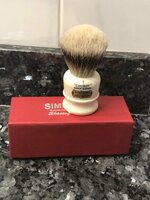 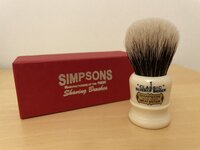