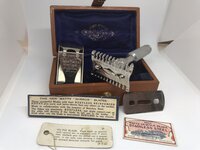 The John Watts New Service razor arrived today. Sure a strange but nice looker, and in great shape complete with case, blade holder, original blades and even accompanying paraphernalia.

The following is the back story of this interesting DE razor, as far as I have been able to gather information on the internet.

The John Watts Cutlery Works in Sheffield, UK - almost 300 years of history
The company was originally founded in Sheffield, the great home of UK heyday razor production, and stayed there for its full 236 year history. It was founded in West Bar Green by Michael Shaw in 1765, who manufactured clog clasps and dog collars. After 1833 it was run by Brian Bates, who was related to the Shaw family by marriage. John Watts became a partner in the company in the 1850s, however, Bates dissolved the partnership in 1862 and moved to Buxton later becoming a successful hotelier. This left the company in John Watts’ capable hands, and during the next twenty years he expanded the company from its home in Lambert Street.

His son, also called John Watts, developed the manufacturing range and in addition to making clasps, graining combs and ice skates, they added pen and pocket knives and razors, the latter started around 1915. They were also metal stampers and piercers. John Watts Ltd. was in business until 1999, and by 2007 factory the building had been converted into flats.

The razor
The New Service model was patented and released in England in 1929 and patented in the US in 1931. It's an adjustable razor that uses standard DE blades (or so I thought...). There are 2 tributes which stand out: The option to adjust the angle of the head and the lack of topcap. Instead of a topcap the blade is secured with a simple folding clasp.

To fit a standard blade, it turns out, will take a little adjusting as the studs are about 0.5mm wider apart than normal. First shave up as soon as I get that done

Never heard of this razor, delighted you took the time and made the effort to post. Congratulations on a great find. It looks like it came out of a museum display!

And thanks for the history.

Contributor
That is one beautiful razor! Congratulations on a great score!

Thanks all, appreciate your kind words! I’ll report back once I’ve tried it.

Contributor
Great write up, I had never heard of this razor and I love learning the history vintage gear. Looking forward to the first shave report!

Wow! That looks drool worthy. Would you mind showing the blade. Is it proprietary or is it standard.

Beautiful razor. I made a cap to hold thinner modern blades. 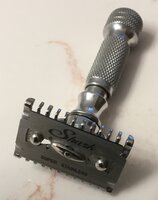 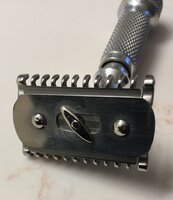 I saw that John! Very ingenious, but unfortunately I have no such skill. You wouldn’t happen to have an extra, good sir?

Northstonehill said:
I saw that John! Very ingenious, but unfortunately I have no such skill. You wouldn’t happen to have an extra, good sir?

Next rainy day I'll check the workshop. If you have a extra old Watts blade you could grind it smaller.

I do have an old blade. Maybe I can find someone who can grind it down for me