Moderator
Well fellow members, I am seeking recommendations for what you consider to be the best half blade for an SE razor. I recently pre-purchased a new Yaqi SE razor called the Katana. It takes a half blade and I am not interested in snapping DE blades in half. What do you SE users prefer in half blades? Let me know what is out there and what you consider to be the better/best blade. Thanks in advance.

Ambassador
I'm very interested to hear what other folks say, I received a package of Crown half blades with my RR Eco, but I haven't tried them yet -- they received such bad reviews from folks here that I started out by snapping my Nacets. I didn't think there were that many choices, but out of curiosity I just went on to Italian Barber and I see Derby has a couple and so does Shark.

So I'm zero help when it comes to your original question, but I did want to say that I wasn't excited at all about breaking a razor blade in half, but I bit the bullet, left the blade in it's wrapper and just folded it in half....it broke cleanly and quickly. I know it sounds weird (and dangerous) to break a piece of sharpened metal with your bare hands, but you may want to treat it as a science experiment and try breaking one. Just remember to leave it in the wrapper when you do it and it'll be fine. Just a thought from a guy who never thought he would never consider doing it.

My advice would be to take your favorite DE blade and snap it in half while it is still in the wrapper, like Fred said above. I don't think there are any very good blades that come as half DE blades. On the other hand, I would never buy a razor that used half-DE blades. So many better options, including razors that take AC blades. Just my $0.02.
X

Moderator
Thanks for your input Gents. I have some research to do now.

Don't snap blades in half, I cut them in half with very sharp scissors. It's much better and doesn't leave a knurled edge so the blade sits flatter. I use this type of nail cutter, does an excellent job, but any decent scissors will do. 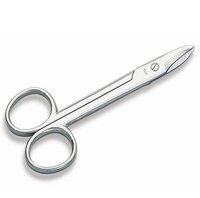 Another vote here for cutting DE blades in half with sharp nail scissors. I cut them in batches for my Broman razor. Using scissors means you don’t have the curled part that happens when you snap. This can cause fit issues with the Broman! I then fill the storage compartment on the Broman stand. They fit perfectly. For the record I tend to use Astra SP blades.

If you REALLY want half/saloon blades then Permasharp work fairly well for me. The issue I have is that no-one offers sample packs of half blades and I don’t want to be stuck with a whole 100 box of blades I hate!

Try a Shavette razor blade or try them all

abershaver said:
Another vote here for cutting DE blades in half with sharp nail scissors. I cut them in batches for my Broman razor. Using scissors means you don’t have the curled part that happens when you snap. This can cause fit issues with the Broman!
Click to expand...

Good to know about the Broman. The Focus Slim Al is the exact opposite - according to the manufacturer, it relies on the extra tension from the broken curled part to hold the blade securely in the razor.