Have googled and read for 30 min but still not sure what Bay Rum smells like.
Does it smell very close to the original Old Spice aftershave?
If it's allowed, can anyone give me the best Bay Rum cream or after shave?
Thank you.

Nothing like old spice. Bay Rum is hard to describe, you just have to kinda smell it. And there's a wide spectrum of scents too. Some are light and sweet, some are harder and spicy. I'd suggest you start with Captain's Choice. It's a very good representation of what BR should be, without being an outlier (like Pinaud).

Hmmm, thanks Vez...funny, I was just now looking at Pinaud and Captain's Choice on Amzn. Which are harder and spicier? Is there any woodsy earth scent to it, or gin? @TheVez2
I know, I'll just have to try it. Leaning toward the Captain's Choice for now. Yow, then there's the new Cat'O'Nine Bay Rum!
Last edited: Apr 13, 2017

It's not really a woody scent to my nose, but it's in that general realm of earthy scents.

The Bay Rum plant is in the clove family, so some bay rums have a very clovey vibe to them. Other's none at all.

Superior 70 is a great basic, as plain as they come Bay Rum. Awesome if you can find it.

Master Bay Rum is the same basic type scent, but it is a lot sweeter, and pretty heavy on the Glycerin.

Pinaud Bay Rum is very spicy. Heavy on the clove scent, and I believe it also has cinnamon oil added to it. It BURNS. That's not bad, and may like the burn. It'll just catch you off guard if you aren't prepared.

Bootlegger's Bay Rum is a homemade mix created by B&B user OkieStubble. It is made by mixing equal parts of the 3 above. It really balances well and is one of my favorite Bay Rum and a real favorite around B&B!

Captain's Choice is another favorite. It's nice and balanced. It does have a slightly clovey scent, but not heavy like Pinaud. If you like the Burn, Captain's Choice also makes Co9T which is their Bay Rum with added burn.

Captain's Choice aftershave Bay Rum and Cat o' Nine Tails (Co9T) are pure bay rum, nothing more, nothing less. Comes in a splash and a balm. He also offers a bay rum soap.

Thanks GreyBeard and Vez. Some of those reviews on Amzn are mixed...some talk about Bay Rum and some talk about North, all in the same reviews...so I didn't know that at first.
Just bought the original Bay Rum aftershave and some North shaving cream. (they were talking about the North when they said it was woodsy)

IMHO, Dominica Bay Rum is what bay rum should smell like.

Would like to try that Shiloh.
Anyone on here tried the BarBerry Coast Bay Rum and how IT compares? Quite expensive though.
I better like Bay Rum lol
Last edited: Apr 13, 2017

Contributor
According to the wife, it smells like Thanksgiving.

North is amazing! It's my favorite scent from the Captain! The North Splash is in my Top 5.

My kids always tell me that it smells like Christmas when I use Pinaud's Bay Rum. It's the cloves.
D

Ogallala! Grab the sample pack. I'm not much of an expert on the Bay Rums, but I really liked their stuff. Captains Choice stuff is on my list to try.
Last edited: Apr 13, 2017

Heh, sample pack had some I didn't want.
Pffft, they didn't have North Splash on Amzn. . . so bought their cream. Holy Mad Trapper, I'm going to be shaving twice a day now.
D

AlbertJohnson said:
Heh, sample pack had some I didn't want.
Pffft, they didn't have North Splash on Amzn. . . so bought their cream. Holy Mad Trapper, I'm going to be shaving twice a day now.
Click to expand...

Check Maggard's or West Coast Shaving for North. I've seen most, if not all, of the Captain's line at both.

I found the Bay Rum from Pinaud too strong. the Captain's Choice is much better. What I like even more is Superior 70. It also is pure with no extra additives. And it does not cost much either. My favorite. 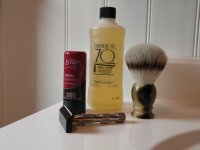 I don't know why it took me so long to buy Superior 70. It's a delight.

That is an aftershave...that Superior 70??

edit: @Diggz I didn't know Ogallala was a brand...heh, I thought you were saying like "holy cow!" or 'oh my gosh!' with your Ogallala!
I found that sampler pack and may try it...thanks for the suggestion.
Last edited: Apr 13, 2017

Contributor
I am a fan of ogallala bay rum with peppercorn and limes. It is not a straight bay rum, but, the additions really add to the overall scent in my opinion. Plus they are pretty cheap. They have a full line of products from bath soaps to aftershaves too.

Sent from my SPH-L710 using Tapatalk

AlbertJohnson said:
That is an aftershave??
Click to expand...

If you are referring to the Superior 70, yes, it absolutely is an aftershave.

Old Spice and bay rum pretty much run off of different spices.
I can't really peg what OS is, but bay rum is like a subtle mix of bay leaves, cloves, and rum. It's crude to say, but some people swear it smells like (US) Thanksgiving dinner

It truly is. I recommend it as the ultimate point of departure for those venturing into bay rum. Bay rum in its purest form and quite inexpensive if you can find it at your local bodega, and not priced too badly on-line. I say point of departure, but you could stay right there with Superior70 and never miss a beat.

I do however like it mixed with VIBR.(Bootlegger's)
You must log in or register to reply here.