Bang for The Buck

Quijote said:
My biggest questions were the density, face feel, how easily they lather, and if they are lather hogs.
Click to expand...

Can you find the dragon eye in handle A ?

Quijote said:
My biggest questions were the density, face feel, how easily they lather, and if they are lather hogs.
Click to expand...

I'm curious about this as well!
Also was the Vig shaving knot the one with the larger glue bump? Any shedding issues with any of them?

Graydog said:
Can you find the dragon eye in handle A ?
Click to expand...

I didn't until you mentioned it. Nice touch.

DCRIII said:
I'm curious about this as well!
Also was the Vig shaving knot the one with the larger glue bump? Any shedding issues with any of them?
Click to expand...

Today's Shave was great ,I used 1 brush for each pass and did a face lather with each.
And I used 3 different Razors as well I figured what the heck let's go wild ---Ha.
I will post the results of the shaves Sunday.
Here is a picture of The "Great Bloom"

What constitutes a GEL Tip ? I have heard the term before but never understood it

Nice thread Steve! To me, the Maggard looks fuller than the rest. Based on just these pics, that's what I would go with.

CigarSmoka said:
Nice thread Steve! To me, the Maggard looks fuller than the rest. Based on just these pics, that's what I would go with.
Click to expand...

It feels like it also but one of the other ones feels softer and it doesn't have white in it's name .

Graydog said:
What constitutes a GEL Tip ? I have heard the term before but never understood it
Click to expand...

gel tips are the very tips of the brush hairs hook over and create a soft gel feel. a picture from an earlier post:
Are the older Rooney Shaving brushes with gel tips a myth? 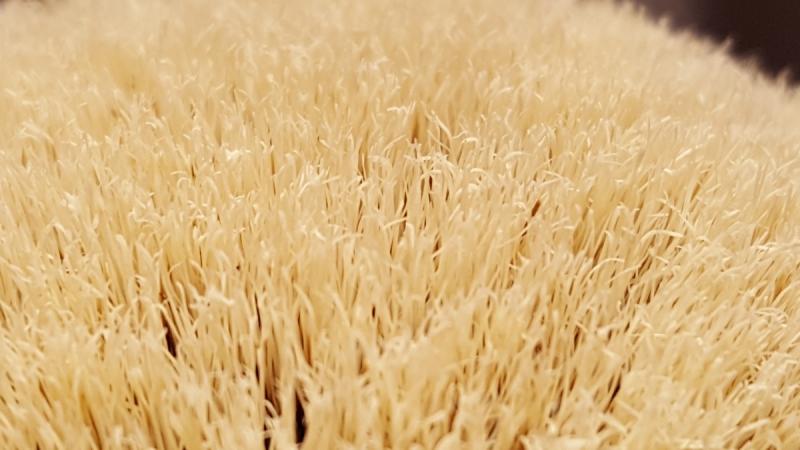 Moderator Emeritus
Sorry if I missed it, but which one had the big glue bump?

nemo said:
Sorry if I missed it, but which one had the big glue bump?
Click to expand...

The Envy had the biggest @

So do you know what time it is........................Time for My most Favorite Shave ,The Sunday Shave.
Old Spice shaving soap (sorta) MERshavings Old Timer Spice is going to pinch hit today
Vintage Gillette 1936 Aristocrat
Personna Med Prep
And all Three Badgers ,doing a three pass shave one for each pass and the winner will do the pick up pass.
Vintage Old Spice Cologne (with menthol )

Well all three knots preformed well enough to keep.
What I originally was looking for was the best knot for the money
It was my intention not to bash any of the three but it is hard not to when you pay 3 times as much for a knot you would think that it would be no contest which knot would be the most pleasurable to use ...YOU WOULD THINK.
Coming in third in my little test is the way over priced Envy White Supreme 24mm. Badger at a cost of $57 to Me.
It was just ok and did not stand out in any part of this test. I was surprised to say the least .Both of the other knots are softer and yet had better back bone. This knot also had the biggest Glue Bump and had the smallest bloom at 65.17mm
It made lather as good as the others and was a little scritchy when face lathering. It is not a bad knot just way over priced.
Next up was the least expensive of the three The Vigshave knot , you could say that it was from China but then again all three came from China . The shipping time was the longest at around 10 days.
Now for the money this one was right there with the first place knot except for one area
it was soft with back bone ,it made lather easy enough and really felt good on my face. it was the smallest of the three coming at 23.78 and it had the smallest glue bump at 20.43mm. It was second with a bloom of 65.29mm just beating out the Envy. It was plenty dense and overall a nice knot.
Now in my honest opinion The Maggard was the best of the three ,The knot in at 24.10mm and was the most densely packed of the three Bloom size was amazing at 76.54 a big difference. that is what put it past the Vigshave knot for Me .the Face feel was that of a much bigger knot and it was pillow soft and just left my face asking for more it was actually hard to stop lathering my face it felt so relaxing to Me.
So for Me The Maggard 24mm is the winner and would be My knot of choice.
Now all that said I know that they get different batches from time to time and who to say that the VS would be the winner next month ,The EWS would always be last in my book because of the mark up of the price and the quality is
not would it should be at that price. You know if I had cash to burn I would have ordered a Shavemac for this comparison
I just wonder........... I just could not justify $100 for knot. now if I could try one and it blew me away maybe then....ah the thought. 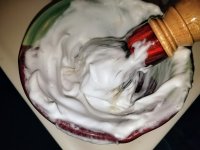 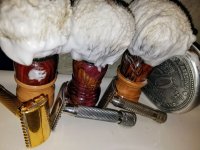 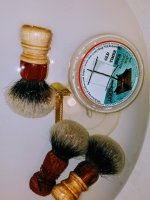 Nice looking lather and thanks for the review. I'll be ordering a few Maggard's knots the next time around. The price, while a bit more than VS, is still very reasonable.

A great and in my eyes, a very fair review! For my purchases of knots I'll probably get the Vigshave knot. Thanks for the thouough review.

I wouldn't put a fork in the comparison yet.

Like a good pair of shoes or boots, you have to use a brush several times before it hits its stride.

I'm surprised you find the Envy White so similar to the Maggard knot. Mine are different.

The current batch must be different than the Envy White brushes I have from last year+.

I'm interested that you measured how much they bloomed. I've noticed some brushes do so more than others but have never found a strong correlation between the amount a brush spreads out and blooms with how it performs.

@bakerbarber - I agree that only time will show who the true winner is. But as for blooming not affecting performance, it seems to me the release of lather is better on my knots that bloom more and fan knots in particular (which always bloom out nicely IME). My sole complaint about my favorite 2 band with hooked hairs that is densely packed and not as bloomed out as the others is that it tends to be a bit of a lather hog. This is just my experience though and could be due to the knots I use in particular and not how much one has bloomed in general.