Badger & Mixed knots in my collection and their attributes:

So I pulled a bunch of the badgers and mixed knots that still have a place on my shelf. Figured I'd break them down and post some details and impressions. Left to right is a vague "backbone/scrub" ranking. It's not a definite rank (a super dense three band has more backbone but less scrub than a moderately dense Pure, but would be placed much farther right)... but more of an impression of the combination of the two factors and how they are perceived in the shave. I guess it would best be called a ranking of most "aggressive" brush to least.


Leftmost: Rooney Finest. It's a stiff, scrubby, and high quality 2 band packed like an ultra-dense three band. Wall of badger that lathers just like a less dense 2 band (not a lather hog like 3 bands can be), and feels like an exfoliating facial in use.

Oumo/Maggards/APShaveCo "70/30" Mixed badger and boar. This is my choice for Rooney Finest Substitute. Basically like a less dense version (in fan). Bulb is a little different, but both are great knots. (Honorable mention: Semogue's Mistura brushes... less dense, less scrub, but still a GREAT mixed knot and if you're not a scrub addict, you'll probably prefer them)

Kent/Vintage "Pure". I own two of this exact brush. The second is sparse and scritchy and just bleh. This one is dense, perfectly scrubby, and my favorite vintage knot. Think Simpson Best but with 2 band backbone to the hairs. It's a GREAT knot. And I've never found another like it... but I'm sure if I tried enough good condition Vintage Pures I would eventually.

Culmak/Vintage "Pure". More typical Vintage "Pure". A bit of prickle and much less dense than the Kent beside it. Reminds me of untreated modern two-band with a little prickle. Packed similar to a Plisson (sparsely), not dense but the hair is springy enough it still lathers well.

Morris & Forndran Blonde Badger (reknotted in a Vintage Klenzo Handle ~2010 era). This is Rooney Finest (or extremely similar hair) but MUCH less dense. But the hair has so much spring/backbone it's probably one of the best two band knots I've owned. I haven't used any of the recent M&F Blonde hair, so I can't say if it's the same quality as this stuff, but this is top notch hair.

Culmak/Vintage "Best" true two band. This reminds me a lot of the 2 band Special edition Simpson Grosvenor. So I guess that means it's close to Simpson 2 band Super/ SiLVerTiP? It's ultra soft tips, good but not exceptional density. Like the M&F Blonde, an incredible latherer that clearly is top notch hair quality. If you're not a density addict, these two brushes (this and the M&F) are probably the best of the best.

Modern (not gel tip) High density two band (Oumo/Maggards/etc). Similar density to the two above, but less soft tips and less backbone to the hairs. Still a nice knot, but a noticeable step down.

10 yr old TGN Two band. Similar to the last one, but a bit less spring to the hair. Still fairly equivalent knots.

Modern Simpson Best. This is a pretty good one. A little bit of scritch and scrub, good backbone and decent density (Duke).

Rooney Heritage Super Stubby. Top end density, ultra-soft hair. This, Simpson Super Chubby's, Old M&F Three bands, D01 three band. All hit that crazy density, but three band flop realm where you get an ultra soft wall of badger lather hog. If you're a three band fan, this is probably as good as it gets.

(~10 yr old) Simpson Super. Speak of the devil. Big, Dense, This actually has a bit more backbone than usual and is my favorite 3 band brush right now.

Modern "Gel Tip" UltraHighDensity. I'm not the biggest fan of these. Tons of backbone from the two band and density, but they obliterate the tips so it's almost like you're putting a really soft cloth between the brush and your face when lathering. No real feel to it. But some people love it. It was all the rage for the past few years.

Vintage "Two Band" Not real two band, Just huge three band hair set deep. Getting into "as soft as synth" territory on this vintage badger hair. This particularly example is quite dense and lathers well; but if you're at this end of the spectrum, you're looking for the softest brush possible. *I suspect this is a now protected Badger and not available any more*

Vintage Three band "Best" (Near-Brown, I tend to call this "Golden Badger") This is another step up in softness, but is basically the same feel as the last brush... just much lower density. These aren't terribly hard to find (most vintage Simpsons come in this flavor). Finding one with good density and not excessive loft can be a bit harder. This example as you can probably tell has too much loft to avoid being floppy. Finding NOS or near NOS in this hair with low lofts is your best bet if you want this kind of knot. Anything with a big loft is going to be floppy. *I suspect this is a now protected Badger and not available any more* I noticed after taking the picture that this brush isn't a great example of this "Golden" Hair. I don't keep these very often because I don't appreciate the super soft brushes. I've attached a second picture of one that I have kept in my collection (because it's a NOS display piece on my shelf), that's a slightly better example. Basically the more "golden" the hair is the softer it is. The more "Black" it is, the less soft.

Vintage Brown Badger. This is found in a lot of old Kents and a few others. Pretty rare. There's no badger hair out there softer. I'd guess it's a fraction the shaft diameter of most badger hair. This stuff is soooooooooft. And this knot is actually pretty dense. Quite similar to the Modern Supers (Rooney Heritage Super etc), but extra soft and a little less dense. *I suspect this is a now protected Badger and not available any more*

A look at some vintage "Golden" badger. 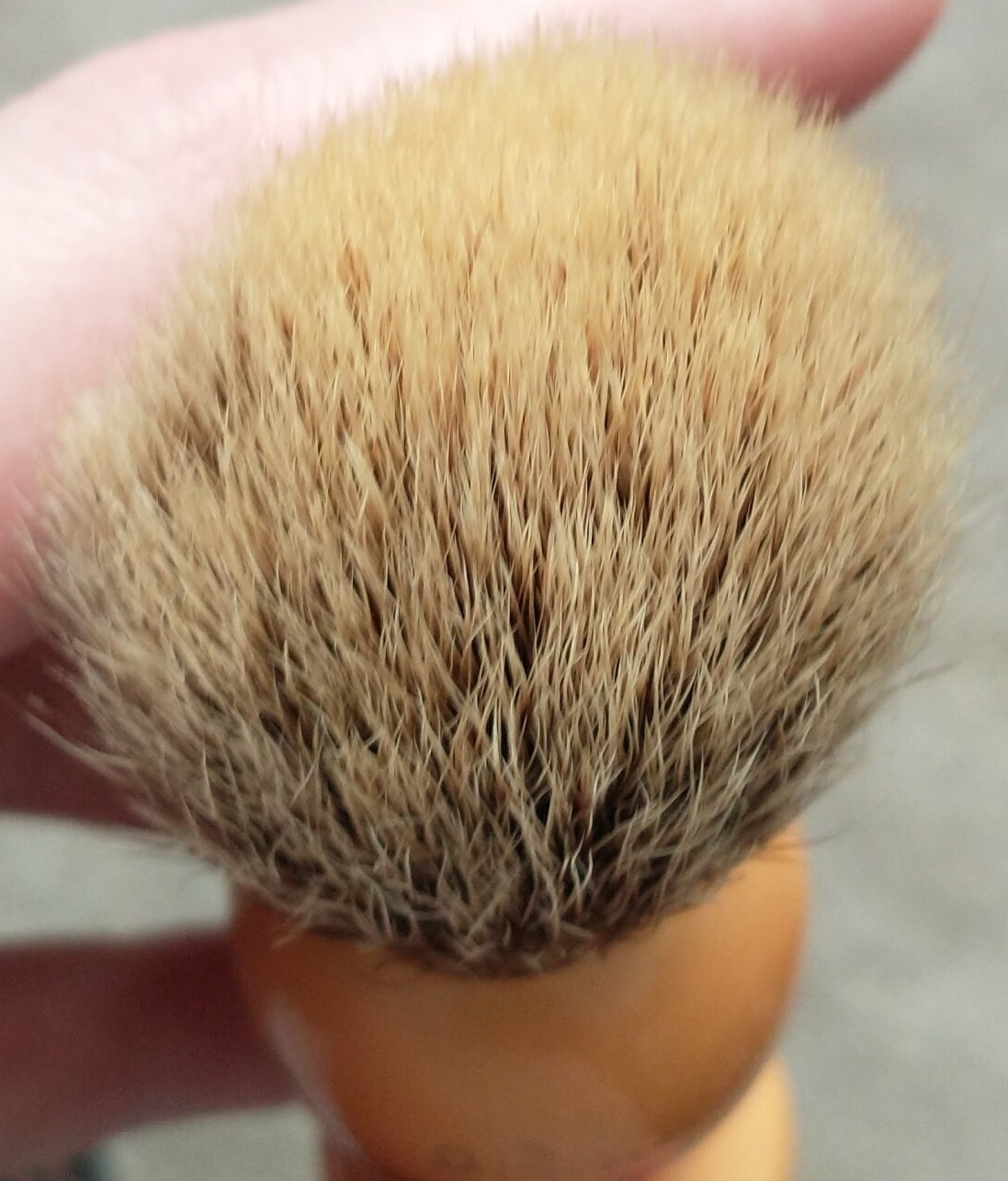 Also if you look in the first picture. That "Golden" brush I took the close up of is actually directly behind the reknotted butterscotch between the faux ivory Culmak and the Tall wooden brush. So you can contrast the "golden" badger with the white tips on a modern two band. This is a fairly pale "golden" they can be much darker and some reach the depth of brown of the vintage brown badger at the far right of the group shot. 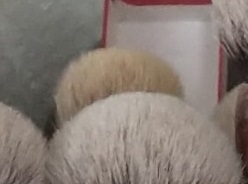 Great collection!! Thanks for the reviews!

That sure is some collection.

Niiiiiice. Can't wait to get my Maggards/Oumo mix knot.
L

Nice brushes! Number 11 in the Eagle shape - what is that material?

MyCarver turned that one for me about ten years ago. If memory serves, I told him something similar to what I told you. I like character, spalting, knotty pieces, etc. When I first posted it here and someone asked about the wood he said:

A friend of mine has a mill in Africa and he gives me samples of a variety of woods. This the locals called Cay-cay. I'm not sure of the exact species but it has characteristics of Mahogany.
Click to expand...

That one is sweet indeed. I’ll have to ask some friends if they know it by that name. Really cool looking character to it.

So I snagged a (used) Simpson Manchurian recently and was using it for the second time today and was curious how it compared to a few other knots I have.


First thing that was noticeable is the gel tip didn't feel like it had any individual hairs. No real character. The 10 yr old 2 band was leaning that way but still had some character. The Simpson you could tell had a bunch of springy hairs on your face, and the maggard (not gel) did as well. The maggard was much less dense than the Simpson, but actually felt a tiny bit more scrubby. If Maggard has a knot packed as dense as the UHD gel but with the standard (not gel) hair... that would be a really nice knot at the price (The UHD Gel is DENSE). I suspect they don't pack the non-gel that dense though because it would be quite scritchy at that density.

What Really gave me some insight in why I'm not in love with the gel tips came as I rotated between the brushes for each pass. The Gel tip didn't give as good a pass as any of the others... and my theory why is that the hairs are so broken in that my whiskers just push the hair tips out of the way, not the other way around... meaning the gel tipped brush doesn't get the lather in good and deep around every follicle the way a proper two band badger SHOULD. It really felt like the gel tip brush wasn't applying lather or standing up my beard nearly as well as the other brushes (especially the Simpsons and Non-Gelled Maggards) were.

Having said that, The Simpsons Manchurian really didn't strike me as anything different than a high quality two band. I've read folks claim that they can be scritchy like D01 2b and Rooney Finest, but I got very little of that from it. Maybe because the brush was purchased used... but the tips don't appear broken in the way my used (and not scrubby) Rooney Finest was... so I suspect it's not very heavily used and this is pretty accurate to how the knot started out.

Given that, I'd place it (Simpson Manchurian M7) just to the right of the Ivory Culmak and left of the Maggard 2 band (not gel tipped).

Thank You SliceOfLife ----- both your initial posting and the one right above .....

very well written !
You must log in or register to reply here.

What Badger Shaving Brushes Do You Recommend?
2 3