Alrighty fellas - we'll unleash the BBE's we've been siting on (about 150), but i'll be honest, they're not as nice as the last ones, as the knots are not as dense. Since I'm obsessive compulsive when it comes to consistency, these will likely be the last of the BBE's, but to be very clear - they're not floppy, or of poor quality... they're just not as dense as the last batch and I don't want each batch we get in being different than the last.

UPDATE: It's up - and online. Link is HERE - NOTE: It is $58 because shipping has been added, IE there is no shipping charge.

Below is the difference between this batch and the last - on the left is the previous batch, on the right is the existing batch. 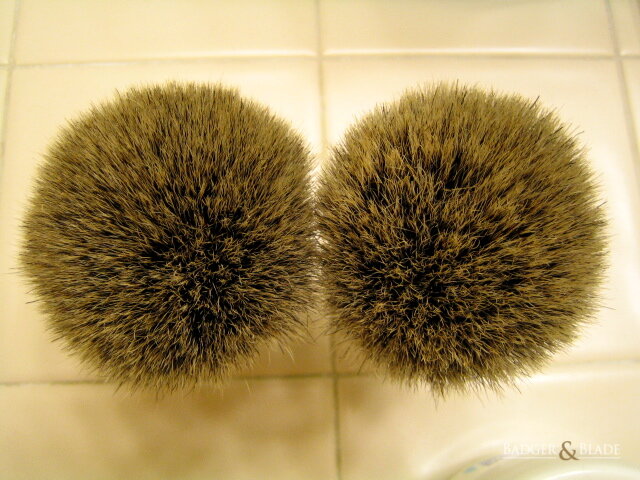 Wooo Hooo! Now its just wait until the order info gets posted. Patience....

I hate to ask, but will it still be a big step up from my CE BBB?

Even if it performs half as good as the ones from the initial run you can be sure they will outperform many of the mid end and some of the top end brushes in the market.

Looks good, I sold my round one and I hate myself

R-James said:
Looks good, I sold my round one and I hate myself
Click to expand...

Looks good in the pic. I'm using the C&E BBB now, and just ordered a Shavemac because I was tired of waiting for the Essential.

Now I have to decide if I should buy the Essential anyway (DAMN YOU!

R-James said:
Looks good, I sold my round one and I hate myself
Click to expand...


I have both the BBB and the BBE. I like the BBE much better.

Sure... sure... just do this the day after I finish explaining why I don't need new brush to wife/daughter. I was trying to grease the wheels towards a Goodfella. Now this is an option. Oh well... ya lose some... and you fail to win others.

I assume the order information will be posted in a painfully obvious fashion. Amiright?

If I miss my chance on this brush because I have to go to my company's holiday party I will be seriously peeved...

awesome news, I can't wait to place my order!

watch me miss out again because of another emergency...

Sorry for my ignorance but, are these an item that I had to preorder/reserve?