My G1 arrived yesterday afternoon and I was able to use it this morning with a 3 day growth. I did my usual prep with a shower. I loaded a PTFE blade that had been used 3 times in a MMOC, then whipped up my usual bowl of Arko and did the deed.

The shave was incredibly smooth. The very smoothest shave with a GEM blade I have ever experienced. I found it very easy to find the angle, and more importantly for me, to adjust the angle as needed. I think this may be because of the curved top rather than the flat surface of the GEM vintage razors, but for whatever reason, it was very easy and intuitive for me to feel the blade and make slight adjustments as I went along. A little steeper here, a little shallower there, etc. Buffing has never been easier for me with a GEM razor.

So the shave result? Not the closest shave I have ever experienced, but a very even, consistent shave. No irritation, no weepers, no raw skin feeling of any kind. Barely registered tingle of any kind when the witch hazel was splashed on. This is without a doubt the best comfort to closeness ratio I have experienced. Well, that's not true. I would have to say my ATT SE2 will give me the same ratio, BUT only with a 4 or 5 day growth and a blade with less than 4 shaves on it. The SE2 shave will be closer, the comfort will be the same if I am very, very careful. However, I have never been able to get a comfortable shave with the SE2 or SE1 with less than a 4 day growth.

I ordered the G1 because I wanted a modern GEM razor, the head was $99, and I have been looking for a mild razor I can use more often than every 4 days without discomfort. So far I am thrilled with this purchase. The next big test for the razor will be in two days. I have never been able to achieve a DFS without discomfort with a 2 day growth. I am hopeful.

The "fiddly" aspect of the razor comes up often in discussions regarding the G1. That little threaded hook part does not bother me at all. Yes, it's not as user friendly as a traditional 3 piece razor, but the GEM blade itself demands some sort of change from that DE razor design. I think Blackland and ATT have come up with the best solutions. Shane from Blackland himself has stated his admiration for the ATT G1 design. In both cases, the blade is held securely, clamped right in the middle of the blade where it needs to be. IMO this is more rock solid than any of the vintage GEM razors. I look forward to purchasing a Sabre in the future. As far as that little piece falling down the sink, I would point out that it is very easy to loosen the razor enough to remove the top cap and blade while having the baseplate, threaded hook piece, and handle all still attached to each other. I do this to rinse off the pieces, then take everything to a table to fully disassemble, clean a dry. With as OCD/fanatic as I am about cleaning my razors, this does not bother me in the slightest. However, if you like to just rinse and shave off, it won't work very well. After a shave the inside of the razor and blade will just not get all the soap out with a rinse. If you loosen the razor it probably will, but if you loosen it enough to remove the blade a cap for a good rinse, you will not (or should not) be able to shake off the handle, baseplate and threaded hook without some damage unless you snug them up to each other. So yes, a bit more care is needed, a little bit more "fiddly", but IMO not nearly as much as some people think without having used the razor. But I would have to say if you want classic, super simple 3 piece where you do a quick rinse and put it away, this razor is probably not for you.

I think this is an elegant , ingenious design and a wonderful shaver. I strongly suspect that ATT is selling old stock from Stan's time there and once they are gone they will be no more. This is only a guess on my part. I do not pretend to know anything, but I really think this is so and I'm glad I have one of my own.

This is the most I've ever written about any razor. I will follow up with my two day shave on Saturday.

Good write up, I was curious about them but have several gem 1912 styles I rotate through and a few others I haven't tried yet. Still not sure if I like my Se1. It's made very well , but the width I am not used to.
J

GeronimoWSB said:
Good write up, I was curious about them but have several gem 1912 styles I rotate through and a few others I haven't tried yet. Still not sure if I like my Se1. It's made very well , but the width I am not used to.
Click to expand...

I am also not totally used to the length on the SE2/SE1. I have learned how to use them better than when I first started using them, but it is still not totally comfortable. However, for me nothing shaves a 4 or 5 day growth like the SE2. BBS and comfortable with no irritation if I do my job. I'm sure I will continue to buy razors to try, and if I ever find a DE or GEM razor that can equal the ATT SE in that department, it will go. Until then, it stays with me for more practice and experimentation. So many razors, so little time.

I was hoping you would say it was a terrible razor. I've been trying to avoid buying one of these, but it keeps calling my name.
J

So today I shaved with a 48 hour growth. The two day shave has always been a problem for me. I either get a lousy shave without irritation or a decent shave with razor burn. I am happy to say today was different. I got a DFS with very little irritation. Yes, there was a little bit on my neck due to me just trying to get it too close. However, it is by far the best 2 day shave I've ever experienced.

I would like to try shaving every day with this razor and see how it goes. I have never been able to shave effectively with a 24 hour growth. I always end up with plenty of razor burn and a lousy shave. However, since I worked my neck a little too hard, I'm going to have to wait two, or possibly even three days and try again. This time I will concentrate on getting the most comfortable, irritation free shave in order to shave in another 24 hours. It should be interesting.

In summary, this is the most efficient, smooth, mild razor I have ever used.

I have to laugh, because I keep trying to find "just a little more" out of the G1. I can't quit, though; it's really engaged my fanboy module.

I've decided that one of the things I most appreciate about it is that it is a fairly massy outfit with the Kronos handle. I like the Kronos: lots of knurling and the groove's in the right spot for how I hold it when going ATG. I've been switching off between the G1 and the PAA Starling V2 OC. I find the Starling too light for my comfort, but it shaves closer for me than the G1.

In my ideal fantasy universe, ATT comes out with a G2 plate and PAA makes a Starling in either 316L or their copper-silver alloy. I'd buy that, for sure.

If my choices were limited to shaving with a GEM style razor, I also would not shave every day. I've tried four different vintage GEM razors. Someday I'll get a modern GEM to see if I can shave with it every day. I really like my ATT SE1 razor in aluminum and have no trouble using it every day if I wish. But my go-to razors for daily shaving without irritation are all DE.

I find the ATT G1 to shave very close and smooth. It is the best GEM razor I have ever used by far. I put a Weber Wave handle on mine. 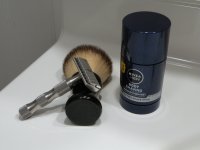 So today I shaved with a 48 hour growth. The two day shave has always been a problem for me.
In summary, this is the most efficient, smooth, mild razor I have ever used.
Click to expand...

Do you strop or cork your blades?
J

shave/brush said:
Do you strop or cork your blades?
Click to expand...

I have tried all sorts of stropping and corking. It doesn't do much for me. I think I can notice a bit of difference on the very first shave, but for me, it's not enough to bother.

If I don't strop my blades, even the coated ones, they are very rough the first shave.

I palm strop the coated blades about 10-15 seeped in each side before the first use. Takes literally less than a minute. For me it makes them smooth from the first shave.