I was recently discussing Ariana & Evans Peaches and Cognac shaving soap with @Chard52142 and he suggested that I might like this soap for shaving with a straight razor. Well, I love fresh peaches and I dearly love Courvoisier cognac. The two together are a real delight. So, I ordered some of this soap from my local brick and mortar. I didn't shave until late that day, knowing the soap was going to be delivered. When I got it, I opened it and nearly got knocked down because the smell was very strong, at least to me. It wasn't unpleasant however. Still, leaving the soap open fragranced up not only the bathroom, but also the bedroom. After a few shaves and leaving the lid off for a number of hours did a lot to tone down the smell and it became more pleasant. It is not like Courvoisier or peaches, exactly, but it is pretty good smelling. it is not my favorite, as it smells a little medicinal, especially at first. However, this tones down and it becomes pretty nice.

My first shave went like this: I put some water in the top of the soap and let it sit while I showered to soften my beard. I poured that out and wet my Rudy Vey with a 25mm Muhle fiber knot (pictured above), shook it out gently three times, and started rubbing it in the soap. It lathered very, very quickly. It lathered more like a good cream than a hard soap. I then used my bowl to finish raising a good, rich lather. I painted my face really well, once adding a little water to the tips of the brush. I took the above Thiers Issard straight razor and made a stroke from North to South, starting at my short sideburn to my jaw. The razor glided like it was on air, or ice! I could barely feel there was a razor, and then only because of contact with the skin. It was stunning. I have never experienced that, before. I finished up that pass and then re-lathered. This time I made South to North strokes against the grain (mostly). It was glorious! I've never had such a smooth, gliding shave with a straight razor. I have with a couple of DE safety razors and a properly sharp blade, but never with a straight. My only issue was that because the soap was so slick I shaved a little close and I could feel it later. My face was mostly BBS and I wasn't trying for that.

Each shave afterwards produced the same results and the residual slickness is the best I've ever found. I learned I can go back and touch up areas without re-lathering with no issues. Even after rinsing my face and applying witch hazel, I could still feel some slickness when I later washed my face. The after shave feel of my skin was very nice. It was not dry and not greasy, but was just right.

Price wise, this soap is not too expensive. There are many artisan soaps that are far more expensive that don't do nearly as well. Overall, I liked this soap so much that I ordered some Barbiere Sofisticato. I can't wait to try it.

Sounds like a really good soap. Thanks for the review.

It's funny, when I smell it in the tub it comes off as one of the more pungent scents, but when I lather it, it's one of the most pleasurable scents and a wonderful shave. A&E makes great stuff and this is my favorite scent.

I agree, it gets much better with use and time. The shave quality it gives is fantastic.

To those who have tried them, What are your thoughts on A&E socal hipster and Asian Pear?

Ariana & Evans Peaches and Cognac, Incredible!
I also was taken back a little bit by the scent in the jar because it was so strong but after having used it I find the scent just incredible and intoxicating. So far I found that the razor glide is just as slick as could be and I'm getting a good BBS shave with good face feel when done.
For me, this is an amazing soap.

Agree 100% with the review !
Really great soap
You know gents if there is another A&E soap with the same slickness level ?
Thanks

I think any of them that has the Kaizen 2e base would be that slick. My other A&E soaps have the Kaizen base, but only the Peaches and Cognac in my collection has the 2e base. I do have some Amber Rose in bound with the 2e base, so we'll see.

Doc Dan said:
I think any of them that has the Kaizen 2e base would be that slick. My other A&E soaps have the Kaizen base, but only the Peaches and Cognac in my collection has the 2e base. I do have some Amber Rose in bound with the 2e base, so we'll see.
Click to expand...

Thanks for reply me .

Drew said:
To those who have tried them, What are your thoughts on A&E socal hipster and Asian Pear?
Click to expand...

I've only had it this winter and Pineapple seems to be the top note along with banana and mango and something about how the tropical fruit mixes with the cade/oakmoss/sandalwood/cedarwood/musk is just a little confusing to my particular sniffer. It is MUCH better on your face than it is smelling it from the tub.

I just finished a jar of Asian Pear. I liked it a lot. The scent is nice and subtle. The soap lathers well and gives a good shave. I would buy it again, but now have Peaches and Cognac on my ever-growing list.

I see in the photo you posted that it says "KAIZEN" and I wonder if it has a label on the back saying "updated ingredients"? The current version is K2e and before that was a K2 (no "e") Just curious which base version your review is for. I'm a bit surprised that your brick and mortar ordered it in and didn't receive the K2e base or did you request the earlier base?

I find this particular scent a bit too much for me but it the lather sure is a terrific performer! 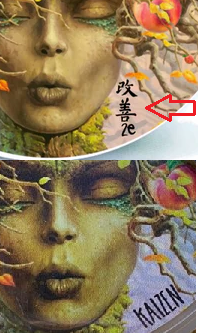 I assumed it was the Kaizen, but it isn't much different from the Kaizen 2e that I also have. Perhaps it is the 2e but doesn't say so? Every soap A&E makes has slightly different ingredients. All might be the same except for beeswax or the addition of clay, etc. At least in all of the soaps that I have.
You must log in or register to reply here.