Came across a NOS bottle of JB Williams era Aqua Velva Ice Blue on the bay for a steal, looks to be from 2001 (the sticker on the cap touts a giveaway of a 2002 Monte Carlo), which is right before AV was sold to Combe, Inc. There were subtle changes on the bottle when Combe took over, they seem to like the phrase "Firms and Tones" which was absent on the JB Williams bottle. The color of the Combe version is slightly more clear, but that could be attributed to the age of the Williams. As far as the scent they are very close, and the jury is still out because I haven't used the Williams yet, but from my hand, it seems to become smoother as it dries down, like maybe some of the notes like sandalwood and moss are more forward. But again, this could be the exact same formula, just affected by age. Either way, I was glad I could pick it up since so many others are starting to price gouge AV Ice Blue in glass. 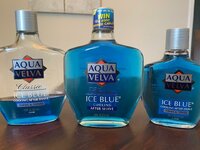 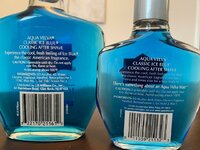 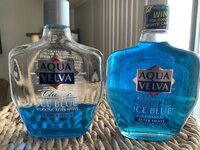 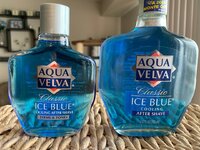