Mike M said:
Says a man who never misses a chance to try and persuade anyone who'll listen to buy a Simpsons brush
Click to expand...

...all the while while remaining in good standing in the restraint myself... you forgot that part.

SharpieB said:
The GC .68 SB and Jaws are both excellent IMO. The .84 Jaws is very aggressive but I like it for a few days growth.
Click to expand...

I put the CG.68 SB head on a short light aluminium handle (Windrose, the model was RA3 I think), and got a big improvement in agility. It's currently my favourite razor.

Result: A fantastic 3 pass BBS shave, with no weepers, irritation or other issues. Smell very tropical.

Mike M said:
Still in
View attachment 1253952
Tonight's shave is a chance to use the soap I would most like to 3017, lathered with the Omega professional boar PIF'd to me by @Multum in parvo as it is a total monster when it comes to eating lather and the more of this soap I use in a single shave the better. For the shave I used the Parker 26C/Personna platinum combo, one of my favourite razors and my favourite blade.
OK the blade and razor performed really well, the soap on the other hand performed like Arnold Schwarzenegger in Batman and Robin, except at least you could laugh at Arnold. Every time I use it I wonder why, surely the water would be slicker on its own? Despite the abysmal soap, the razor and blade managed a DFS- with irritation which required an application of Nivea shave Balm. The sooner I 3017 this soap the better, although at current usage rates It will probably end up being passed down through several generations as a family heirloom.
Click to expand...

If that is Wilkinson in a tub then just throw it out. Seriously the worst soap on the market that I’m aware of. The stick is only marginally better.

Kyle89 said:
Haha honestly the things I read about the blade alignment has prevented me from buying one in the past. I can't stand messing with blade alignment.
Click to expand...

While we are in GRUME I'll say it's a pain and fidgety so don't bother...as soon as you are out of GRUME I'll tell you it's pretty easy to align especially with blades that have no wax/glue dots

I brought up my first DE razor with which I started wet shaving a decade ago.

I put the blade in and tried to understand why I could never get a decent shave with it?

# Neutral blade exposure
# Big blade gap
# The safety bar was not straight and dented at some places.

So I tinkered with straightening the SB, it is made of soft metal so it was easy.

I decided to ride the cap as much as possible, and Viola - First decent shave with the razor.

I got BBS with 3 pass (WTG, XTG, XTG), that too with a 5 or 6 shave mileage Wilkinson Sword blade.

I get a feeling that this razor will do very nicely with a sharp blade like Feather or similar blade.

Excellent news is that now I can try all the blades provided by the fellow members, and as a bonus I get to use my first razor.

This is all the least 35 years old razor.

Couldn't be happier as I can use another thing belonging to my father. 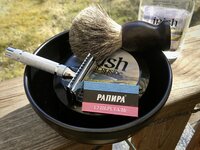 And I'm out... I have succumbed to temptation and ordered two Synthetic Simpsons brushes (Classic C1 & Trafalgar T1).

Multum in parvo said:
If that is Wilkinson in a tub then just throw it out. Seriously the worst soap on the market that I’m aware of.
Click to expand...

Throw out the soap, and fill the tub with Arko.

Still in over here ...... pretty good shave this morning

Italian Barber slipped marketing email through. I was tempted on their "VIP" build a kit but then remembered I have a lot of nice stuff already that doesn't get used enough.

Heavy_Metal_Hound said:
And I'm out... I have succumbed to temptation and ordered two Synthetic Simpsons brushes (Classic C1 & Trafalgar T1).

I wish those who are still in good luck and I see you in the next GRUME
Click to expand...

I hope that they work well for you. Was it a sale price that sent you over the edge? Either way, feel free to keep playing along at home and we'll see you in May.

Contributor
SOTD
An early one-quick-pass to start my day. SWMBO is on a photo shoot, the 16-year-old is in school, and it's just me and the dogs...in a quiet house...with phone meetings. So many phone calls. So. many. calls.

Roedeer said:
Throw out the soap, and fill the tub with Arko.
Click to expand...

This is an excellent idea, sir! I still have a black "UFO" Wilkinson tub. And since it is BIG, it just came to me... Is it possible that its diameter is big enough to contain even a Mogno soap??? I guess i will know soon enough. If yes, then i just found a soap container for it! I also have a big chromium container with lid for soaps, but i think the Mogno soap won't be in contact with the bottom of the container. The UFO might actually be better!

Heavy_Metal_Hound said:
And I'm out... I have succumbed to temptation and ordered two Synthetic Simpsons brushes (Classic C1 & Trafalgar T1).

I wish those who are still in good luck and I see you in the next GRUME
Click to expand...

I know, it is hard... I wait for delivery of 2 packages (the one with Yaqis should arrive tomorrow) and yet, i still have an itch for something more... Even though i have enough things now to join GaryTha in the 10 year sabattical... And i keep thinking...Maybe i should get one more horse brush with a nice handle that i like? Maybe grab some more soaps? Logic says "no", because i have very long brush rotation already and who knows when i will use the soaps. But still, this urge... It is fault of the forum. It is like trying to become a monk inside the Folies Bergère!

I can't wait for May to come, to get into the next GRUME. This might stop me this time!
H

FoolishMortal said:
I hope that they work well for you. Was it a sale price that sent you over the edge? Either way, feel free to keep playing along at home and we'll see you in May.
Click to expand...

No sale price. I just have been looking at getting a Simpsons brush for a while and seeing them in stock on shavenation pushed me over the edge. I guess that I've been in denial over the fact that I may be developing brush acquisition dissorder.

It's been said before and I'll say it again. Avoid shaving supply websites if you want to survive a Restraint!
J