Anyone shipped a razor to canada?

Are there any issues to keep a lookout for?

Do canada residents get hit with duties.....whats the US$ ceiling for duty?

While I've never shipped a razor to Canada (and yes, our country is spelled with a capital "C") I have ordered a few from the US & the EU and had them shipped here and there aren't any issues per se.

Like all exported items it needs to be accurately labeled with a customs declaration as the the contents, country of origin and value. If it's not something that was sold commercially (e.g. you sold it on B&B's BST forum) the value is rarely something that the Canada Border Services Agency would ask to be proved (i.e. you shouldn't need to include a receipt or other proof of sale) and you can use a CN22 form/sticker or equivalent from the post office to provide the necessary info. 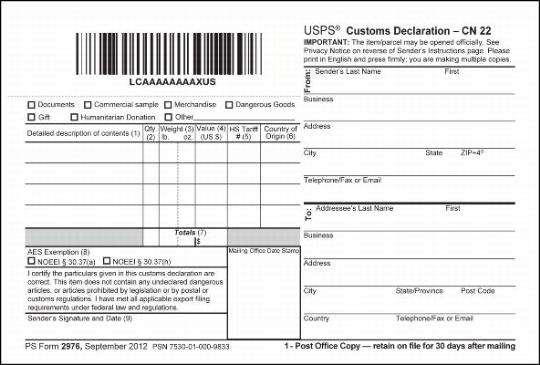 There are no duties & taxes on anything purchased with a declared value of $20 CAD or less (or about $3.27 US....kidding, the exchange rate isn't quite that bad but all values are assessed by the CBSA in Canadian kopeks). Anything that is being sent as a gift is also exempt from duties & taxes provided its declared value is $60 CAD or less. If the razor was sold and is more than $20 CAD than the CBSA can assess duties and taxes on the entire purchase amount. If its a gift applicable duties and taxes only apply to the amount in excess of $60 CAD.

As for the specific duties and taxes it depends on where the razor was manufactured. If was made in the US (or Mexico & Canada) then there is no duty, only applicable taxes like GST, PST or HST. So if you sold a Gillette Super Speed to someone in Alberta that had been restored/replated for $80 US that works out to around $105 CAD meaning the buyer would be on the hook for 5% GST or $5.25 CAD. If that same razor was sold to someone in Ontario they'd owe 13% HST or $13.65 CAD (sucks to be them). If the razor wasn't made in a NAFTA* country then there's also duty (which I believe is 6% on that class of goods).

*NAFTA is still in effect, once/if the USMCA comes into effect the de minimis amount for tax purposes will raise to $40

Now those are the rules, what happens in reality is often very different.

If I were to use my own experience as a point of reference I'd guess that of items with a declared value of $50 CAD or less only about half were ever flagged by the CBSA for duties/tax assessment. And even then the process is very simple. Instead of the package in the mailbox its a claim slip. Go to a neighborhood postal outlet, pony up a bit of extra money to keep our Queen happy and they release the package.

Not that it applies to your question but the only exception to this is tobacco (and I would assume liquor). The CBSA has literally figured out how to get blood out of a stone since they make sure to collect every last penny if you import tobacco on your own.

All this goes to say, and this is something of a personal gripe when I see "CONUS only", is for someone casually selling to a Canadian its not a big deal. There no onerous amount of paperwork or forms to complete, we know we're going to pay more for shipping so just charge us for that and the USPS & Canada Post are reasonably well integrated so rare that items go missing. We're your cheery, polite, self-effacing neighbours to the north....please, take our money.

wow....thank you for spelling it all out in such a detailed manner....apologies for spelling Canada with lower case c.

1) ONLY ship USPS - use cheapest/slowest service, premium isn't worth it
2) Fill out one customs form - write "shave items" declare $20 or $25 or less
3) It will cost you $3-5 more than CONUS
4) It will are a week longer to get here due to border and our slow PO service
5) It is safe and reliable, only slightly more, only slightly longer at the PO
6) Relax, don't worry, don't overthink - it's easy and your CDN brethren appreciate it

I've always used USD on the form and have sent more than a few to CA.

Tester28 said:
wow....thank you for spelling it all out in such a detailed manner....apologies for spelling Canada with lower case c.
Click to expand...

My pleasure & I should be the one to apologize. I came across far more prickish then intended.

Noodles said:
1) ONLY ship USPS - use cheapest/slowest service, premium isn't worth it
2) Fill out one customs form - write "shave items" declare $20 or $25 or less
3) It will cost you $3-5 more than CONUS
4) It will are a week longer to get here due to border and our slow PO service
5) It is safe and reliable, only slightly more, only slightly longer at the PO
6) Relax, don't worry, don't overthink - it's easy and your CDN brethren appreciate it
Click to expand...

As a Canadian that has ordered a lot from the US it gets here, if there are excess duties that depends on the CBSA guy that day. As an example I ordered $60 in soaps and got a bill for $13 ($3 in taxes and $9.99 processing fee) I ordered a $240 Brush showed up in my mailbox no extra taxes fees, it's hit or miss

Unless it is a new item, I always write "used razor" when shipping from CAN (where I am) to anywhere. $25 is usually my upper declaration limit, unless shipping some higher end items.
You must log in or register to reply here.

GIVEAWAY! PIF No.2 for Those Who Are Serious About Getting Into Straight Razor Shaving - Not CONUS or Canada