Anyone ever sent a straight to Thiers Issard for factory honing?

After having a discussion about a unused NOS Filarmonica 14 (Gen 1) I have and was preparing to hone with someone, they advised me to get it honed the same way it would have been at manufacturing (at a factory on a thuri wheel). The reason being that it will preserve the original grind/geometry (being full hollow and coming to a super fine point).

Now if it had been used or honed/stropped like most vintage ones, I’d do my normal hand honing progression. But since it’s still the original manufacture edge (just dull from time), I’m thinking I might try the alternative.

I’m already in communication with Thiers Issard and am just awaiting on the quote once the representative hears back from the hone master bro.

Anyone ever sent them anything, and if so how would you rate it? I’m attaching an image of the razor I want them to hone. 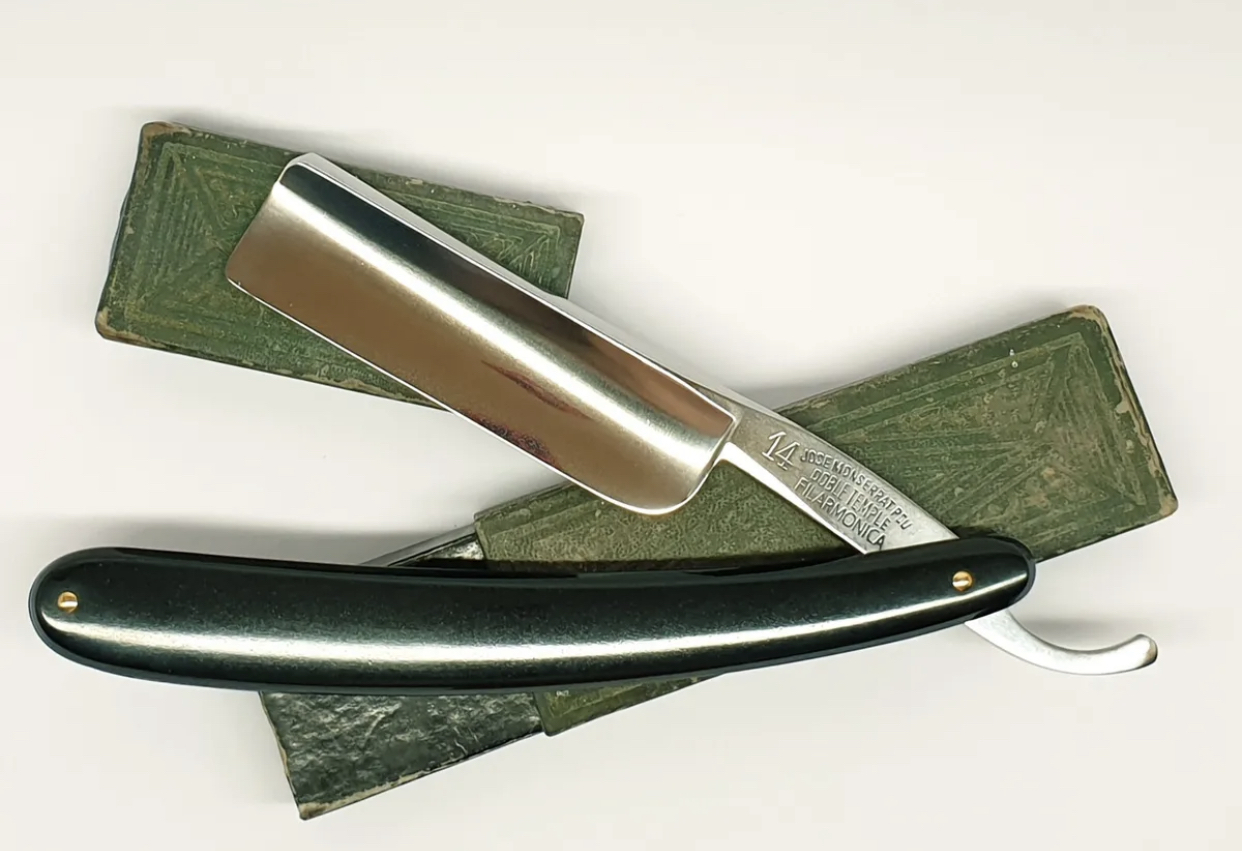 Interesting. What will happen when you get the razor back and the edge is not up to shave ready standards?

New unused Filarmonicas have gold wash on the blade face.
And I don't think (just dull from time) is a real thing.
H

“After having a discussion about a unused NOS Filarmonica 14 (Gen 1) I have and was preparing to hone with someone, they advised me to get it honed the same way it would have been at manufacturing (at a factory on a thuri wheel). The reason being that it will preserve the original grind/geometry (being full hollow and coming to a super fine point).”

And don’t have the guy that gave you that advise hone the razor either.

Back away slowly!
Then send your razor to someone who hones by hand and has done it for many years.
Not a kid that doesnt shave who gets paid minimum wage to stand next to a gind stone.
R

I have a couple of Thiers Issard blades. They are made from the very hard C135 "Carbonsong" steel. Thus, they are not easy to hone, but hold an edge better than most other steels. Thus, the overall effort in maintaining the razor is similar.

When I got my razors, one had a factory edge and the other was preowned. Neither of them were suitable for shaving until I took them to my own stones and put an edge on them. Admittedly, I have a coarse beard and very sensitive skin, so my requirements for an edge are more0 exacting than most people might have. Based on my experience with the new razor with a factory edge, I would not send my razor back to the factory for sharpening, even if I lived in Thiers.

Ideally you will learn to hone your own razors. Since the razor already has been honed, you should not have to set the bevel unless it was not set properly. Thus, you might be able to get a finishing stone to maintain the edge. A slightly coarser prefinishing stone might be helpful, but might not be necessary.

If you do not want to hone your own razors, find someone who has experience honing Thiers Issard razors. It does take more effort than honing a German razor or a vintage Sheffield, but it is not difficult.

A couple of questions:

- If it is NOS, it has a NOS factory edge on it. Why would you send it to (another) factory for the same or similar edge?

- Why do you think that the factory edge would be superior to one honed by an expert razor honer? You seem to be assuming that just because it’s a factory edge, that it is superior. Got any actual evidence of this, because most people’s actual experience with factory edges do not support this assumption.

Your profile says NJ... why not just send it to Alfredo? You'll have it back in a few days and I dare say he's probably handled more old Filis than anyone in Thiers.

Based on the new TI I have honed for people, they are the last ones I'd get to hone my razor.

Like Dr. strange said, here is one that sold recently. 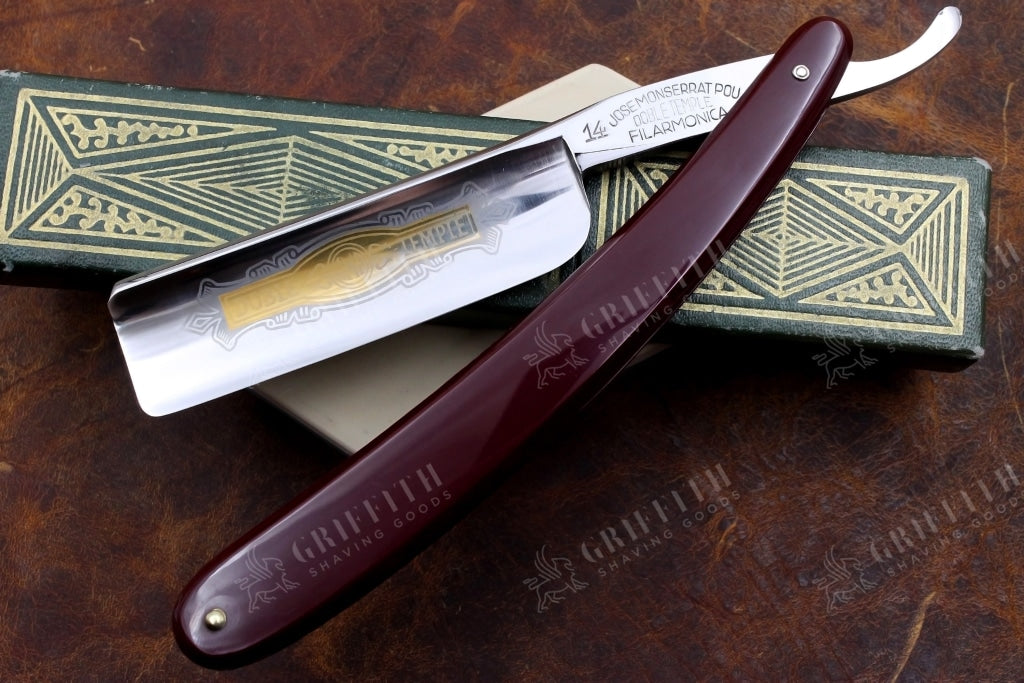 Besides the gold, see how tiny the bevel is. The reflection on your razor is much wider.

alex1921 said:
Like Dr. strange said, here is one that sold recently.

Besides the gold, see how tiny the bevel is. The reflection on your razor is much wider.
Click to expand...

They actually made and sold some without any etch. I say NOS because it came in the original box, is still at the full original manufacturer blade width, and shows no visible signs of use at all. It may have been used, unless the box is sealed (which it was not), you can’t truly verify that it’s NOS.

The things that matter most to me are that it’s still full size, original scales, and flawless condition…

It’s neat that the box came with it, but I don’t care much about that sorta stuff since I’m gonna use it and am not concerned about resale value or anything. A legit nos like that one with documents and everything would be very cool to see, but that sort of thing should go to a collector who isn’t gonna even use it. If I came into possession of something like that, I couldn’t dare use it since it would be like slaughtering a unicorn.

I have a thread on here, somewhere, about TI "shave ready" sharpening. My brand new razor had to be sent to a professional to actually make it shave ready. Oh, it would cut hair, but it tugged and struggled to do it. Not a fun shave. So off it went and now it shaves well. Don't send it to Thiers Issard. They make great razors and I am proud to own one, but sharpening isn't their strong suit.

There are probably several hundred posts on this forum about factory edges from TI not being up to snuff.
I do not recall any reliable posts claiming a TI was shave ready out of the box. None.
I do not buy into the story about the Fill needing to be honed some sort of mysterious way only available in factories.

I've honed NOS Fils, and used Fils, NOS TI and used TIs too...all went on stones, all honed well and all shaved well.
Anyone neurotic about 'wear' might consider taping the spine and not being ham-fisted.
If the edge needs to be sharpened, then it needs to be abraded and steel will be removed.
Unless the blade suffers from micropitting, the amount of steel to remove is minimal. But any sharpening is going to remove material, that's the nature of the beast.

Whether its done on a mythical wheel or a stone, the same amount of metal has to come off to establish or re-establish a serviceable shave-ready edge.

I don't see value in the factory edge past the NOS status thing. And once any 'NOS' razor is honed, regardless of how it is honed, it will no longer be NOS.

If the edge is, truly, "dull from time", then it can probably be brought up to snuff using an abrasive charged strop. I suspect that the 'dullness' present at this point in time isn't 100% due to age though. Depending on where the edge is though, actually, it may be possible to get a decent result using pastes of some sort. This too kills NOS status but if done correctly it would be pretty non-destructive.

I think that ‘dull from the time that it was honed at the factory‘ is probably more accurate.

A sharp blade would take a million years to get dull from time, unless it has rusted. Loss of sharpness due to atom exchange takes a very long time. I suspect such razors were not really sharp to begin with.

Darth Scandalous said:
Your profile says NJ... why not just send it to Alfredo? You'll have it back in a few days and I dare say he's probably handled more old Filis than anyone in Thiers.
Click to expand...

If you are not happy with the existing edge and you are in the US, send the razor to Alfredo at @Doc226. Alfredo is an expert honer who has honed lots of Filarmonica razors.

My TI purchased from vendor who also sells hones razors, honed my razor sent to me
The edge was horrible
Not even close shave ready

Like others have said, stay far away from the TI factory. I haven't seen a properly honed (by todays standards) razor come out of any of the factories. Most of the time not even the bevel is set correctly, let alone finished nicely.

@Darth Scandalous is right on the money. Going to Thiers Issard with a used Fili makes no sense to me. Why do you think a French manufacturer will match the Spanish grind? And bear in mind that honing the edge has nothing to do with the grind. Honing does not touch or change the grind!

And yes, that is not an NOS razor; the etch is gone. And hone wear is light so it was likely was honed with tape. Sending to TI in France is likely expensive and it is a hit & miss proposition, depending on the skill of the worker and if they even want to hone a Spanish razor.

If you send it to Alfredo, you will get a superb edge, way beyond what the factory can provide. And you can specify "no tape" or the tape thickness you desire. Alfredo will give you an edge that excels on the HHT test and also shaves comfortably. And for what it is worth, I have a genuine NOS Filarmonica in pristine condition that I sent to Alfredo. That razor is now beyond compare. See below. I can attest to the lack of a shave ready edge on a new in the box TI that I purchased in France last Friday, so sending a razor away to the TI factory would not be a good idea. I wasn't expecting the razor to be shave ready (I was hopeful), but the old "Mark I Eyeball" failed to pick up a shiny, polished edge, it wouldn't pass a HHT (barely snagged and tore the hair) and a few test strokes against a 4 day growth pulled and it struggled to take anything off. Under a WiFi microscope, it doesn't look to be much past a 1000 grit bevel set (if the bevel is indeed set) so because I'm still learning, I'll send it off for honing to avoid messing it up.
You must log in or register to reply here.

Why the Bevel’s Angle is Important
2 3 4