Any soaps you won't buy again?

Grooming Dept. I had 2 Mallards which have gone all rancid

I have been shaving a long time but not tried many. The earliest I recall is the old Yardley in a wooden bowl. I still miss the Yardley line. Since then I have tried Williams, some huge cylinder of unscented soap I got at Brooks Brothers, another huge nondescript cylinder at Caswell Massey, some Crabtree and Evelyn cream I loved (it had a black and cinnabar tub and a cedar/oriental scent), Art of Shaving both cream and puck sandalwood, Pre De Provence, and TOBS sandalwood. I have gotten great shaves with all of them but also with a tiny bar of hotel soap lathered with a brush in the palm of my hand. They all work. None of them had scents that made me gag. Some smelled divine. Some lasted much longer than others. I have reached a stage in life, not to mention pandemic boredom, where having a really pleasant shave is a nice indulgence, but I am also a New Englander with Scottish roots and frugality ingrained by my forbears. While I enjoyed Art of Shaving, it got used up, very quickly, especially the cream. That coupled with being expensive means I will not buy any more. I also found that Williams did not last long. It was so cheap that the fact it didn't last was no big deal, but it was not much of an experience. Pre de Provence kind of hits the sweet spot. It lathers well, smells very nice, and is reasonably priced. TOBS sandalwood is close behind, but I like fougeres better than sandalwood. I just ordered Martin de Cambre fougere. If it lasts as well as I have read, I'll be thrilled. So it would be unlikely I'd buy anything else, but I am ok with finding a puck or tub of most anything in the toe of my Christmas stocking with the walnuts and Satsumas. I'll never be that guy with the well stocked shaving den. I am feeling excessive as it is now with two soaps (TOBS and PdP), two brushes, two razors, three kinds of blades, and four aftershaves. As things are used, I'll return to my normal state of one soap and two or three aftershaves.

Eufros Cronos is one soap I won’t be buying again.
I have tried many different soaps and this one is definitely not my cup of tea scent wise.

Howdy72 said:
I spent quite a bit of money on samples searching for what would work best for my skin and the way I shave with a scent that my wife and I liked. I chose these samples based on tons of recommendations from the forums, YouTubers etc. and I chose the soaps that are listed because they were described as top tier soaps.
Click to expand...

Its interesting you say that - I just did a massive sample order from Stirling and Maggards. The great thing about samples is effectively you aren't really out if the scents aren't something one fancies. I just tried out "executive man" (the EDT sample) on my wife this morning and she said ... "Oh it smells great ... if you want to smell like an old woman!!!" .. My response

Clearly Aventus gets a lot of love and Stirling gets a lot of love - but scents regardless of consensus are really quite personal. For that reason beyond the consensus, I've tried as much as possible to get unscented versions - as that allows one to simply focus on performance rather than scent [where the EdT samples are just a way to quickly gauge the scent independent of of performance ].
P

anything from nuavia. although the scents are great, its too strong, overpowering and gets tiresome rather quickly. also considering the cost, its a no go for me moving forward.
J

GringoBandito said:
The holy black. It sure smells nice but compared to DG, storing, etc it offers little lubrications or protection.

I agree Holy Black shaving soap is little better than Williams in fact Williams shaves better.Their whole like ssucks.Holy Black you can have mine back used two times and yhey wouldn't take it back.Almost 200$ spent.They are a ripoff company with really mediocre products!

Sent from my LM-V405 using Tapatalk

Juijitsu2010 said:
I agree Holy Black shaving soap is little better than Williams in fact Williams shaves better.Their whole like ssucks.Holy Black you can have mine back used two times and yhey wouldn't take it back.Almost 200$ spent.They are a ripoff company with really mediocre products!

Sent from my LM-V405 using Tapatalk
Click to expand...

Why would they take back $200 worth of used soap? I know nothing about Holy Black but I highly doubt most other soap makers would take back used soap.

JackJ said:
I recently made my first purchase from Stirling, several samples of different products, all in different scents. Love the performance of the shave soaps, but I chose poorly on the scents. I'm reasonably confident they make some I'd like, since I don't think I'm that hard to please, but it's so hard to know what to expect from the descriptions. And I'm a sucker for lyrical descriptions. I need to re remember that I'm happiest with soap that smells mostly like soap. E.g., MWF. And even Arko.
Click to expand...

I'm very much like you right now. I've had A LOT of samples from Stirling and because it's really hard to determine what the scent will be based on the description. I've learned a lot about which scent ingredients I prefer and which ones I'm not fond of!

For your preference, and it may not read like it, but I think the "Duke" scent would be right up your alley. Very clean, classic and soapy smelling. Not what I expected from that scent list at all!

Col Conk soaps - Not because they were poor performers per se, but the scents are just...boring.

Non tallow soaps - My skin is naturally a little too oily to be using these extreme oily/butter loaded soaps. I LOVE the performance of these soaps but break out very easily, especially when the weather is warmer. This is especially true when I use those soaps and use an aftershave without alcohol to help dry things out.

Soaps without matching aftershave - So far along this journey I just prefer to have a soap/aftershave set so that I can smell like my enjoyable mornings for most of my day! Sorry MWF, I'll probably never even try you.

HEAVILY mentholated soaps - I tried it once, and it's just too much. I'll take a "hint" of menthol or an ingredient like eucalyptus that naturally gives me a slight cooling feeling any time. I just want to feel it for a few seconds on my face, not for 5 hours after the shave! haha

A & E - real solid performance and great scent, but I got some in my mouth (via my lips) and there’s a harsh soapy taste (wow, soap, really!? I know) that I’ve never experienced with any other soap. At their price, needs to be perfect.

PAA CK-6 - another great performer with lovely frangrances, but there’s a rubbery ingredient in the mix that is just cloying, and gunks up my razor. Again, too expensive for anything but a sensational shave. Note: that ingredient is in their shampoo bar too, and that bothers me much less. I’ll buy more of their shampoo. And their AS is outstanding.

Caties Bubbles and Chiseled Face - early on I thought they’d become my daily drivers. Solid products but I’ve found others that leave my face feeling better. Note: Chiseled Face AS is outstanding.

Stirling - juries still out. I used some samples before I knew what I was doing. Now that I do, I bought a full tub of Dunshire soap - wife digs the scent - which I’ve only used a few times with mixed results. Just not top tier for me, as yet anyway. Note: they are also a good value AS but don’t do anything special for my face except smell good. I bought one EDT and it is disappointing. Goes on with a chemical vibe, no depth and little staying power. Maybe a bad batch, or maybe it’s me. I have the AS of the same scent (again, Dunshire) and it smells awesome wet and dry.

B&M samples - seem so much softer than their full pucked counterparts. I can face lather a reserve from the puck nicely and quickly, and get a fully satisfying shave (B&M is in my top 3 soaps, along with Formula T and Grooming Dept.). Bowl lathering their reserve samples (and seasonals) is a totally different, and less satisfying, experience. The sample lather has far less cushion and protection. Totally different post shave feel. I wonder why?

Mickey Lee - they‘ve ceased producing, so it’s moot. Again, a real nice product, but not the cushioning or post feel experience I crave. Scents are pretty awesome, and if I could buy their AS still I probably would.

I think everyones face - and preferences - are different, and I have no doubt that any of the above products could easily be someone else’s favorite soap!
T

Juijitsu2010 said:
Holy Black soaps are pretty bad no slip or conditioning to their soap and customer service considering how much they charge is really pathetic........they should just quit.Their EDT is no stronger than their aftershave and the glass they ship with their soap is defective.....called them ....they could care less at almost 200 dollars a pop!I hope they read this as they lost a customer and as many of you that read this!

Sent from my LM-V405 using Tapatalk
Click to expand...

They lost me before I bought anything from them when I asked them a query and the horrible reply I got !
Last edited: Nov 29, 2020
T

MWF not happy with lathering my fault mostly lack of experience but I don't bother myself to learn how to get a good lather with this soap, there are many other easy lathering well protecting soaps around.

No need to apologize! I am truly sorry the soap doesn't agree with your skin type.

How does this pic on your col conk official website show the wrong case for the lime shave soap ? 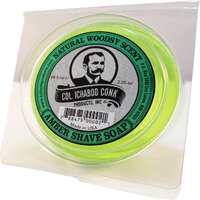 Vendor
Wrong case? That picture shows the new label design for all variants of my soap, denoting the recent formula change. A lot of suppliers still have the original formula and original label in stock. Until that older formula is sold out from suppliers it will continue to be on the market. Anything leaving my warehouse (for a couple months now) will be the new formula and labels.

Moderator Emeritus
I think he was saying that the Lime soap is labelled as Amber.

Proraso green tub. Was my first soap so I have a soft spot for it, but I 3017'd a new tub this summer and I won't be purchasing again. Very fickle and mediocre performancw at best after finally dialing it in. Perhaps the most recent formulation had improved, but I would probably go with an artisan clone like NO Northern Elixir before buying again.
You must log in or register to reply here.
Share:
Facebook Twitter Reddit Pinterest Tumblr WhatsApp Email Link
Top Bottom