Having no willpower and being a fan of Bakelite razors.... This is on the way to my mailbox.

Is any one familiar with this razor? Supposedly it's from the Czech Republic. Wait's only has the Italian Alfa info.

@TobyC: thanks, I was about to dig that out.

According to the barcode, it's made in Slovakia (starts with 858).

I don't use mine often enough, but I still think it's great. Actually thought I'd order 10 more or so to have a backup and to give away. It has more blade feel than the Merkur 45 (fully tightened), but I'd say it's more efficient. Plus, the teethy safety bar makes it pretty good for shaving longer growth. I have a Rockwell 6C on its way to me as a part of a passaround, so I've been pondering what to pit it against. Also got the iKon X3 head today, but I've been waiting for the 6C and last shaved on Saturday so there's more to mow down, so I'm waiting.
Another very nice thing about the Alfa is the head shape. Like with the Russian Saiver heads, you won't have trouble finding the angle.

It looks exactly like the Czech LNH bakelite (from the 60ies?), does it have any marking on the bottom of the handle? Iirc the LNH razors came in a nice printed cardboard box.
The LNH could be compared to a thin cap Sr, but a bit more tricky imho. At least I need to be more careful. 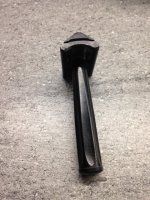 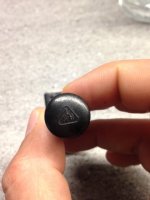 Okay so Bondage007 got me to thinking that I needed one. I checked it out on eBay and the seller had one left. It certainly fit in my "cheap but interesting razor" category and so I got one. It came in today's mail and I shaved with it tonight. Seem to be enough pics of it and so I will limit mine.

First of all, the razor is made of some kind of plastic, but I am not sure if it is bakelite. It definitely is a sturdy razor, however. Secondly as can be seen by the pics, it has a serious pent top cap, not unlike the Savier, but without the double blades. The base plate is one that has the comb facing upwards like the Barbasol and Neilite razors. For the past couple of weeks I been trying out diagonal slants like the Merkur 75 and the new PAA AES. Both had pent tops with the PAA being pent on one side only, and so I know the drill with the pent caps.

I loaded a Nacet blade that had been used probably more than it should have and lathered up. First pass was WTG. I used a very shallow angle, resting the side of the top cap flat against my face.I was surprised that there was significant blade feel against my face and so I immediately lessened the pressure and took longer, slower strokes. The first pass was not as clean as I wanted and so I hoped for better in my second pass, which was ATG. The ATG pass was a little rough and so I had to be aware of the pressure and did shorter strokes. I was hoping for a two pass shave, but most of the area under my chin and neck definitely needed an XTG pass. In the end I came out with a 2 1/2 pass DFS. The shave itself was not the most comfortable I had and kind of compare it to the PAA BOCS, but not as efficient.

This definitely was an interesting razor and I think the next couple of shaves will get better with it. 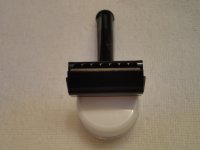 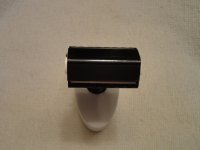 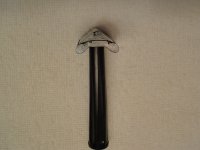 Oh and @romsitsa, this is the emblem on the bottom. It is also a triangle, but different from yours. 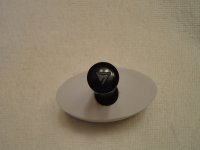 It looks like they simply reused the old molds after modifying the emblem.

I can not find any paypal supporting cheap source for these. Would be interesting to try.
You must log in or register to reply here.