Again with the Summer Hats

Okay, This one is a long one, to describe conditions and set up requirements. Cue The Rolling Stone's I Can't Get No Satisfaction. Have went through two hat types this week, neither satisfactory. The problem is variable weather conditions.

First choice is the classic Panama Hat, a tight-weaved narrow straw Fedora. This was my choice starting last Sunday due to summertime scattered showers. While it lets some breezes through, it feels surprisingly hot. Before the showers started, the area around the brim was well soaked with sweat. When it did start to rain, it kept it off my head and out of my eyes, but the straw became soaked. Managed to put it where it could dry and keep it's shape, but, of course, it has staining starting around the brim. This is what does in my Panama Hats for dressier wear.

The mornings the first of the week were cool enough for jackets (low 50s Fahrenheit/ low teens Celsius), which ruled out my well ventilated lifeguard/farmer type straw hat that I usually wear this time of year until I have to put on my hard hat. The Panama worked well enough in the mornings, though it let in enough breeze that it wasn't a perfect choice. By late afternoon we were back into early summer time temperatures (about 90° Fahrenheit/32° Celsius), and the Panama worked somewhat well.

In the latter part of the week, mornings were warm enough (mid 60s Fahrenheit/upper teens Celsius) that I got by with the straw lifeguard/farmer hat. It has a nice, wide, brim for descent shade, with ventilation holes in the crown. Then came the sudden shower. We're talking about the sudden downburst. Not the heaviest we get, but enough for windshield wipers on low. Here the disadvantages showed. This type of wide straw doesn't seem to take moisture as well as a Panama, and the open ventilation lets the rain right on in. That relatively brief exposure had the potential of more damage to the hat than to the Panama. Fortunately (this exact style, a bit dressier that the typical style and is hard to find locally now), I was able to hang it up and let it dry while it retained its shape.

Next week's forecast might be dry, but with temperatures near 100° Fahrenheit/38° Celsius. If it doesn't rain, the straw lifeguard/farmer hat will work just fine. And yes, we've had showers and thunderstorms with higher temperatures.

In my younger days, I wore a baseball cap and let it go, sunburned ears and neck and all. Caught in the rain? The brim kept it out of the eyes while the rest got drenched. I was already trying wider brims in my early twenties, and they seem to work better, and I guess the full brim hardhats spoiled me. Unfortunately, I can't seem to find a single hat type that works for these variable summertime conditions.

Last night I mentioned the pith helmet again, and the family wasn't happy with that at all due to the costume effect. But it has a rigid shape which would hold up in the rain. I've looked at the local boonie hats, and they're just too floppy and have insufficient ventilation. I don't see them working well in a sudden soaker. The mesh crown type had a wide rigid brim and solid top, and the mesh provides ventilation, but I don't know how it would do in the rain.

That leaves me stumped. I suspect the hat I want may not exist; a wide brim, rigid enough to take the rain, and comfortable in temperatures from 50° Fahrenheit/10° Celsius to over 105° Fahrenheit/40° Celsius.

For those sudden showers a jacket/raincoat with a hood so the hat is moot?
dave

Cool, dry and UV rated. Plus the built visor keeps the brim up.

This one is on my wishlist
Recycelter Tarp Hut

davent said:
For those sudden showers a jacket/raincoat with a hood so the hat is moot?
dave
Click to expand...

At the upper range of these temperatures, they tend to get uncomfortable. They're also difficult to carry around, unless it's one of those semi-disposable thin plastic ponchos.

Cool, dry and UV rated. Plus the built visor keeps the brim up.
Click to expand...

That's the boonie type. Dollar General has a similar version. How well do they work in the rain, and how comfortable are they at 105° F / 40° C?

Raissermesser said:
At the upper range of these temperatures, they tend to get uncomfortable. They're also difficult to carry around, unless it's one of those semi-disposable thin plastic ponchos.
Click to expand...

Yeah i could see the hassles and heat being an issue. I can get away with a baseball cap, jacket/hood or umbrella up here in my more temperate environs.

Is there anything out there that ticks all the boxes except rainproof but comes with a light, easily stowed rain cover that could be deployed as needed then stowed again after the fact?
dave

Ambassador
Mil spec, made by the lowest bidder, US military jungle boonie hat.
Thousands of servicemen can’t be all that wrong.....

Do they they had no choice in the matter?
dave

Ambassador
Sure...if they want to pay for it hip pocket. Point being the GI issue hats are/were excellent. Cynics will always be quick to snap up that just because anything is “mil-spec” means little when it comes to quality of the item in question because it was made by the “low bidder”. It does however meet the pre defined criteria....

I like a cotton bucket hat for something that stuffs into a pocket easily. Good enough for light rain, but not heavy downpours.

With practice you can throw it like a frisbee to bring down horse-flies indoors.

If I think it will be sunny, then a white Panama.
Most of the time though, it's a sort of fedora with mesh sides. Apparently they're called "Safari Hats".
Somewhat like this one:

Mine is made for the Wind River brand and is 85% cotton, 15% polyester.

davent said:
For those sudden showers a jacket/raincoat with a hood so the hat is moot?
Click to expand...

Not if you need to wear prescription glasses.
For rain or snow I have to keep it off the lenses.
Last edited: May 18, 2019

John Rose said:
Not if you need to wear prescription glasses...
Click to expand...

I am cursed as well, worthless in the rain and snow, better to be done with them and just remove. Plus an eye with no blink reflex and remains open to the snow, ice and wind that is guaranteed to get past the glasses, squash goggles help.
dave

Mrs. noekekal surprised me with this hat last week. I don't like hats as most won't fit and are annoying. A Henschel Breezer Aussie No. 5031-82. It's even in 2XL which fits my fat size 8 head. It's actually comfortable and has been cool.

Of course Texas has remained cooler than normal this May. Still, it's bound to help in July.

Henschel Hats - Manufacturers of Fine Headwear in the USA since 1947

Acmemfg said:
Mil spec, made by the lowest bidder, US military jungle boonie hat.
Thousands of servicemen can’t be all that wrong.....
Click to expand...

What's on my mind about that is that originally they were purchased from locals. That means it was a type of hat wanted by US GIs in Vietnam. Dimly remember a wire fame type cap worn by the US military, and the classic "tent shaped" cloth cap, and am aware that the WWII/Korean/Vietnam era helmets got heavy and were probably hotter than modern, light, hardhats. The floppiness may have been due to the materials at hand. It might be a solution, but it looks mighty laid back.

It might be a solution, but would feel mighty strange wearing it, since it seems to call for a suit and tie. I can't recall anyone wearing boaters here, yet I recall seeing Styrofoam (tm) boaters. Don't know if they were strictly novelty, or like the pressed fiber equivalent of pit helmets. 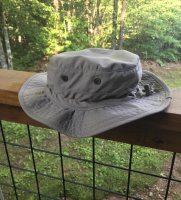 The newer versions are even better than the Mil Spec. This civilian version is a poly/cotton ripstop material. Picked it up at Smoky Mountain Knife Works. About $10. Does a good job.

Raissermesser said:
That's the boonie type. Dollar General has a similar version. How well do they work in the rain, and how comfortable are they at 105° F / 40° C?
Click to expand...

Never gets to 105 around here.. Spent my usual April and May on Daytona Beach. Low 90's with nasty humidity. To sudden downpours. Home here it's used for 2 hours twice a week while on mower, golf once a week, a little fishing and a bunch of sitting on my *** on the patio. It's always performed above and beyond. I'm not sure a Bonnie hat from the Dollar Store is similar.

Tilly's probably would have a hat that would suit your needs.

Acmemfg said:
View attachment 981918
The newer versions are even better than the Mil Spec. This civilian version is a poly/cotton ripstop material. Picked it up at Smoky Mountain Knife Works. About $10. Does a good job.
Click to expand...

I bought same thing but beige. Made in USA and has the army tag in it as well. Rip stop nylon and even screening in the vent holes. Very cool and great coverage. Cheap and high quality!
You must log in or register to reply here.
Share:
Facebook Twitter Reddit Pinterest Tumblr WhatsApp Email Link
Top