Like the title says I was free after lunchtime and the girls were out with their mam so thought I’d try to improve the stone edges on my razors. I have 7 razors which I use in rough rotation. I have four of these now with a diamond balsa edge and three with stone edges.
After making some recent improvements to my honing technique I wanted to see how it worked on the stones I have.
I was also interested in seeing how quickly each finished the razor and how they differed in feel and edge produced.
I only have the three stones which are: a small piece of Welsh slate estimated at around 12k , another much larger piece of a different Welsh slate estimated at 15k and a small 5x1 inch coticule which gives brilliant edges since I learned to use it

First I took all three razors back to 4K then 8k films to get rid of any old scratches I’d made in my earlier attempts. They all cut hanging hair with no effort.
Then I stropped all three on linen and leather, then took my Shuredge 5/8th to the Coticlue under clear trickling water.
The coticule has a nice velvety feel and makes a nice whispering sound and after 20 laps it began to stick to the stone. I lightened right up and after 10 more laps the razor wouldn’t budge and was done. 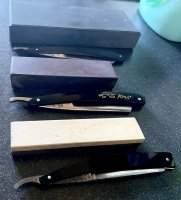 Next I did a GD 66 on the small Welsh slate using the same running water method and light touch.
The slate felt a lot silkier and glassier than the coticule, it had quite a bit less ‘draw’. After 25 it began to stick and at 35 was done completely.
Next the ELSINE 7/8th on the bigger slate.
This felt smoother again than the previous slate and I expected it to perform pretty much the same but after 30 laps there was no sign of stiction and after 130 laps there was still no sign of stiction. At 189 laps still no sign and I wondered if it would stick at all then suddenly on lap 190 it gripped the razor tightly out of the blue. I eased right off but it was suddenly so sticky that I struggled to get another lap out of it, it was strange.
Anyway that’s how I spent my afternoon off.
It was nice taking my time and comparing the feel and speed of the finishers side by side.
I feel in my bones that I’ve got the stones to work better than ever before and I’m looking forward to seeing how they shave.

Nice job, I'll look forward to hearing what the edges feel like after shave tests.

Sent from my SM-G981V using Tapatalk
You must log in or register to reply here.

B
Gold Dollar (the ones marked 'Sharpened') edge crumbles away
2